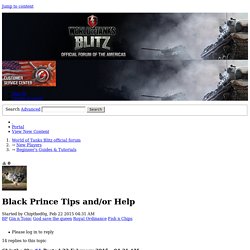 I have found the Black Prince to be a beast when top tier and suffers quite a bit at mid to bottom tier. The angled armor wall that you present when top tier is smashed to pieces by Tier 8 and 9 guns. However, it does do much better in those games when used as a second line support tank, if you can stay somewhat near your top tier heavy tanks and provide supporting fire. Your rapid ROF helps with this role. Sidescraping in this unit can make you a difficult kill due to your tracks eating so many shots. Also, make sure you have a vertical stabilizer fitted. I would also recommend download the Armor Inspector app and looking at the best ways to angle to get the maximum protection.

Here's some other random helpful notes I found through a Google search. Its not for everyone, but again, there is no single tank in the game that is better then the rest. Guide to Angling in World of Tanks. This guide explains the concept of “angling” in World of Tanks (WoT). 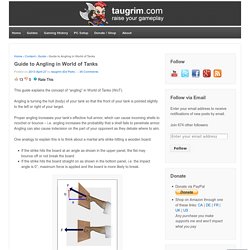 Angling is turning the hull (body) of your tank so that the front of your tank is pointed slightly to the left or right of your target. Proper angling increases your tank’s effective hull armor, which can cause incoming shells to ricochet or bounce – i.e. angling increases the probability that a shell fails to penetrate armor. Angling can also cause indecision on the part of your opponent as they debate where to aim. One analogy to explain this is to think about a martial arts strike hitting a wooden board: If the strike hits the board at an angle as shown in the upper panel, the fist may bounce off or not break the boardIf the strike hits the board straight on as shown in the bottom panel, i.e. the impact angle is 0°, maximum force is applied and the board is more likely to break. 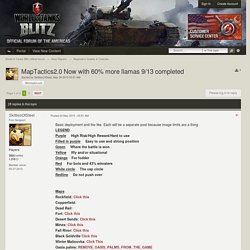 Each will be a separate post because image limits are a thing Purple High Risk/High Reward/Hard to use Filled in purple Easy to use and strong position Green Where the battle is won Yellow Iffy and/or situational Orange For fodder Red For bots and 43% winraters White circle The cap circle Redline Do not push over Maps Rockfield: Click this Copperfield: Dead Rail: Fort: Click this Desert Sands: Click this Mines: Click this. Weak Spot Guides - World of Tanks Guru. World of Tanks weak spots can be difficult to learn and very time consuming. 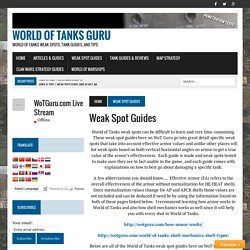 These weak spot guides here on WoT Guru go into great detail specific weak spots that take into account effective armor values and unlike other places will list weak spots based on both vertical/horizontal angles on armor to get a true value of the armor’s effectiveness. Each guide is made and weak spots tested to make sure they are in fact usable in the game, and each guide comes with explanations on how to best go about damaging a specific tank. A few abbreviations you should know…. Effective Armor (EA) refers to the overall effectiveness of the armor without normalization for HE/HEAT shells.

Weak points and vehicle data of Churchill 1. World of Tanks Strategy Guide. World of Tanks Vehicle Analyzer assesses key vehicle performance based on five critical areas :- Firepower Armor Mobility View Range Hitpoints The vehicle's stats are compared against other vehicles in its category and given a rating between 1 to 10 - with 1 being the lowest and 10 the highest. 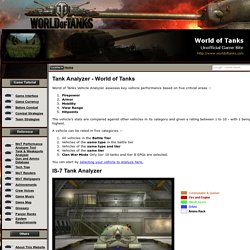 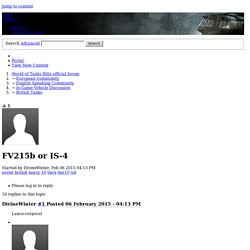 I already talk about IS4 in this post (link) and u can see my opinion about it. Regarding your question... well hard to say. I have FV215b and I am enjoying it a lot (about 60 fight with 60%+ WR... doesn't say a lot, I know), but this happened after some matches, for the following reasons: 1. Its armour is poor comparing with other heavy tier 10/9 2. So at the beginiing u'll have to learn how to use it.

The story changed for me when I started to use it as a medium. its mobility is fantastic and the reloading time awesome. Consider that one vs one you should win all the times, circling the enemy or just facing the opponent shooting faster than him (half reloading time of the E100 for example), so exactly like a medium. It is hard to use it at the beginning in the "town maps" cause u cant hide it in the usual ways (behind corners, etc...). Object 268 - Soviet Tanks - World of Tanks Blitz official forum. A little guidance... ( Churchill VII, Black Prince and IS7 ) - General Discussion - World of Tanks Blitz official forum.

I'm at a bit of a cross roads and looking for some community guidance... 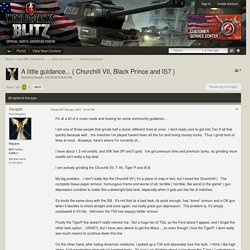 I am one of those people that grinds half a dozen different lines at once. I dont really care to get into Tier X all that quickly because well... the matches i've played havent been all the fun and losing money sucks. Thus I grind tons of lines at once. Anyways, here's where I'm currently at... I have about 1.5 mil credits, and 55K free XP and 0 gold. Statistics: P values are just the tip of the iceberg. There is no statistic more maligned than the P value. 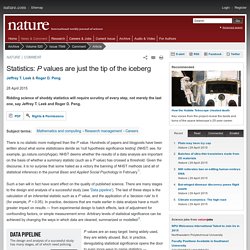 Hundreds of papers and blogposts have been written about what some statisticians deride as 'null hypothesis significance testing' (NHST; see, for example, go.nature.com/pfvgqe). NHST deems whether the results of a data analysis are important on the basis of whether a summary statistic (such as a P value) has crossed a threshold.

Given the discourse, it is no surprise that some hailed as a victory the banning of NHST methods (and all of statistical inference) in the journal Basic and Applied Social Psychology in February1. Such a ban will in fact have scant effect on the quality of published science. There are many stages to the design and analysis of a successful study (see 'Data pipeline'). P values are an easy target: being widely used, they are widely abused. Better education is a start. There are online courses specifically designed to address this crisis. But education is not enough.