The Maternally Expressed Gene Tssc3 Regulates the Expression of MASH2 Transcription Factor in Mouse Trophoblast Stem Cells through the AKT-Sp1 Signaling Pathway. + Author Affiliations ↵1 To whom correspondence should be addressed. 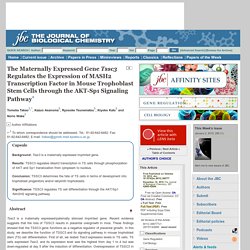 Determinants of trophoblast lineage and cell subtype specification in the mouse placenta. Open Archive Abstract Cells of the trophoblast lineage make up the epithelial compartment of the placenta, and their rapid development is essential for the establishment and maintenance of pregnancy. 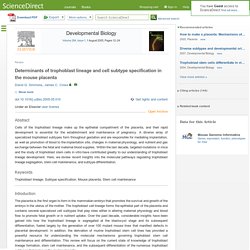 A diverse array of specialized trophoblast subtypes form throughout gestation and are responsible for mediating implantation, as well as promotion of blood to the implantation site, changes in maternal physiology, and nutrient and gas exchange between the fetal and maternal blood supplies. Within the last decade, targeted mutations in mice and the study of trophoblast stem cells in vitro have contributed greatly to our understanding of trophoblast lineage development. Here, we review recent insights into the molecular pathways regulating trophoblast lineage segregation, stem cell maintenance, and subtype differentiation. Keywords. Non-injection methods for the production of embryonic stem cell-emb...

Syncytiotrophoblast. Syncytiotrophoblast (from the Greek 'syn'- "together"; 'cytio'- "of cells"; 'tropho'- "nutrition"; 'blast'- "bud") is the epithelial covering of the highly vascular embryonic placental villi, which invades the wall of the uterus to establish nutrient circulation between the embryo and the mother. 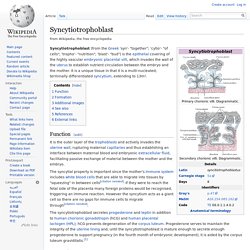 It is a unique tissue in that it is a multi-nucleated, terminally differentiated syncytium, extending to 13m². Cytotrophoblast. The cytotrophoblast (or layer of Langhans) is the inner layer of the trophoblast. 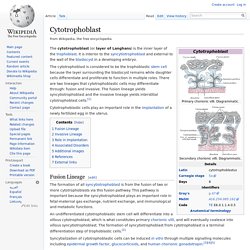 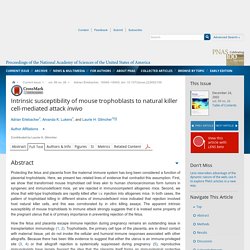 Trophoblasts, the primary cell type of the placenta, are in direct contact with maternal tissue, yet do not invoke the cellular and humoral immune responses associated with other allografts. Because there has been little evidence to suggest that either the uterus is an immune-privileged site (3, 4) or that allograft rejection is systemically suppressed during pregnancy (5), reproductive immunologists have largely favored the idea that the placenta itself forms an immunological protective barrier around the fetus.

Indeed, the available evidence has suggested that trophoblasts themselves might “intrinsically” resist immune-mediated attack (1, 6), which would render the uterine microenvironment and systemic pregnancy hormones unnecessary for the immunological protection of the fetus. Results. Differentiation of trophoblast stem cells into giant cells is triggered by p57/Kip2 inhibition of CDK1 activity. Epigenetic memory of the first cell fate decision prevents complete ES cell reprogramming into trophoblast : Nature Communications. Roles of CDX2 and EOMES in human induced trophoblast progenitor cells. 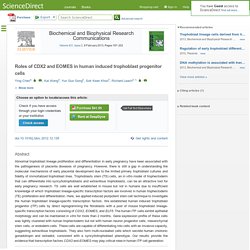 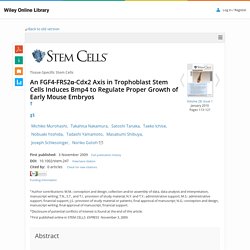 However, it remains largely unclear how growth factors control the proliferation and differentiation of stem cells in vivo. Here, we describe a novel paracrine mechanism for regulating a stem cell niche in early mammalian embryos, which involves communication between the inner cell mass (ICM) and the trophectoderm, from which embryonic stem (ES) cells and trophoblast stem (TS) cells can be derived, respectively. Complete and unidirectional conversion of human embryonic stem cells to trophoblast by BMP4. 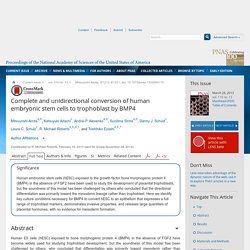 Michael Roberts, February 19, 2013 (sent for review November 28, 2012) Significance Human embryonic stem cells (hESC) exposed to the growth factor bone morphogenic protein 4 (BMP4) in the absence of FGF2 have been used to study the development of placental trophoblasts, but the soundness of this model has been challenged by others who concluded that the directional differentiation was primarily toward the mesoderm lineage rather than trophoblast. Here we identify key culture conditions necessary for BMP4 to convert hESC to an epithelium that expresses a full range of trophoblast markers, demonstrates invasive properties, and releases large quantities of placental hormones, with no evidence for mesoderm formation. Abstract There are some puzzling differences between these results and those previously published.

Trophoblast cdx2 induction. Polyploid trophoblast cell. Endoreplication and polyploidy: insights into development and disease. Introduction Polyploid cells, which contain multiples of the diploid genome equivalent, have been studied for many years, nearly as long as chromosomes themselves have been studied. 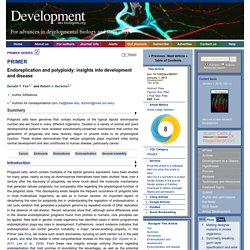 Now, over a century after the discovery of polyploidy, we know much about the molecular mechanisms that generate cellular polyploidy, but comparably little regarding the physiological function of the polyploid state. This discrepancy exists despite the frequent occurrence of polyploid cells in most multicellular organisms, as well as in human cancers. An important aspect of deciphering the roles for polyploidy lies in understanding the regulation of endoreplication, a cell cycle variation that generates a polyploid genome by repeated rounds of DNA replication in the absence of cell division. Recent advances show that, although some differences exist in the diverse endoreplication programs found from protists to humans, core principles can be applied. Development: the big picture Table 1. 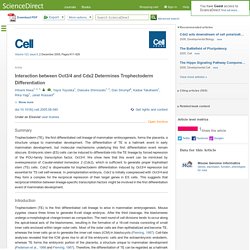 Please enable JavaScript to use all the features on this page. This page uses JavaScript to progressively load the article content as a user scrolls. Click the View full text link to bypass dynamically loaded article content. Uncovering Early Response of Gene Regulatory Networks in ESCs by Systematic Induction of Transcription Factors: Cell Stem Cell.