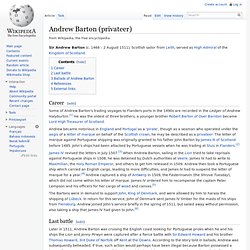 Some of Andrew Barton's trading voyages to Flanders ports in the 1490s are recorded in the Ledger of Andrew Halyburton.[1] He was the oldest of three brothers, a younger brother Robert Barton of Over Barnton became Lord High Treasurer of Scotland. Andrew became notorious in England and Portugal as a 'pirate', though as a seaman who operated under the aegis of a letter of marque on behalf of the Scottish crown, he may be described as a privateer. The letter of marque against Portuguese shipping was originally granted to his father John Barton by James III of Scotland before 1485. John's ships had been attacked by Portuguese vessels when he was trading at Sluis in Flanders.[2] 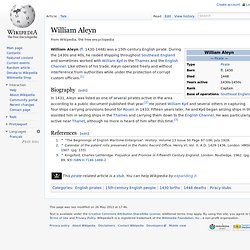 During the 1430s and 40s, he raided shipping throughout Southeast England and sometimes worked with William Kyd in the Thames and the English Channel. Like others of his trade, Aleyn operated freely and without interference from authorities while under the protection of corrupt custom officials.[1] Biography[edit] In 1431, Aleyn was listed as one of several pirates active in the area according to a public document published that year.[2] He joined William Kyd and several others in capturing four ships carrying provisions bound for Rouen in 1433. Fifteen years later, he and Kyd began seizing ships in the assisted him in seizing ships in the Thames and carrying them down to the English Channel. References[edit] Jump up ^ "The Beginnings of English Maritime Enterprise". Pirate code. A pirate code was a code of conduct invented for governing pirates, and first introduced by the 17th-century Portuguese buccaneer Bartolomeu Português. 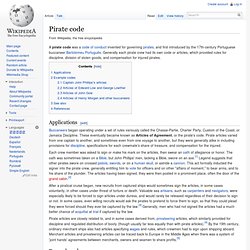 Generally each pirate crew had its own code or articles, which provided rules for discipline, division of stolen goods, and compensation for injured pirates. Applications[edit] Buccaneers began operating under a set of rules variously called the Chasse-Partie, Charter Party, Custom of the Coast, or Jamaica Discipline. These eventually became known as Articles of Agreement, or the pirate's code. Pirate articles varied from one captain to another, and sometimes even from one voyage to another, but they were generally alike in including provisions for discipline, specifications for each crewmate's share of treasure, and compensation for the injured.

Each crew member was asked to sign or make his mark on the articles, then swear an oath of allegiance or honor. Example codes[edit] Captain John Phillips's articles[edit] I. I. I. Blackbeard. Edward Teach (also Edward Thatch, c.1680—22 November 1718), better known as Blackbeard, was a notorious English pirate who operated around the West Indies and the eastern coast of the American colonies. 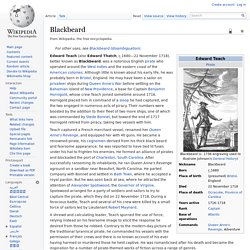 Although little is known about his early life, he was probably born in Bristol, England. He may have been a sailor on privateer ships during Queen Anne's War before settling on the Bahamian island of New Providence, a base for Captain Benjamin Hornigold, whose crew Teach joined sometime around 1716. Hornigold placed him in command of a sloop he had captured, and the two engaged in numerous acts of piracy. Their numbers were boosted by the addition to their fleet of two more ships, one of which was commanded by Stede Bonnet, but toward the end of 1717 Hornigold retired from piracy, taking two vessels with him.

Teach captured a French merchant vessel, renamed her Queen Anne's Revenge, and equipped her with 40 guns. Piracy in the Caribbean. Causes[edit] Pirates were often former sailors used in naval warfare. 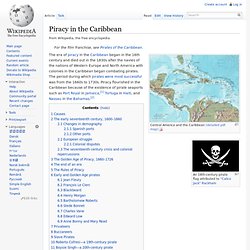 They were called buccaneers, from the French "boucanier" (to smoke meat) on a "boucan" (wooden frame set over a fire.)[3] By setting up smokey fires and boucans with the prepared meat of marooned cattle, these castaways could get a ship to draw near for trading, at which time the buccaneers could seize the ship. The buccaneers were later chased off the islands they lived upon by colonial powers and had to seek a new life at sea, where they continued their raiding of other ships. [citation needed] There they created lucrative but illegitimate opportunities for common seamen to attack European merchant ships (especially Spanish fleets sailing from the Caribbean to Europe) and seize their valuable cargo, a practice that began in the 16th century. Tortuga (Haiti) Tortuga (French: Île de la Tortue, IPA: [il də la tɔʁty]; Haitian Creole: Latòti; Spanish: Isla Tortuga, IPA: [ˈisla torˈtuɣa], Turtle Island) is a Caribbean island that forms part of Haiti, off the northwest coast of Hispaniola. 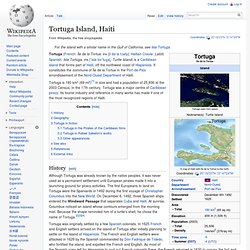 Piracy. Piracy is typically an act of robbery or criminal violence at sea. 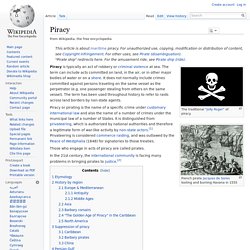 The term can include acts committed on land, in the air, or in other major bodies of water or on a shore. It does not normally include crimes committed against persons traveling on the same vessel as the perpetrator (e.g. one passenger stealing from others on the same vessel). The term has been used throughout history to refer to raids across land borders by non-state agents. Golden Age of Piracy.