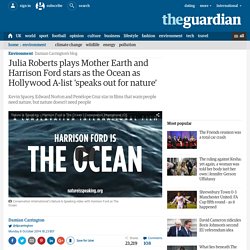 You’ve nodded off already, haven’t you? But wake up! Here are some Hollywood A-listers making a decent attempt to move beyond the obscure jargon and reveal the existential nature of what the Earth provides for humanity. The Nature is Speaking initiative is organised by Conservation International with the tag-line: “Nature doesn’t need people. People need nature.” “I have been here 22,500 times longer than you. “I have fed species greater than you and I have starved species greater than you,” Mother Earth warns. Harrison Ford as the Ocean is the most ominous. Other star turns released so far include Kevin Spacey as a cruelly sarcastic Rainforest: “Humans are so smart, such big brains, opposable thumbs. Edward Norton is the Soil, the thin layer providing the world’s food. The final film released so far is Penélope Cruz as Water. English-Guide.org. 23 maps and charts on language. By Dylan Matthews on April 15, 2015 "The limits of my language," the philosopher Ludwig Wittgenstein once posited, "mean the limits of my world. 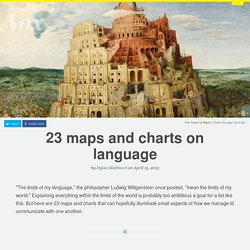 " Explaining everything within the limits of the world is probably too ambitious a goal for a list like this. But here are 23 maps and charts that can hopefully illuminate small aspects of how we manage to communicate with one another. The basics Indo-European language rootsMinna Sundberg, a Finnish-Swedish comic artist, created this beautiful tree to illustrate both the relationships between European and central Asian languages generally, as well as a smaller but still striking point: Finnish has less in common with, say, Swedish than Persian or Hindi do. Language divides Bilingualism Who in Europe speaks EnglishMany countries have more than one commonly used language, with many residents learning two or more. ​This interactive map crams in American literature's greatest road trips.

Five-Minute Film Festival: Virtual Field Trips. The dog days of summer are upon us; now is the time when all the other activities have run out. Whether you're a parent looking to entertain bored, overheated children, or a teacher already brainstorming ways to break down the four walls of your classroom in the fall, how about taking a virtual field trip? As edtech writer Audrey Watters argues, real-life field trips offer enriching experiences that virtual ones can't, but resources are not always available for in-person trips. Besides -- virtual trips can take you places that wouldn't be logistically possible in the real world. I've gathered a playlist of videos to inspire your own virtual adventures! Video Playlist: Virtual Field Trips Watch the player below to see the whole playlist, or view it on YouTube. 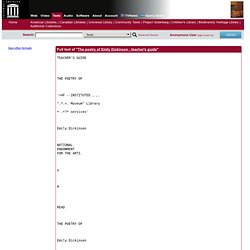 ".*.». Museum^ Library • .•? * services' Emily Dickinson NATIONAL ENDOWMENT FOR THE ARTS y m READ THE POETRY OF Emily Dickinson TEACHER'S GUIDE NATIONAL ENDOWMENT FOR THE ARTS A great nation deserves great art. vi. MuseumandLibrary AS MIDWEST The National Endowment for the Arts is a public agency dedicated to supporting excellence in the arts — both new and established — bringing the arts to all Americans, and providing leadership in arts education.

Established by Congress in 1965 as an independent agency of the federal government, the Endowment is the nation's largest annual funder of the arts, bringing great art to all 50 states, including rural areas, inner cities, and military bases. The Institute of Museum and Library Services is the primary source of federal support for the nation's 122,000 libraries and 17,500 museums.