In the Name of the Profit. Liberated Syrian Town Reveals ISIS Oil Trade Secrets. Episode 310 – How Big Oil Conquered The World. Podcast: Play in new window | Download | Embed From farm to pharmaceutical, diesel truck to dinner plate, pipeline to plastic product, it is impossible to think of an area of our modern-day lives that is not affected by the oil industry. 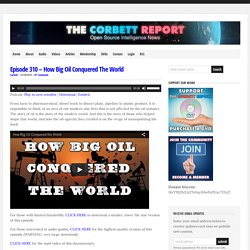 The story of oil is the story of the modern world. And this is the story of those who helped shape that world, and how the oil-igarchy they created is on the verge of monopolizing life itself. For those with limited bandwidth, CLICK HERE to download a smaller, lower file size version of this episode. For those interested in audio quality, CLICK HERE for the highest-quality version of this episode (WARNING: very large download).

CLICK HERE for the mp4 video of this documentary. Oil. Parts of that story are well-known: Rockefeller and Standard Oil; the internal combustion engine and the transformation of global transport; the House of Saud and the oil wars in the Middle East. But that story, properly told, begins somewhere unexpected. “Dr. Titusville, 1857. MUST-SEE DOCUMENTARY: How Big Oil Conquered the World. Fossil Fuels Without the Fossils? New Research Says It's Possible. Abiogenic petroleum origin. Abiogenic petroleum origin is a term used to describe a number of different theories which propose that petroleum and natural gas are formed by inorganic means rather than by the decomposition of organisms. 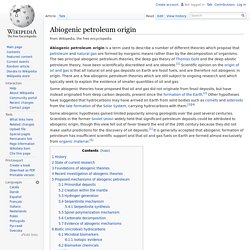 The two principal abiogenic petroleum theories, the deep gas theory of Thomas Gold and the deep abiotic petroleum theory, have been scientifically discredited and are obsolete.[1] Scientific opinion on the origin of oil and gas is that all natural oil and gas deposits on Earth are fossil fuels, and are therefore not abiogenic in origin. There are a few abiogenic petroleum theories which are still subject to ongoing research and which typically seek to explain the existence of smaller quantities of oil and gas. Some abiogenic hypotheses gained limited popularity among geologists over the past several centuries. History[edit] The Mysterious Origin and Supply of Oil. It runs modern society and fuels serious political tension. 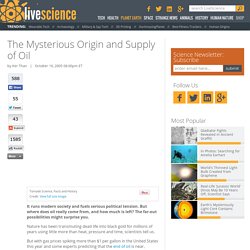 But where does oil really come from, and how much is left? The far-out possibilities might surprise you. Nature has been transmuting dead life into black gold for millions of years using little more than heat, pressure and time, scientists tell us. But with gas prices spiking more than $1 per gallon in the United States this year and some experts predicting that the end of oil is near, scientists still don't know for sure where oil comes from, how long it took to make, or how much there is. A so-called fossil fuel, petroleum is believed by most scientists to be the transformed remains of long dead organisms. 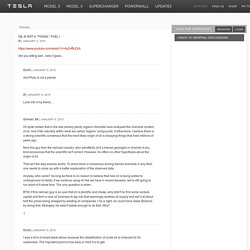 Ø | January 6, 2015 Are you sitting well...here it goes... DonS | January 6, 2015 And Pluto is not a planet. Look info it my friend... Grinnin'.VA | January 6, 2015 I'm quite certain that in the last century plenty organic chemists have analyzed the chemical content of oil. Now this guy from the railroad industry, who admittedly isn't a trained geologist or chemist of any kind announces that the scientific isn't correct. That isn't the way science works. Russians & NASA Discredit 'Fossil Fuel' Theory: Demise of Junk CO2 Science. 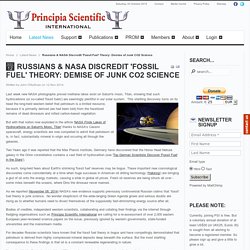 This startling discovery turns on its head the long-held western belief that petroleum is a limited resource, because it is primarily derived (we had been told) from the fossilized remains of dead dinosaurs and rotted carbon-based vegetation. But with that notion now exploded in the article 'NASA Finds Lakes of Hydrocarbons on Saturn's Moon, Titan' thanks to NASA’s Cassini spacecraft, energy scientists are now compelled to admit that petroleum oil is, in fact, substantially mineral in origin and occuring all through the galaxies. Two Years ago it was reported that the Max Planck Institute, Germany have discovered that the Horse Head Nebula galaxy in the Orion constellation contains a vast field of hydrocarbon (see 'Top German Scientists Discover 'Fossil Fuel' in the Stars'). Actualidad.rt. Este conjunto de mapas (publicados por el portal 'GlobalPost') dan respuesta a estas preguntas sobre los mayores productores y consumidores de petróleo, gas y carbón, y ofrecen más información sobre los recursos energéticos. 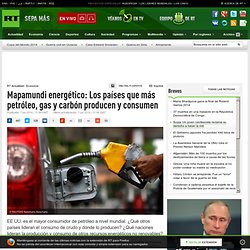 The Dirty Truth About Oil. Oil is Not a Fossil Fuel! The Real Science of Abiotic Oil and Serpentinization. On Abiotic Oil Theory, Geology, and Possible Life Origins.