Why Is Antarctica's Sea Ice Growing While the Arctic Melts? Scientists Have an Answer. While Arctic ice is melting at a record pace, a team of NASA-led researchers say they can explain why Antarctic sea ice has been edging in the opposite direction. 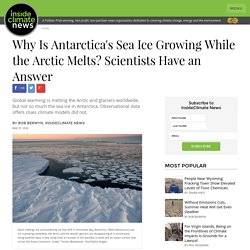 That paradox has puzzled scientists for years and given climate-change deniers fodder to dispute global warming. The group found that the icy winds blowing off Antarctica, as well as a powerful ocean current that circles the frozen continent, are much larger factors in the formation and persistence of Antarctic sea ice than changes in temperature. The mighty Southern Ocean Circumpolar Current prevents warmer ocean water from reaching the Antarctic sea ice zone, helping to isolate the continent. Just Because Antarctica Might Be Gaining Ice Doesn't Mean Climate Change Isn't Happening. 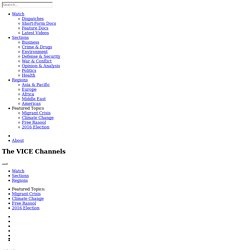 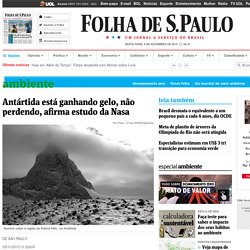 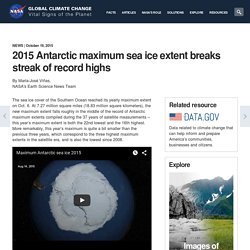 Mais finas e quebradiças. Heavy Snowfall and Cold Wave in America Not Caused by Global Warming. The heavy snowfalls during the months of December 2013 and January 2014 were caused by the excessive snow and ice deposits formed in the Arctic region during August 2013. 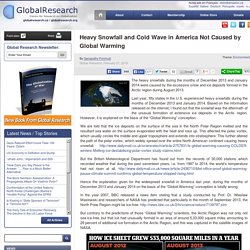 Last year, fifty states in the U.S. experienced heavy snowfalls during the months of December 2013 and January 2014. Based on the information released on the internet, I found out that the snowfall was the aftermath of the unusual formation of extensive ice deposits in the Arctic region. However, it is explained on the basis of the “Global Warming” conception. We are told that the ice deposits on the surface of the sea in the North Polar Region melted and the resultant sea water on the surface evaporated with the heat and rose up. This affected the polar vortex, which usually circles the middle and upper troposphere and extends into stratosphere. In the year 2007, BBC released a news item stating that a study conducted by Prof. 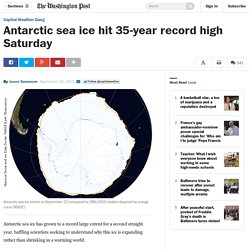 On Saturday, the ice extent reached 19.51 million square kilometers, according to data posted on the National Snow and Ice Data Center Web site. That number bested record high levels set earlier this month and in 2012 (of 19.48 million square kilometers). Records date back to October 1978. The increasing ice is especially perplexing since the water beneath the ice has warmed, not cooled. “The overwhelming evidence is that the Southern Ocean is warming,” said Jinlun Zhang, a University of Washington scientist, studying Antarctic ice. Despite Antarctic Gains, Global Sea Ice Is Shrinking. Claire Parkinson has been studying polar sea ice for about four decades. 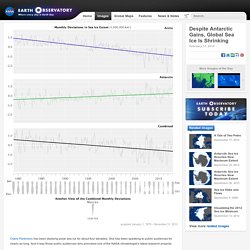 She has been speaking to public audiences for nearly as long. And it was those public audiences who provoked one of the NASA climatologist’s latest research projects. Special Report - Science Nation. Videos reveal rich upside-down world under polar ice - life - 23 January 2015. Video: Underwater robot reveals algae under ice Appearances can be deceptive. 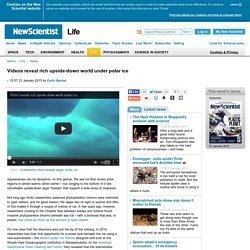 At first glance, the sea ice that covers polar regions in winter seems rather barren – but clinging to the bottom of it are remarkable upside-down algal "forests" that support a wide array of creatures. Not long ago Arctic researchers assumed phytoplankton blooms were restricted to open waters, and for good reason: the algae rely on light to survive and little of this makes it through a couple of metres of ice. 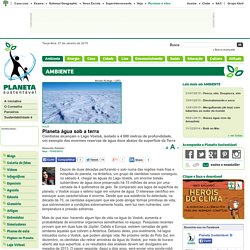 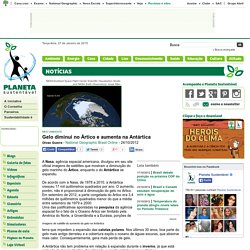 “This new, huge data volume records how the ice sheet evolved and how it’s flowing today,” said Joe MacGregor, the study’s lead author, a glaciologist at The University of Texas at Austin Institute for Geophysics (UTIG), a unit of the Jackson School of Geosciences. Subglacial Lakes Seen Refilling in Greenland. [image-50] Scientists using satellite images and data from NASA’s Operation IceBridge have found evidence of a drained and refilled subglacial lake beneath northeastern Greenland’s Flade Ice Cap.

This sub-ice body of water is only one of a handful that have been detected in Greenland and its presence sheds new light on how the Greenland Ice Sheet reacts to warming temperatures. Subglacial lakes are relatively common in Antarctica, and although recent studies have mathematically predicted possible locations for hundreds of such features in Greenland, few have actually been found. Uk.businessinsider. Vidéo > Quand les glaciers deviennent rouges...

And now it's global COOLING! Return of Arctic ice cap as it grows by 29% in a year. 533,000 more square miles of ocean covered with ice than in 2012BBC reported in 2007 global warming would leave Arctic ice-free in summer by 2013Publication of UN climate change report suggesting global warming caused by humans pushed back to later this month By David Rose for The Mail on Sunday Published: 23:37 GMT, 7 September 2013 | Updated: 14:58 GMT, 11 October 2014. Global Warming Computer Models Collapse; Arctic Ice Sheets Rapidly Expand as Planet Plunges into Global Cooling. A chilly Arctic summer has left nearly a million more square miles of ocean covered with ice than at the same time last year – an increase of 60 per cent. The rebound from 2012’s record low comes six years after the BBC reported that global warming would leave the Arctic ice-free in summer by 2013. Instead, days before the annual autumn re-freeze is due to begin, an unbroken ice sheet more than half the size of Europe already stretches from the Canadian islands to Russia’s northern shores.

Persistent Warming Driving Big Arctic Changes. SAN FRANCISCO — Not every year can be a record setter. But records are only one small piece of a larger puzzle that shows persistent change in the Arctic. And that change hasn’t slowed according to this year’s Arctic Report Card released at the American Geophysical Union’s Fall Meeting on Wednesday. Arctic Ocean temperatures in August 2014.Click image to enlarge. Credit: climate.gov Long-term trends in rising temperatures, spiraling sea ice loss, and ecosystem shifts paint a picture of a region in transition due to climate change that is transpiring at a much faster rate than the rest of the globe. “We continue to see the impact of a persistent warming trend on the Arctic,” Jacqueline Richter-Menge, a scientist at the Cold Regions Research and Engineering Laboratory, said.

The Arctic has warmed twice as fast as the lower latitudes due to the buildup of heat-trapping greenhouse gases. What Would Happen To The Climate If We Stopped Emitting Greenhouse Gases Today? Earth’s climate is changing rapidly. We know this from billions of observations, documented in thousands of journal papers and texts and summarized every few years by the United Nations' Intergovernmental Panel on Climate Change.

The primary cause of that change is the release of carbon dioxide from burning coal, oil and natural gas. International climate talks in Lima this week are laying the foundation for next year’s UN climate summit in Paris. While negotiations about reducing emissions grind on, how much warming are we already locked into? If we stop emitting greenhouse gases tomorrow, why would the temperature continue to rise? Basics of carbon and climate. ScienceCasts: Climate Change and the Yin-Yang of Polar Sea Ice. Global Warming Expedition Foiled By Ice. Antarctic sea ice expands to record high level; Arctic sea ice shrinks to sixth lowest.