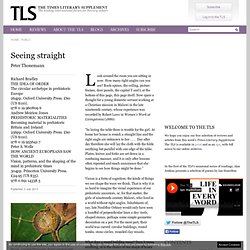 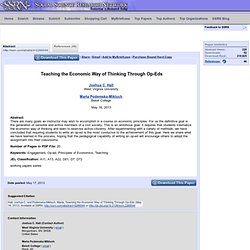 Hall West Virginia University Marta Podemska-Mikluch Beloit CollegeMay 16, 2013 Abstract: There are many goals an instructor may wish to accomplish in a course on economic principles. Number of Pages in PDF File: 20 Keywords: Engagement, Op-ed, Principles of Economics, Teaching. "As a Man Is, So He Sees" "I see Every thing I paint In This World, but Every body does not see alike," wrote William Blake. 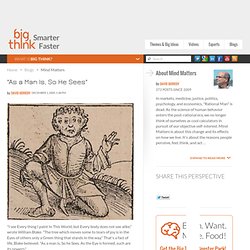 "The tree which moves some to tears of joy is in the Eyes of others only a Green thing that stands in the way. " That's a fact of life, Blake believed. "As a man is, So he Sees. As the Eye is formed, such are its powers. " Philosophy for Children. First published Thu May 2, 2002; substantive revision Tue Jan 1, 2013 In the United States, philosophy typically makes its formal entry into the curriculum at the college level. 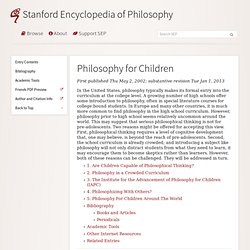 A growing number of high schools offer some introduction to philosophy, often in special literature courses for college bound students. In Europe and many other countries, it is much more common to find philosophy in the high school curriculum. However, philosophy prior to high school seems relatively uncommon around the world. This may suggest that serious philosophical thinking is not for pre-adolescents. 1. Jean Piaget's (1933 ) well-known theory of cognitive development suggests that prior to age 11 or 12, most children are not capable of philosophical thinking. Philosopher Gareth Matthews goes further and argues at length that Piaget failed to see the philosophical thinking manifest in the very children he studied.

What is likely to happen when we retaliate? TOK Art. TOK. Theory of Knowledge. Thinking About Thinking. Why does France insist school pupils master philosophy? I have been staring in admiration over the shoulder of my 17-year-old daughter, as she embarks on a last mental rehearsal before a much-dreaded philosophy exam. 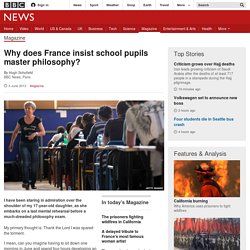 My primary thought is: Thank the Lord I was spared the torment. I mean, can you imagine having to sit down one morning in June and spend four hours developing an exhaustive, coherent argument around the subject: Is truth preferable to peace? Or: Does power exist without violence? Or possibly: Can one be right in spite of the facts? Perhaps you would prefer option B, which is to write a commentary on a text. I take these examples from my daughter's revision books. Ruby has chosen to take what they call a Bac Litteraire - the Literature Baccalaureat. There are alternative, more science-biased versions of the Baccalaureat. Teaching complete evolutionary stories increases learning. Public release date: 15-Jun-2013 [ Print | E-mail Share ] [ Close Window ] Contact: Tim Beardsleytbeardsley@aibs.org 703-674-2500 x326American Institute of Biological Sciences Many students have difficulty understanding and explaining how evolution operates. 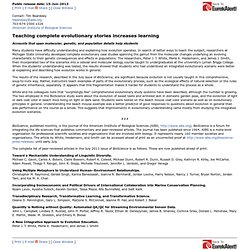 In search of better ways to teach the subject, researchers at Michigan State University developed complete evolutionary case studies spanning the gamut from the molecular changes underlying an evolving characteristic to their genetic consequences and effects in populations. The researchers, Peter J. The results of the research, described in the July issue of BioScience, are significant because evolution is not usually taught in this comprehensive, soup-to-nuts way. White and his colleagues note that "surprisingly few" comprehensive evolutionary study systems have been described, although the number is growing. The complete list of peer-reviewed articles in the July 2013 issue of BioScience is as follows. Is Math a Feature of the Universe or a Feature of Human Creation? Philosophy. Mortimer Adler Videos on The Great Ideas. 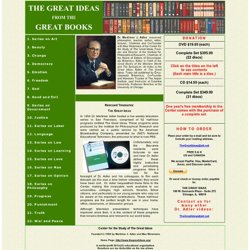 Mortimer Adler hosted a live weekly television series in San Francisco, comprised of 52 half-hour programs entitled The Great Ideas. These programs were produced by the Institute for Philosophical Research and were carried as a public service by the American Broadcasting Company, presented by (NET) National Educational Television, the precursor to what is now PBS. Unfortunately, only the Bay-area residents were fortunate to see and hear Dr.

Although television presentation techniques have improved since then, it is the content of these programs that remains timeless and relevant to our world today.