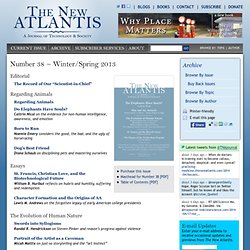 Googie: Architecture of the Space Age. The Theme Building at the Los Angeles International Airport, built in 1961 (photo by Todd Lapin, 2010) Before I moved to Los Angeles (almost 2 years ago now) I had never heard the word Googie. 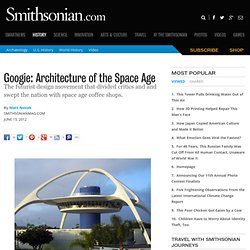 In fact, when a friend — a native Californian — used the term I initially thought it must have something to do with Google. I didn’t know the word, but I definitely knew the style. And I suspect you might too. Googie is a modern (ultramodern, even) architectural style that helps us understand post-WWII American futurism — an era thought of as a “golden age” of futurist design for many here in the year 2012. Nanotechnology - Foresight Institute. Sir David Attenborough warns against large families and predicts things will only get worse.

Sir David Attenborough has said that he is not optimistic about the future and that people should be persuaded against having large families. 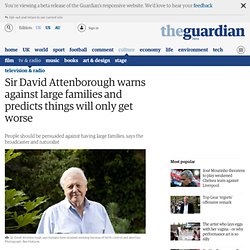 The broadcaster and naturalist, who earlier this year described humans as "a plague on Earth", also said he believed humans have stopped evolving physically and genetically because of birth control and abortion, but that cultural evolution is proceeding "with extraordinary swiftness". "We stopped natural selection as soon as we started being able to rear 90-95% of our babies that are born. Man of the Future - Alex Mar. Discussed: Patient A-1261, The Holy See of Cryonics, Impressive Human Specimens, Girls, Girls, Girls, Leonine Chest Hair, Optimism One, Piss Pots, Nature at Its Most Natural, Messengers of Doom, Linkups, A Global Network of Communes, Rootedness, The Society for the Investigation of Recurring Events, Brain Containers On July 8, 2000, a man was loaded into an ambulance, packed in with dozens of Ziploc bags of ice cubes, and rushed onto the long flight from New York City to Scottsdale, Arizona. 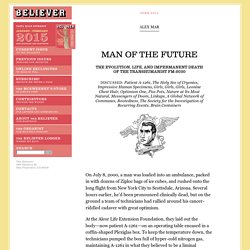 Several hours earlier, he’d been pronounced clinically dead, but on the ground a team of technicians had rallied around his cancer-riddled cadaver with great optimism. Flexian Invasion: Strange Creatures Capture the Capital! One Sunday last May, anthropologist Janine Wedel was standing in the security line at Washington’s Reagan National Airport, about to embark on a few days of field research among members of an enigmatic modern tribe. 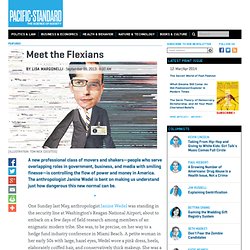 She was, to be precise, on her way to a hedge fund industry conference in Miami Beach. A petite woman in her early 50s with large, hazel eyes, Wedel wore a pink dress, heels, elaborately coiffed hair, and conservatively thick makeup. She was a picture of non-threatening propriety, costumed to move among the financial elite just as an old-time anthropologist might have worn a sarong to study inhabitants in the South Pacific. A professor at George Mason University, Wedel has spent nearly two decades combining the tools of anthropology—old-fashioned ethnographic field research and social-network analysis—with computational social science to study one of Americans’ favorite fears: corruption.

Microbes to be 'last survivors' on future Earth. 1 July 2013Last updated at 20:49 ET By Rebecca Morelle Science reporter, BBC World Service Microbes that can withstand tough conditions could be the last life on Earth The last surviving creatures on Earth will be tiny organisms living deep underground, according to scientists. 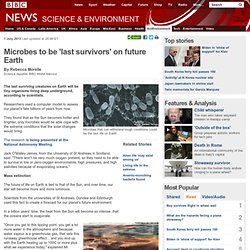 Researchers used a computer model to assess our planet's fate billions of years from now. They found that as the Sun becomes hotter and brighter, only microbes would be able cope with the extreme conditions that the solar changes would bring. The research is being presented at the National Astronomy Meeting. Every day the same dream - molleindustria. What human faces might look like in 100,000 years. Since we humans are prone to launching chemical weapons, unwittingly killing off the bee population or other factors that could lead to our extinction, it may be presumptuous to imagine what we'll look like in 100,000 years. 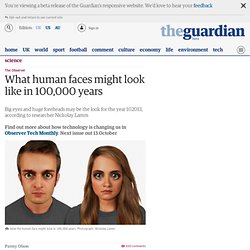 But designer and researcher Nickolay Lamm has speculated anyway, concluding with some rather startling illustrations that suggest that we'll look a bit like the aliens in Close Encounters of the Third Kind: large, bug eyes, huge foreheads and pigmented skin. It's conjecture, but also more than armchair futurism. Lamm based his illustrations on discussions with Dr Alan Kwan, an expert in computational genomics from Washington University who drew up a research paper to guide Lamm's artwork. Changes in the air and light around us will lead to adjustments in our facial structure, but we'll also be able to change what facial features we're born with, based on what's genetically trendy at the time. Parmy Olson is a technology writer for Forbes magazine in San Francisco.

The Google Glass feature no one is talking about — Creative Good. (Also: en français, en español, 简体中文, 繁體中文, На русском, in het nederlands, em Português) Google Glass might change your life, but not in the way you think. 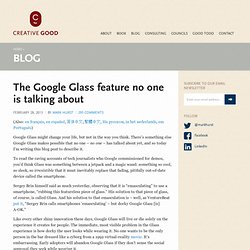 There’s something else Google Glass makes possible that no one – no one – has talked about yet, and so today I’m writing this blog post to describe it. To read the raving accounts of tech journalists who Google commissioned for demos, you’d think Glass was something between a jetpack and a magic wand: something so cool, so sleek, so irresistible that it must inevitably replace that fading, pitifully out-of-date device called the smartphone. Sergey Brin himself said as much yesterday, observing that it is “emasculating” to use a smartphone, “rubbing this featureless piece of glass.” Is Google Making Us Stupid? - Nicholas Carr. Illustration by Guy Billout "Dave, stop. 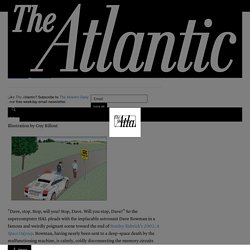 Stop, will you? Stop, Dave. Will you stop, Dave?” So the supercomputer HAL pleads with the implacable astronaut Dave Bowman in a famous and weirdly poignant scene toward the end of Stanley Kubrick’s 2001: A Space Odyssey. SXSW 2013: This revolution is brought to you by... - Ideas@Innovations. Attendees arrive at the South By Southwest Conference in Austin, Texas, U.S., on Sunday, March 10, 2013. 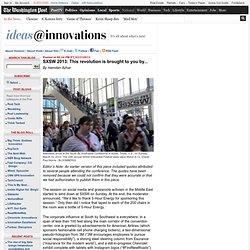 The 20th annual SXSW Interactive Festival takes place March 8-12. (David Paul Morris - BLOOMBERG) Editor’s Note: An earlier version of this piece included quotes attributed to several people attending the conference. The quotes have been removed because we could not confirm that they were accurate or that we had authorization to publish them in this piece. The session on social media and grassroots activism in the Middle East started to wind down at SXSW on Sunday. Paradise regained? They live in the most biodiverse country on earth and Brazilians’ attitudes to their natural resources have changed dramatically. Sustainability, not exploitation, is now the key for a nation that is aiming to become the world’s largest food producer. A 'Circular Economy': Why the Next Packaging Will Be Grown, Not Manufactured. 21 Things That Will Be Obsolete by 2020. Do You Really Want to Live Forever?

Imagine you are offered a trustworthy opportunity for immortality in which your mind (perhaps also your body) will persist eternally. Let’s further stipulate that the offer includes perpetual youthful health and the ability to upgrade to any cognitive and physical technologies that become available in the future. Zeitgeist 2012 – Google. 2012 was a year of big moments, from global games to historical elections and everything in between. Future Classics: Readers of 1936 Predict Which Authors Will Endure. France in the year 2000 as imagined in 1900. In this section of the site we bring you curated collections of images, books, audio and film, shining a light on curiosities and wonders from a wide range of online archives.

With a leaning toward the surprising, the strange, and the beautiful, we hope to provide an ever-growing cabinet of curiosities for the digital age, a kind of hyperlinked Wunderkammer – an archive of materials which truly celebrates the breadth and variety of our shared cultural commons and the minds that have made it. Some of our most popular posts include visions of the future from late 19th century France, a dictionary of Victorian slang and a film showing the very talented “hand-farting” farmer of Michigan. With each post including links back to the original source we encourage you to explore these wonderful online sources for yourself. THE FUTURE. The Usborne Book of the Future. Thinking About Futurism. Seeing the Future in Science Fiction. Some of my earliest memories are of science fiction. July-August 2013 (Vol. 47, No. 4) Eight Respected intellectuals describe their ultimate utopias, and sound like humiliating caricatures of themselves. ELI5: Why did society's view of 'The Future' change from being classically futuristic to being post-apocalyptic? : explainlikeimfive.

The Elusive Big Idea. Maria Popova: why we need an antidote to the culture of Google. You describe yourself as a "curator of interestingness" and run a website from New York called Brain Pickings, which covers all things curious and inspiring – books, art, science, photographs etc. Hipsters and Low-Tech. Why my child will be your child's boss. "The Menace of Mechanical Music" J P Sousa, 1906.

In 20 Years, We’re All Going To Realize This Apple Ad Is Nuts. Suzanne Collins’s “The Hunger Games,” review. Technology Is Changing How Students Learn, Teachers Say. The researchers note that their findings represent the subjective views of teachers and should not be seen as definitive proof that widespread use of computers, phones and video games affects students’ capability to focus. Are Smart Gadgets Making Us Dumb? The New Industrial Revolution - The Chronicle Review. By Jeffrey R. Young Chicago. Vanishing Languages. Human Intelligence: The Flynn Effect. It’s a Smart, Smart, Smart World.

How Computerized Tutors Are Learning to Teach Humans. The Computer Delusion by Todd Oppenheimer. The Singularity of Fools - By David Rieff. BEWARE THE ONLINE COLLECTIVE By Jaron Lanier. The Singularity Already Happened; We Got Corporations. Engelbart: Augmenting Human Intellect (1962) The Brain on Trial - Magazine. Dogs and Human Survival: Do the Eyes Have It? Not the End of the World Show. It’s the End of the World as We Know It . . . and He Feels Fine. Wired 8.04: Why the future doesn't need us. Science & Environment - Cities: How crowded life is changing us. Fed Government collecting big data. Opinion: The Internet is a surveillance state.

If you live in a surveillance state for long enough, you create a censor in your head. Area Man Outraged His Private Information Being Collected By Someone Other Than Advertisers. Big Data Enables Companies and Researchers to Look into the Future. How Companies Learn Your Secrets. Better Than Human. 5 Reasons The Future Will Be Ruled By B.S. MACH, the Computer Social Coach.

Related:  Nanotechnology - Foresight Institute   -  Every day the same dream - molleindustria   -  Is Google Making Us Stupid? - Nicholas Carr   -  21 Things That Will Be Obsolete by 2020   -  How Companies Learn Your Secrets   -  Education   -  Enterprise