Media and the Internet 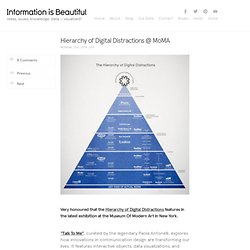 “Talk To Me”, curated by the legendary Paola Antonelli, explores how innovations in communication design are transforming our lives. It features interactive objects, data visualizations, and brain-blending guerilla tech projects. The Org Charts Of All The Major Tech Companies (Humor) Eli Pariser: Beware online "filter bubbles". I Point To TED Talks and I Point to Kim Kardashian. That Is All. The Demise of Guys: Why Boys Are Struggling and What We Can Do About It, by Philip Zimbardo and Nikita Duncan. 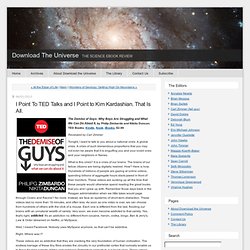 TED Books. Kindle, Nook, iBooks, $2.99. SuperBetter. A Brief History of Open Data. Data is currently in the spotlight, be it open data or big data. 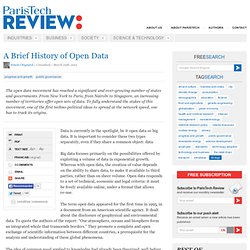 It is important to consider these two types separately, even if they share a common object: data. Big data focuses primarily on the possibilities offered by exploiting a volume of data in exponential growth. IBM identifies four 'digital personalities' to help segment media audiences. IBM has identified four new types of digital consumers that media providers should target to improve digital revenue streams. 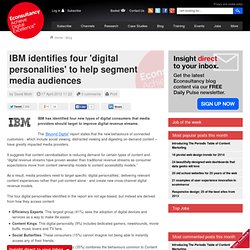 The four digital personalities identified in the report are not age-based, but instead are derived from how they access content: TNS identifies five 'eating plans' for more effective ad campaigns. Marketers should tailor ad campaigns based on the way different segments of the population consume information, according to TNS UK. 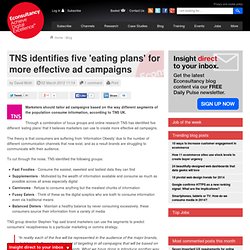 Through a combination of focus groups and online research TNS has identified five different ‘eating plans’ that it believes marketers can use to create more effective ad campaigns. The theory is that consumers are suffering from ‘Information Obesity’ due to the number of different communication channels that now exist, and as a result brands are struggling to communicate with their audience. To cut through the noise, TNS identified the following groups: TNS group director Stephen Yap said brand marketers can use the segments to predict consumers’ receptiveness to a particular marketing or comms strategy.

Center for Digital Strategies. The Web Credibility Project - Stanford University. Hypothes.is. Persuasive Tech. How to Manufacture Desire: An Intro to the Desire Engine. Type the name of almost any successful consumer web company into your search bar and add the word “addict” after it. 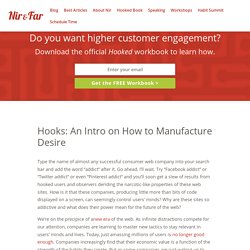 42 New Digital Media Resources You May Have Missed. No doubt your summer celebrations this weekend will leave you little time to catch up on reading. 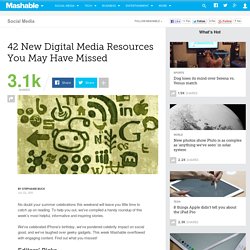 Checkthis. The Listserve. We Feel Fine / by Jonathan Harris and Sep Kamvar. Offline: hard to binge. The hyperlink architecture of the internet allows for an only-in-the-21st-century kind of binge.

Charts Characters Unicode etc. Get Internet Access When Your Government Shuts It Down. These days, no popular movement goes without an Internet presence of some kind, whether it's organizing on Facebook or spreading the word through Twitter. 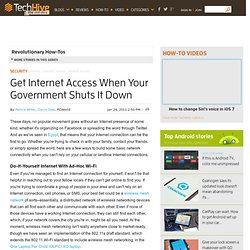 And as we've seen in Egypt, that means that your Internet connection can be the first to go. Whether you're trying to check in with your family, contact your friends, or simply spread the word, here are a few ways to build some basic network connectivity when you can't rely on your cellular or landline Internet connections. Do-It-Yourself Internet With Ad-Hoc Wi-Fi. Semantic web. Secret-Internet. QUAKER-ROOTS-L Archives. Hidden web resources. Invisible. 100+ Sites to Download All Sorts of Things.

These days you can find all sorts of things online, from audio books to flash files, from sound effects to CSS templates. 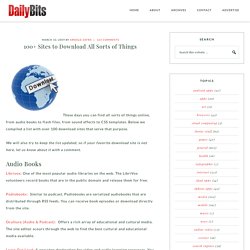 Below we compiled a list with over 100 download sites that serve that purpose. How Anonymous Picks Targets, Launches Attacks, and Takes Powerful Organizations Down. Image Design: Giles Revell No one but Hector Xavier Monsegur can know why or when he became Sabu, joining the strange and chaotic Internet collective known as Anonymous. But we know the moment he gave Sabu up. On June 7, 2011, federal agents came to his apartment on New York’s Lower East Side and threatened the 28-year-old with an array of charges that could add up to 124 years in prison. So Hector Monsegur, who as Sabu had become a mentor and icon to fellow members of Anonymous, surrendered his online identity to a new, equally faceless and secretive master: the FBI. For the next eight months, Sabu continued to rage across the Internet as a core member of AntiSec, a blackhat hacking group within Anonymous.

Anonymous 101: Introduction to the Lulz. (Editor’s Note: Any decent coverage of Anonymous is going to verge on some NSFW material at points. There will be questionable language and strange imagery.) Last week the net and the media were ablaze with the news that Anonymous might be taking on the Zeta drug cartel in Mexico, a story that has morphed into a wider drug corruption story, and led to one American law enforcement official in North Carolina being named as a gang conspirator. Anonymous. Addictomatic: Inhale the Web. Technocultures: The Digital Boarderlands (Part 2) Canver. The problem with nerd politics. In the aftermath of the Sopa fight, as top Eurocrats are declaring the imminent demise of Acta, as the Trans-Pacific Partnership begins to founder, as the German Pirate party takes seats in a third German regional election, it's worth taking stock of "nerd politics" and see where we've been and where we're headed.

Since the earliest days of the information wars, people who care about freedom and technology have struggled with two ideological traps: nerd determinism and nerd fatalism. Both are dangerously attractive to people who love technology. In "nerd determinism," technologists dismiss dangerous and stupid political, legal and regulatory proposals on the grounds that they are technologically infeasible. Geeks who care about privacy dismiss broad wiretapping laws, easy lawful interception standards, and other networked surveillance on the grounds that they themselves can evade this surveillance. Yes, Randi Zuckerberg, Please Lecture Us About `Human Decency' Interwebs drama of the day: Randi Zuckerberg, sister of Mark Zuckerberg, threw a fit when someone tweeted a copy of a Zuckerberg family photo (see above) that Randi herself had posted to Facebook, the confusing-to-use social Web site created by her strange, reclusive brother.

Randi was furious because she wanted the photo to be seen only by her friends, but someone who is friends with Randi's sister saw the photo on Facebook, assumed it was public, and spread it on Twitter. Behavior online. Follow us. Curation. Media Theory. Fake Social Media Hall of Fame by Erica Freidman. The Fake Social Media Hall of Fame. You'd Have To Be A Twit To Confuse Public And Private. Broken on Purpose: Why Getting It Wrong Pays More Than Getting It Right. Many of us managing Facebook fan pages have noticed something strange over the last year: how our reach has gotten increasingly ineffective.

How the messages we post seem to get fewer clicks, how each message is seen by only a fraction of our total “fans.” It’s no conspiracy. Facebook acknowledged it as recently as last week: messages now reach, on average, just 15 percent of an account’s fans. Rebirth Of The Eagle Hoax. How the Harlem Shake went from viral sideshow to global phenomenon. The Harlem Shake is a nearly perfect internet meme because it almost perfectly erases its origins. Oxford's University's Harlem shake librarian must be reinstated. Any Two Pages on the Web Are Connected By 19 Clicks or Less. How memes are killing the Internet (and our collective soul) By BEN BRANSTETTER On the day sequestration was prompted to cut $85 billion from the budget of the federal government—slashing funds for unemployment assistance, inspections from OSHA and the FDA, and major defense programs—President Obama used the phrase “Jedi mind meld.”

F-Shaped Pattern For Reading Web Content. Maria Popova: why we need an antidote to the culture of Google. Is Google Making Us Stupid? - Nicholas Carr. Audioboo. Free Screenwriting Software by Plotbot—write screenplays online with friends.

Silk - a brand new way to create and consume content.

Eternal September. Haterade. 11 Sexy Girls with Star Wars tattoos you don't have the rights to publish. Laurie Penny: A woman's opinion is the mini-skirt of the internet - Commentators - Voices. Where Looks Don’t Matter and Only the Best Writers Get Laid. Museums and artists take a stand against the dominance of social media. Green Blackboards (And Other Anomalies) Researcher reveals how “Computer Geeks” replaced “Computer Girls” The Online Disinhibition Effect (Suler, 2004) 1% rule (Internet culture) BBS - The rules of the internet. The Floppy Disk means Save, and 14 other old people Icons that don't make sense anymore.