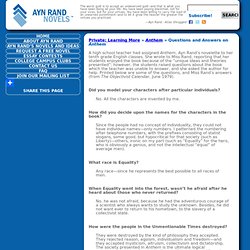 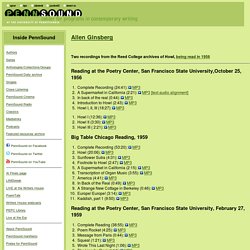 Allen Ginsberg's "Beat Literary History Course" Books I Will/Do Teach. GoogHangout w Sherman Alexie. A Look at the New York Novel ‘The Goldfinch’ by Donna Tartt. Rhizome (philosophy) "As a model for culture, the rhizome resists the organizational structure of the root-tree system which charts causality along chronological lines and looks for the original source of 'things' and looks towards the pinnacle or conclusion of those 'things.' A rhizome, on the other hand, is characterized by 'ceaselessly established connections between semiotic chains, organizations of power, and circumstances relative to the arts, sciences, and social struggles.' Rather than narrativize history and culture, the rhizome presents history and culture as a map or wide array of attractions and influences with no specific origin or genesis, for a 'rhizome has no beginning or end; it is always in the middle, between things, interbeing, intermezzo.' The planar movement of the rhizome resists chronology and organization, instead favoring a nomadic system of growth and propagation. 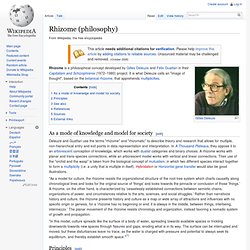 Louis Menand: Paul de Man’s Hidden Past. The idea that there is literature, and then there is something that professors do with literature called “theory,” is a little strange. 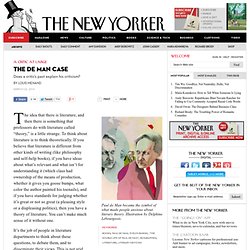 To think about literature is to think theoretically. If you believe that literature is different from other kinds of writing (like philosophy and self-help books), if you have ideas about what’s relevant and what isn’t for understanding it (which class had ownership of the means of production, whether it gives you goose bumps, what color the author painted his toenails), and if you have standards for judging whether it’s great or not so great (a pleasing style or a displeasing politics), then you have a theory of literature. You can’t make much sense of it without one. It’s the job of people in literature departments to think about these questions, to debate them, and to disseminate their views. The postmodern novel & beyond. The postmodern novel & beyond. Syllabus (1.14.13) This course assumes no prior knowledge of postmodernism, literary theory, or contemporary fiction, and it values “appreciation” and gut-level response along with critical interpretation. 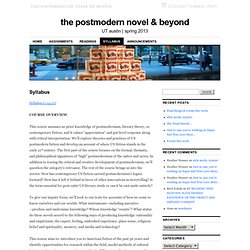 We’ll explore theories and practices of US postmodern fiction and develop an account of where US fiction stands in the early 21st century. The first part of the course focuses on the formal, thematic, and philosophical signatures of “high” postmodernism of the 1960s and 1970s. 61 essential postmodern reads: an annotated list. The thing about postmodernism is it's impossible to pin down exactly what might make a book postmodern. 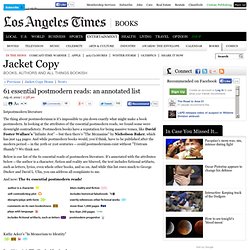 In looking at the attributes of the essential postmodern reads, we found some were downright contradictory. Postmodern books have a reputation for being massive tomes, like David Foster Wallace's "Infinite Jest" -- but then there's "The Mezzanine" by Nicholson Baker, which has just 144 pages. And while postmodern books would, you'd think, have to be published after the modern period -- in the 20th or 21st centuries -- could postmodernism exist without "Tristram Shandy"? We think not. Below is our list of the 61 essential reads of postmodern literature. Huffenglish - American Postmodernism Literature Page. Contemporary Literature: British Novels Now. Salman Rushdie, Ian McEwan, and Martin Amis Recall Surviving the Satanic Verses Fatwa. On a roll, Rushdie started a giant-size novel about India, Islam, and London. 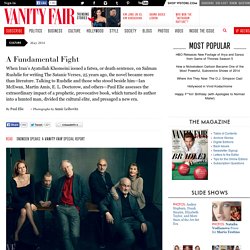 “I didn’t know if it was one book or three,” he has said. “I must have been feeling very confident. I’d had these two very successful books, and that put a lot of fuel in my tank, and I thought I could do anything.” He spent the next five years writing The Satanic Verses, applying the magic-realist touch to headline news: terrorist airline hijackings, pilgrimages to Mecca, rough-and-tumble immigrant London, and Thatcher-era British unrest. 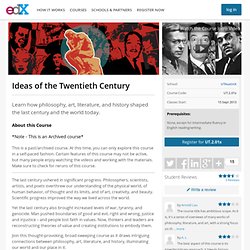 At this time, you can only explore this course in a self-paced fashion. Certain features of this course may not be active, but many people enjoy watching the videos and working with the materials. Make sure to check for reruns of this course. The last century ushered in significant progress. Eng181: British & Irish Modernisms. English 181, Summer 2012, Emory University British and Irish Modernisms Instructor: Amy E. 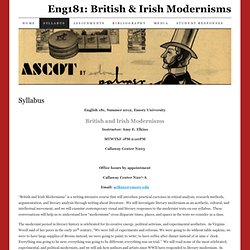 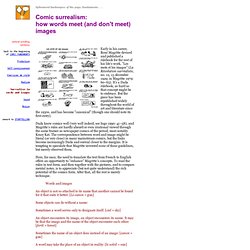 It's a Dada rulebook, as hard as that concept might be to embrace. But the piece has been republished widely throughout the world of art and literature since the 1930s, and has become "canonical" (though one should note its first entry). Dada knew comics well (very well indeed; see Inge 1990: 41–58), and Magritte's rules are hardly absurd or even irrational viewed through the same frames as newspaper comics of the period, most notably Krazy Kat. The correspondence between word and image might be literal (or very close) in many mainstream comics, but the links become increasingly Dada and surreal closer to the margins.

It is tempting to speculate that Magritte invented none of these guidelines, but merely observed them. Alan Moore: 'Why shouldn't you have a bit of fun while dealing with the deepest issues of the mind?' There is a certain degree of swagger, a sudden interruption of panache, as Alan Moore enters the rather sterile Waterstones office where he has agreed to speak to me. The jut of beard, the ringed fingers, the walking stick one feels he could use as a wand or a cudgel at any moment: he looks like Hagrid's wayward brother or Gandalf's louche cousin. He has a laugh that might topple buildings, though I doubt the man who reinvented the superhero comic would want such powers. He is here to promote Fashion Beast, a project that is unusual even in terms of a career that has been exceptionally idiosyncratic. Introduction to Theory of Literature. S Comprehensive Guide to Modern Literary Movements. Postmodernism FAQ. From Mark Twain to Ray Bradbury, Iconic Writers on Truth vs. Fiction.

Do It: 20 Years of Famous Artists’ Irreverent Instructions for Art Anyone Can Make. By Maria Popova “Art is something that you encounter and you know it’s in a different kind of space from the rest of your life, but is directly connected to it.” One afternoon in 1993, legendary art critic, curator, and interviewer extraordinaire Hans Ulrich Obrist — mind of great wisdom on matters as diverse as the relationship between patterns and chance and the trouble with “curation” itself — sat down in Paris’s Café Select with fellow co-conspirers Christian Boltanski and Bertrand Lavier, and the do it project was born: A series of instructional procedures by some of the greatest figures in contemporary art, designed for anyone to follow as a sort of DIY toolkit for creating boundary-expanding art.

Who am I? - Postmodernism and the question of Identity. Do you really know who you are? Can anyone? One of the most fascinating stories in contemporary cultural history is how the social conditions of the modern (and postmodern) world and postmodern philosophy have conspired to destabilize our sense of self. Do we as Christians have a solution? Paths of the Parkway: On Borges and New Jersey — CASE MAGAZINE. By Michael J. Harrington During spells of creative paralysis, Don DeLillo would resort to practices of procrastination familiar to most writers—walk around, gaze outside windows, look up random words in the dictionary.