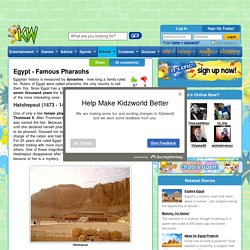 Rulers of Egypt were called pharaohs, the only country to call them this. Since Egypt has a history that goes back more than seven thousand years the list of pharaohs is long. Here are a few of the more interesting ones: Hatshepsut (1473 - 1458 BC) One of only a few female pharaohs, Hatshepsut who was the first wife Thutmose II. Hatshepsut Thutmose III (1479 - 1425 BC) Thutmose III might be responsible for the mysterious disappearance of Hatshepsut, but he was still a great ruler. Tutankhamen (1336 - 1327 BC) At the age of nine Tutankhamen (Tutankhamun) became pharaoh. Ramesses II (1279 - 1213 BC) Ramesses II was one of the longest ruling pharaohs of ancient Egypt.

Related Stories: Ancient Egypt for Kids. Horrible Histories The Pharoh Report. Pharaoh Prepares For Death (Horrible Histories) Chapter%209%20-%20Daily%20Life%20in%20Ancient%20Egypt%20FULL%20TEXT%20with%20Pictures. Hierarchy Pyramid of Ancient Egypt. Like the other ancient countries, ancient Egypt also possessed a social hierarchy in which people in the society were divided among various classes depending upon their occupation. 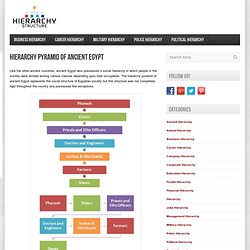 The hierarchy pyramid of ancient Egypt represents the social structure of Egyptian society but this structure was not completely rigid throughout the country and possessed few exceptions. Hierarchy Pyramid of Ancient Egypt Pharaoh The topmost level in the Egyptian hierarchy was acquired by the King, who was also known as Pharaoh. The Pharaoh was the name given to the rulers of ancient Egyptian dynasties. Viziers The vizier’s were the second highest personnel in the ancient Egypt who were responsible for serving the pharaoh as their most trusted people. Priests and Elite Officers The priests were considered quite significant in the Egyptian society and the role played by them was considered as quite vital.

Doctors and Engineers The next level in the hierarchy pyramid of ancient egypt is of Doctors and Engineers. Ancient Egypt - The Egyptian Timeline. Show me -ancient civilisations, fun, games, homework help, things to do and places to go from UK museums and galleries. Ancient Egypt. KS2 Ancient Egypt and Egyptians: teaching ideas and resources. The Escape From The Mummy's Tomb game from National Museums Liverpool is just one of the many amazing free resources available from the UK's museums. 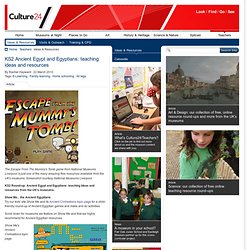 National Museums ScotlandDiscover people of the past – Egyptians! The British MuseumThe British Museum's website is another useful destination for Ancient Egyptian resources, including their Online Tours. The Egyptians. Ancient Egyptians History TopicBox. For all thing Egyptian to Sphinx and pyramids, including archaeological finds from Tutankhamen's to scarab beetles necklaces. 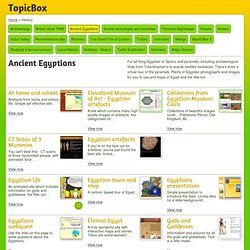 There's even a virtual tour of the pyramids. Plenty of Egyptian photographs and images for you to use and maps of Egypt and the Nile too. At home and school Artefacts from home and school life. Simple yet effective site… View now Cleveland Museum of Art - Egyptian artefacts A site which contains many high quality images of artefacts. View now Collections from Egyptian Museum Cairo Collections of beautiful images cover....Prehistoric Period, Old Kingdom, Mi… View now CT Scans of 3 Mummies You can't beat this - CT scans of three mummified people, with animated 'slice'…