Students at Carver School of Technology in Atlanta participated in what’s described as a five-round fight with punches being thrown by about 20 students at one point. 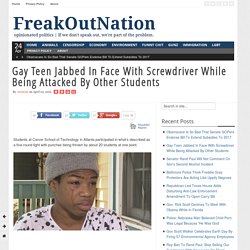 Two gay teens were targeted while the principal reportedly did nothing, CBS 46 reports: Tim Jefferson, 16, said it all started as he and a friend left their last class to go home. Lgbtiamish : The Mildred Loving quote that... Historic ruling: Judge orders anti-gay Scott Lively to stand trial for crimes against humanity. For the first time, a federal US judge has ruled a persecution of LGBT people is a crime against humanity. 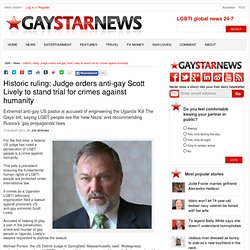 This sets a precedent ensuring the fundamental human rights of LGBTI people are protected under international law. It comes as a Ugandan LGBTI advocacy organization filed a lawsuit against prominent US anti-gay extremist Scott Lively. Accused of helping to play a part in the persecution, arrest and murder of gay people in Uganda, Lively’s lawyers requested to dismiss the lawsuit. Michael Ponsor, the US District Judge in Springfield, Massachusetts, said: ‘Widespread, systematic persecution of LGBTI people constitutes a crime against humanity that unquestionably violates international norms.’

‘The history and current existence of discrimination against LGBTI people is precisely what qualifies them as a distinct targeted group eligible for protection under international law. Black Or White: There's a fine line between sexual preference and racial discrimination. I know this is a taboo topic, but I think it’s something that has to be said: gays can have a pretty twisted attitude when it comes to race. 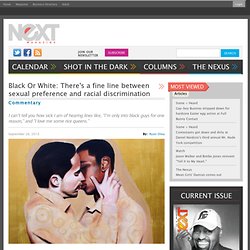 As people are increasingly able to hide behind online personas and digital devices, I’m seeing it more and more. I have friends of color who have gotten to the point where their online experiences have been so negative that they feel completely alienated from white people in real life. Some won’t even bother trying to approach a group of white gays in a bar because of it. DoucheBagsofGrindr.com is proof enough that we have a problem. A large portion of the online lingo that we see on a daily basis is blatantly racist. Battling Asexual Discrimination, Sexual Violence And 'Corrective' Rape.

This is the fourth part of a six-part series on asexuality, in which we explore the history of the asexual movement, uncover current research on asexuality, debunk common misconceptions and discuss the challenges the asexual community faces. 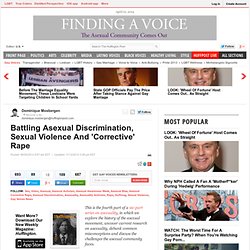 When Julie Decker was 19, a male friend tried to "fix" her by sexually assaulting her. "It had been a good night," said Decker, now 35 and a prominent asexual activist and blogger. “I had spoken extensively about my asexuality, and I thought he was listening to me, but I later realized that he had just been letting me talk. " As she said goodbye to him that night, the man tried to kiss her. When she rejected his advance, he started to lick her face “like a dog," she said. Homophobia and Hip-Hop - An Interview Breaks a Barrier. So there he was on the air the following morning, getting a loving and concerned third degree from Ebro Darden, the program director for Hot 97 (WQHT 97.1 FM), the station where Mister Cee, 47, has worked for two decades. 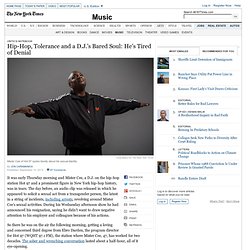 The sober and wrenching conversation lasted about a half-hour, all of it eye-opening. In its detail and bluntness the talk became not just a discussion about one man’s personal struggles but also an intense and public conversation about hip-hop and sexuality. “I am tired of trying to do something or be something that I’m not,” Mister Cee said. 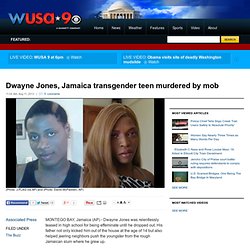 His father not only kicked him out of the house at the age of 14 but also helped jeering neighbors push the youngster from the rough Jamaican slum where he grew up. By age 16, the teenager was dead - beaten, stabbed, shot and run over by a car when he showed up at a street party dressed as a woman. His mistake: confiding to a friend that he was attending a "straight" party as a girl for the first time in his life. "When I saw Dwayne's body, I started shaking and crying," said Khloe, one of three transgendered friends who shared a derelict house with the teenager in the hills above the north coast city of Montego Bay. Like most transgenders and gays in Jamaica, Khloe wouldn't give a full name out of fear. Study: Gay teachers are less likely to challenge homophobic bullying. A new US study has shown that gay teachers are less likely to challenge homophobia in schools for fear of drawing attention to their sexuality and putting their careers at risk. 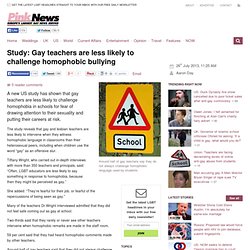 The study reveals that gay and lesbian teachers are less likely to intervene when they witness homophobic language in classrooms than their heterosexual peers, including when children use the word “gay” as an offensive slur. Tiffany Wright, who carried out in-depth interviews with more than 350 teachers and principals, said: “Often, LGBT educators are less likely to say something in response to homophobia, because then they might be perceived as gay.” She added: “They’re fearful for their job, or fearful of the repercussions of being seen as gay.”

Everything You Always Wanted To Know About Transgender People But Were Afraid To Ask. How does the transgender process shake-up sociological approaches to gender? The Global Divide on Homosexuality. Greater Acceptance in More Secular and Affluent Countries Overview As the United States and other countries grapple with the issue of same-sex marriage, a new Pew Research Center survey finds huge variance by region on the broader question of whether homosexuality should be accepted or rejected by society.

The survey of publics in 39 countries finds broad acceptance of homosexuality in North America, the European Union, and much of Latin America, but equally widespread rejection in predominantly Muslim nations and in Africa, as well as in parts of Asia and in Russia. Opinion about the acceptability of homosexuality is divided in Israel, Poland and Bolivia. Attitudes about homosexuality have been fairly stable in recent years, except in South Korea, the United States and Canada, where the percentage saying homosexuality should be accepted by society has grown by at least ten percentage points since 2007. 10 Questions You Shouldn't Ever Ask A Gay Guy.