I am working with Troll.is. We provide knowledgeable and adventurous experts and all the safety equipment and gear you need. Website: 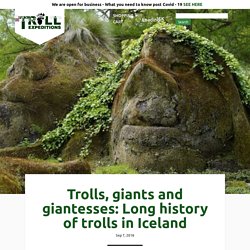 Edited by Alondra Silva Munoz. Trolls, giants and giantesses are essential characters in the Icelandic folklore. Their history is just as old as the history of Iceland itself. In this article you’ll learn everything you need to know about these mythical creatures that have accompanied Icelanders through decades and that inspired our name. The words tröll or troll and tröllkona or female troll are quite extensive because they refer to all beings which are bigger than humans in some ways and that are malicious to some degree, so even those that are ghosts and wizards. These names are so prominent that the proper names of trolls seldomly appear. In the Icelandic stories that still exist about trolls, these beings are described just as told in the Nordic myths. Even though trolls are in many ways dangerously deformed, they always take shape of humans in all basic ways, because it appears so that they are an older race than the humans.

Lose Yourself in the Misty Spray of Skogafoss Waterfall - Tröll Expeditions. Have you ever had the opportunity to stand next to an awe-inspiring waterfall? 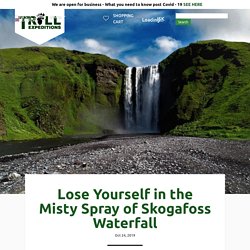 If yes… then perhaps mere words are not enough to describe the magical, refreshing and rejuvenating experience that you might have had. So, if you too are looking to experience the sheer power of cascading water, then Iceland should be your next holiday destination. This land of waterfalls houses many distinct waterfalls, each one of which is unique in itself. Written by Jaya, edited by Andrea Gylfadóttir. One such stunning waterfall, which you must include in your itinerary, is the iconic Skogafoss waterfall. The single or multiple rainbows that are formed when the misty spray catches the sun’s rays, not only adding to the mystical allure, but also offer avid photographers a perfect capture. However, to witness the actual grandeur of this majestic waterfall, it’s recommended that you take the steep steps that reach the top of the waterfall.

How to reach Skógafoss? Other things to do near Skogafoss. Trölls Take The Town: Culture Night & Reykjavík Marathon. Written by Rex Beckett. 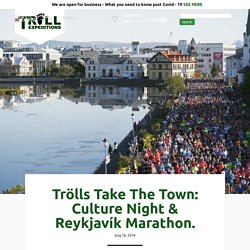 Marking the launch of the city’s cultural year which kicks off the official programming of theatres, museums and major cultural institutions of Reykjavík, the event is comprises many smaller events that are all created and run by the city’s residents, with support and allocation from the city. Adventure and Culture can go together. High Winds in the South on Nov 28th & 29th - Tröll Expeditions. Exploring the South Coast and Taking a Glacier Walk as a Local. Written by Þór. 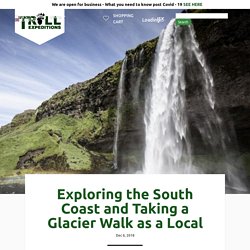 Edited by Alondra Silva Munoz. Hi! My name is Þór and I’m an Icelander who had never stepped on a glacier. So, yep, I’ll tell you my experience with the Trolls while exploring the South coast of Iceland and taking a glacier tour on Sólheimajökull. Keep on reading to get a first hand account of his adventures with Troll Expeditions.

After looking on all the offers from different tour operators in Iceland I picked Troll Expeditions since they seemed both well organized, secure and experts in glacier hikes, which was my main interest. The driver picked me up in the morning near a gas station in the eastern part of the city near my home. Then we were on our way, our driver introduced himself with an Icelandic name which is hard to pronounce for foreigners, but then said we could call him Siggi, which is a lot easier to say. Seljalandsfoss waterfall Next up was Seljalandsfoss, I was very excited about that waterfall since you can walk behind it and it didn′t disappoint.