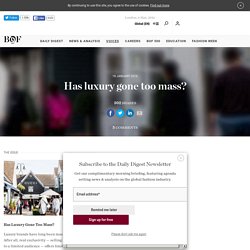 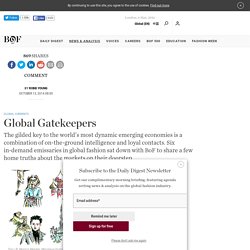 This gold-covered marble monolith stood as testament to the fact that all roads in the vast expanse of the Roman Empire converged on one single point. From Africa Vetus to the tribes of Germania, all roads really did lead to Rome. Stalin Shutdown Survivor’s Owner Brings Luxury to Masses. MOSCOW, Russia — On rainy days, the GUM mall on Moscow’s Red Square swarms with tourists. 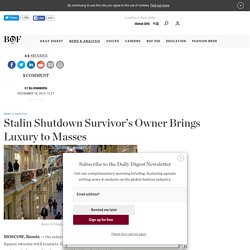 Unfortunately for GUM, the hordes seeking shelter tend to do more looking than buying, in large part because the big-brand fashions there cost about 50 percent more than they do in Paris or London. That’s a problem for GUM’s owner, a closely held Russian retailer called Bosco di Ciliegi. Without the reliable cash from tourists that fuels profits at department stores like Galeries Lafayette in Paris or London’s Harrods, Bosco has started to look beyond its flagship to new outlets across Russia, where it can win over local shoppers rather than visitors. 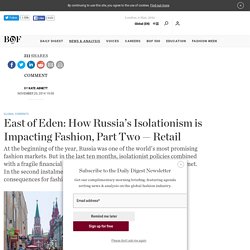 As with any denied pleasure, it becomes forbidden fruit. Following the collapse of the Soviet Union, Russia unleashed a desire for fashion that had been dormant for decades, suppressed by the USSR’s official distrust of commercialism, luxury and indulgence, and curbed by the regime’s restrictions on imported Western goods, including clothing. East of Eden: How Russia’s Isolationism is Impacting Fashion, Part One — Media. Russian President Vladimir Putin speaks at a press conference | Source: Shutterstock LONDON, United Kingdom — Last month, Russian president Vladimir Putin signed a law that will prohibit foreign individuals or companies from owning more than 20 percent of any Russian media company as of February 2017. 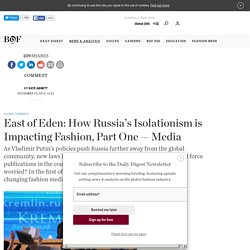 According to another piece of legislation announced this month, from December 6th of this year, foreign companies will have to seek government permission before buying a stake of 25 percent or more in newspapers and magazines in Russia. The new laws are a bullet fired squarely at the country’s independent news outlets, which include Forbes and Vedomosti, a business newspaper part-owned by the Financial Times Group and Dow Jones, whose corruption exposés and investigations of businesspersons close to Mr Putin have long been a thorn in the Kremlin’s side. But fashion media is in the firing line as well. How the magazines will react to the legislation remains to be seen. Russian Fashion Market’s Plunge Turns Heat on Global Brands. MOSCOW, Russia — Russia’s 2.25 trillion-ruble ($33 billion) fashion market is set to shrink at least 20 percent this year, adding to pressure that’s causing some global brands to quit the country, according to researcher Fashion Consulting Group. 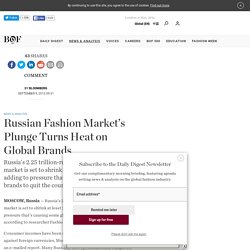 Consumer incomes have been sapped by the depreciation of the ruble against foreign currencies, Moscow-based Fashion Consulting said in an e-mailed report. Many Russians now spend half their budget on food, leaving less money for clothes, it said. Amid the slowdown, retailers including the U.K.’s New Look and River Island have quit Russia in the past year. Marks & Spencer Group Plc, Sweden’s Stockmann OYJ and Spain’s Mango have reduced the number of stores in the country, while brands such as Supergroup Plc’s Superdry are delaying opening plans.

“You probably won’t see many international brands launching now,” said Nick Hill, who runs the Russian franchise of U.K. department-store chain Debenhams Plc. For Young Russian Designers, Success May Depend on Street Style Stars. Following the steep decline of the ruble at the end of last year, one might think that young Russian designers would have entered a boom period, with their European competition suddenly priced out of the Russian market. 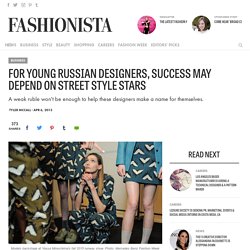 But a weak currency — the ruble has lost some 50 percent of its value to the dollar since oil prices fell and trade sanctions were imposed by Western countries late last year — hasn't been enough. While Russian consumers have certainly cut back on foreign luxury goods as a whole, homegrown labels haven't necessarily been given the home advantage. For one, luxury consumers are still buying foreign goods.

At Tsum, Russia's biggest luxury department store, brands like Dolce & Gabbana and Michael Kors are still among the best sellers. Some Italian labels — for which Mercedes-Benz Fashion Week director Alexander Shumsky alleges Russia represents 50 to 60 percent of business — have adjusted their prices downwards, taking a temporary hit in margins to retain business. Russian Consumers Reflect the Pinch of Economic Sanctions. Photo MOSCOW — The brand-new Avia Park is a glittering testament to the power of the Russian consumer. 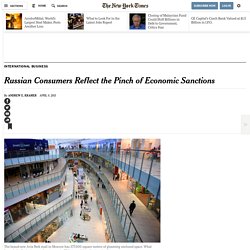 A panorama of white tile flooring, under a soaring, six story-tall glass roof, it is the largest mall in Europe, with 377,000 square meters of enclosed space, a 17-screen multiplex, even a 70-foot tall aquarium of tropical fish. There is just one problem: It is a ghost town. Row after row, storefronts are vacant. On a recent evening, a handful of visitors meandered past shops that have opened, but purchases are relatively rare. Amidst the Russian Crisis, a Shift to Domestic Brands? Russia’s Patriotic Fashion Agenda. 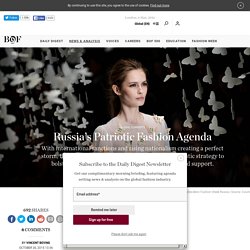 PETERSBURG, Russia — Russia is going through its most patriotic moment in a generation. On the heels of armed intervention in Syria, Vladimir Putin's approval rating recently rose to a record 90 percent. At the best restaurants in Moscow and St. Petersburg, chefs now brag that they are revisiting traditional Russian dishes, using 100 percent Russian ingredients. Then they quickly add that the latter have been made a lot more common due to international sanctions against the country. Intelligence, Market Pulse. The Rich Don't Drive the Luxury Sector. LONDON, United Kingdom — If luxury spending was indeed driven by the rich, the luxury industry would be a niche sector serving a fortunate few, rather than a dynamic, global business selling to a consumer market measured in millions. 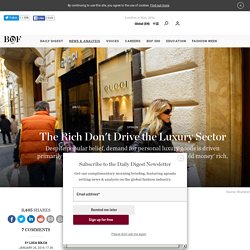 During the past 50 years, a wave of luxury goods consumption has swept across key geographies in the world, moving from Europe to the USA in the 1970s, then Japan in the 1980s, Russia in the 1990s and, in the last 15 years, spreading across Greater China. In each case, the underlying mechanism that has fueled demand for luxury goods has been the same: the emergence of newly created wealth. New ideas, liberalisation, free trade, higher liquidity and investment all bring new opportunities for economic growth. How better to define their new identity than by possessing things other people don’t have.

Oil Collapse Hits Fashion Markets. ASTANA, Kazakhstan — She doesn’t look like a woman who could get excited about crude oil. Aika Jaxybai has the gaze of an artist, the countenance of an aristocrat and the kind of poetic wardrobe that even her peers find intriguing. Chatting to fashion insiders like Jaxybai about the price of petroleum would seem strange in most places in the world, but here in Kazakhstan, where she lives, the state of the oil market makes just about everyone animated. That's because no business here is immune to the rise and fall of prices — especially now. “It’s obvious that people are not in a hurry to spend their money on fashion right now,” says Jaxybai, a Kazakhstani fashion designer and consultant to retailers of luxury imports.

What Recession? Wealthy Russians Snap Up Luxury Goods. MOSCOW, Russia — With the recession heading into its second year, most Russians are cutting back. Not Yaroslav Gafurov. The 25-year-old Muscovite said now is the perfect time to stock up on his favorite toys — luxury cars and expensive watches. Chanel Winning Fight Against Luxury Grey Market, Says Bruno Pavlovsky. HAVANA, Cuba — Chanel, the world's second largest luxury brand, said on Monday its efforts to curb the grey market have been successful and are helping boost revenue in China despite weaker overall demand for luxury goods.

The company narrowed its price gaps between the United States, Europe and Asia last year to prevent smugglers buying goods in one region to re-sell to another in the grey market. "We reduced quite a lot the parallel market, mainly in Asia, and we have double-digit growth in our boutiques in mainland China," Bruno Pavlovsky, Chanel's president of fashion, said in an interview in Havana. Chanel will unveil its latest cruise collection in Havana on Tuesday, in Cuba's first major fashion show since the 1959 revolution and another sign of warming relations between the Communist-ruled island and the West.

The United States and Cuba formally agreed to restore diplomatic relations last July. "There is a slowdown but not such a big slowdown," he said. Tue, 11 November 2014. Intelligence, Market Pulse. LONDON, United Kingdom — The Savigny Luxury Index (“SLI”) fell by 2.2 percent over the month, underperforming the MSCI World Index (“MSCI”) by almost three percentage points. Investors are concerned that the standoff between the West and Russia over its annexation of Crimea could result in a drop in valuable Russian tourist income for the luxury goods sector. Big news • The US and the European Union have agreed to prepare possible tougher economic sanctions and visa restrictions in response to Russia’s annexation of Crimea. Armani Seeks to Entice Fashionistas in 'Key Market' Russia.

MOSCOW, Russia — Renowned Italian designer Giorgio Armani sought to entice Moscow fashionistas with his latest creations on a visit to Russia amid weaker demand globally for luxury goods. In his first visit to Moscow since 2009, the 81-year old fashion veteran presented and signed copies of his autobiography as well as hosted a catwalk show of his men's and women's Autumn/Winter 2016/2017 collections. Russia Raises Minimum Monthly Wage to $110. Tolls For Foreign Trucks in Russia to Double.