Lingerie Insight is one-stop source for global news media based on lingerie industry & brands get UK lingerie business news of nightwear and swimwear community via magazine and website. Subscribe us now 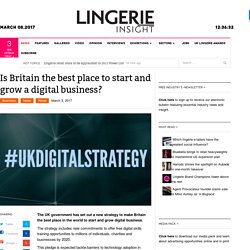 The strategy includes new commitments to offer free digital skills training opportunities to millions of individuals, charities and businesses by 2020. This pledge is expected tackle barriers to technology adoption in sectors such as retail. Story continues below Advertisement The government also plans to create five international ‘tech hubs’ in emerging markets to create and develop partnerships between UK companies and local tech firms. And it will send £17.3 million in funding to support the development of new robotics and artificial intelligence technologies in universities across the UK.

Italian lingerie brand Cosabella has recently benefited from implementing an artificial intelligence-enabled platform, growing its email revenue by 60%. “To uphold our position as a world-leading digital economy businesses and the Government need to work together. Agent Provocateur - Sports Direct Investment Vehicle Buys. Agent Provocateur has been sold to Sports Direct-backed firm Four Marketing, after going into administration. 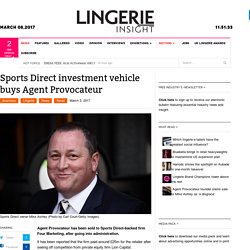 It has been reported that the firm paid around £25m for the retailer after seeing off competition from private equity firm Lion Capital. Mike Ashley’s Sports Direct holds a 25% stake in Four Marketing, which represents brands including Guess, 7 for All Mankind and Orla Kiely. Story continues below Advertisement The sale was conducted through what is known as a pre-pack administration, where a buyer has been lined up before it is officially put into administration. Photo by Carl Court/Getty Images. Agent Provocateur was sold by private equity firm 3i, which acquired the retailer in 2007.

House OF Fraser - Anchor New £300m Chester Retail Complex. House of Fraser has signed an agreement to open an anchor store at a major new retail complex in Chester. 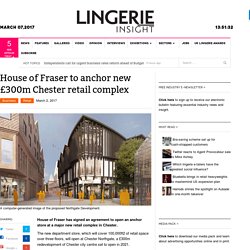 The new department store, which will cover 100,000ft2 of retail space over three floors, will open at Chester Northgate, a £300m redevelopment of Chester city centre set to open in 2021. Chester Northgate will be House of Fraser’s second major UK store opening, following Rushden Lakes, which opens this year, since its acquisition by Sanpower Group in late 2014. Story continues below Advertisement In recent years, House of Fraser has focused on further developing its multichannel proposition, alongside continued investment in its store portfolio and international expansion, celebrating the opening of the company’s first store in China, Nanjing in December 2016. Yawn - Nightwear Brand Secures Five New UK Stockists At Moda. British nightwear brand Yawn has signed on five UK stockists after a successful Moda show. 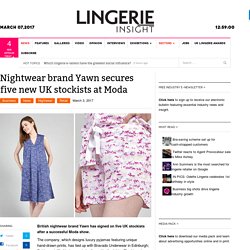 The company, which designs luxury pyjamas featuring unique hand-drawn prints, has tied up with Bravado Underwear in Edinburgh; Debby and Jilly Underwear in Ledbury, Hertfordshire; The Lingerie Room in Harrogate, North Yorkshire; and Feathers of Marlow in Marlow, Buckinghamshire. Belle Femme Lingerie of Kilkenny, Ireland, also picked up the brand at Moda Lingerie & Swimwear, which took place at NEC Birmingham on February 19-21. Lingerie Insight - Unveils 2017 Power List Website. Lingerie Insight is pleased to announce the launch of a new website to promote our first annual Power List, a guide to the 50 most important and influential individuals in the industry. 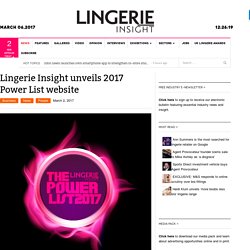 The microsite provides a complete overview of the 2017 Power List, a rundown of the five individual categories and information on unique sponsorship opportunities. The view the site CLICK HERE. Story continues below. Agent Provocateur - Slams Sale To Mike Ashley As A Disgrace. The founder of luxury lingerie retailer Agent Provocateur has slammed the sale of the retailer to a Sports Direct-backed firm, labelling it “a disgrace to British business”. 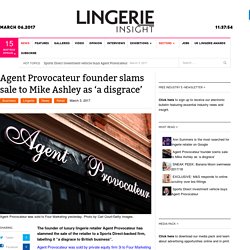 Agent Provocateur was sold by private equity firm 3i to Four Marketing on Thursday after going into administration. Sports Direct, whose owner is billionaire Mike Ashley, holds a 25% stake in Four Marketing, which represents brands including Guess, 7 for All Mankind and Orla Kiely. Story continues below. Regional Focus - South East England Lingerie Boutiques. We meet five independent lingerie retailers based in the South East of England to find out how business is faring and how the high streets in their local areas have changed over the years Loncherie Owner, Carolyn HardmanLocation: Farnham, Surrey. 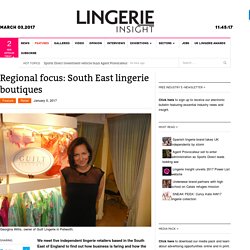 Helen Masters - Opinion How To Keep Your Employees Happy. With over a third (35%) of lingerie professionals admitting they are unhappy in their jobs in Lingerie Insight’s Job Satisfaction Survey last month, we question how employers can possibly keep morale up in the workplace. 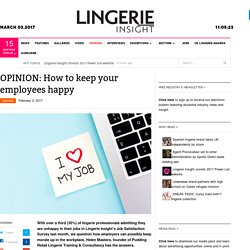 Helen Masters, founder of Pudding Retail Lingerie Training & Consultancy has the answers. Any manager or business owner worth their salt knows that the key to a successful business – whether it’s a retailer, manufacturer, designer or marketing consultancy – is good people. And the key to finding the best team to grow your business is recruiting staff with the right skill sets and attitude and, secondly, keeping those people engaged and productive. Lingerie And Swimwear Brand Naturana Celebrates 100 Years. Naturana will mark its 100th anniversary this year with special events both in Germany and the UK, but positive changes to the business in recent years have given the brand even more reasons to celebrate. 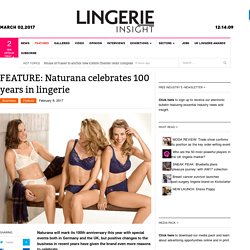 Acai Activewear - Emerging Brand The Story Behind It. Emerging brand Acai will return to Moda this month after witnessing an overwhelming response to its functional and fashionable activewear collection last season. 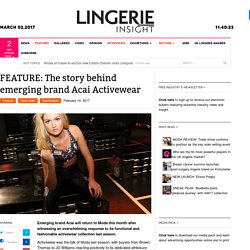 Activewear was the talk of Moda last season, with buyers from Brown Thomas to JD Williams reacting positively to its dedicated athleisure platform, which was launched to reflect the contemporary consumer demographic seeking apparel for active lifestyles and wellness. The Active area presented collections from new and established brands, which exceeded their sales expectations for the three-day trade show due to the overall consensus from retailers that athleisure has become a key focus of their business.

Story continues below. London Fashion Week - Presentation OF Lingerie Brands Dazzle. Luxury Retail - London Crowned The Capital Of The World. London has topped the global ranking for new luxury retail store openings in 2016. According to Savills’ Global Luxury Retail report, more luxury stores opened in London than in any other city last year – a total of 41 new openings – compared to Paris’ 36 and New York’s 31. London has consistently been the most visited city in the world by international tourists, says Savills, making it an important luxury retail market as approximately a third of this type of spend takes place abroad.

Story continues below Advertisement For European luxury brands, London is a useful stepping stone prior to expanding into the US, while for US brands it provides a gateway to Europe both geographically and in terms of brand profile. Looking ahead, forecasts by the World Tourism Organization (UNWTO) suggest international tourist arrivals globally will double to almost 1.8 billion by 2030, aided by further growth of low cost air travel and a rapidly expanding and mobile middle class from emerging economies. UKLA - Elissa Grainger To Host Lingerie Exhibition At DMU. Elissa Grainger, an emerging lingerie designer who was crowned Rising Star of the Year in the 2016 UK Lingerie Awards, will exhibit her portfolio of work in a new gallery space at De Montfort University (DMU). The Contour Fashion graduate will showcase her designs in The Gallery, a glass-fronted space located in the Vijay Patel building, the cutting-edge new home to the university’s art and design courses.

Open to the public this spring, the exhibition will feature Grainger’s trademark latex lace designs, including her final-year collection, which was showcased on the Contour Fashion catwalk in June 2015, and an innovative black and white range which won her the St. Andrews Young Designer Award 2016. Story continues below. Adidas - Unveils Swimwear Line Made of Recycled Ocean Plastic. Adidas has launched a new swimwear range made from recycled ocean plastic as part of its ongoing collaboration with ocean conservation group Parley. The SS17 collection is made from INFINITEX, a durable fabric that derives from plastic wastes, including debris and used fishing nets, which are processed into a recycled nylon yarn. The range includes men’s swim boxers and swim trunks and a one-piece swimsuit for women.