Battle of the Somme: How Britain learned the truth. Image copyright Chronicle/Alamy Digital media means news of a soldier's death can now be shared almost instantly. 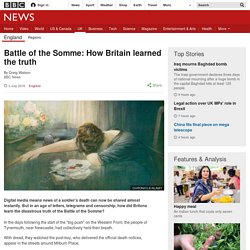 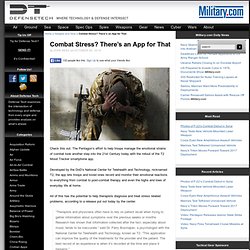 The Pentagon’s effort to help troops manage the emotional strains of combat took another step into the 21st Century today with the rollout of the T2 Mood Tracker smartphone app. Developed by the DoD’s National Center for Telehealth and Technology, nicknamed T2, the app lets troops and loved ones record and monitor their emotional reactions to everything from combat to post-combat therapy and even the highs and lows of everyday life at home. All of this has the potential to help therapists diagnose and treat stress related problems, according to a release put out today by the center.

“Therapists and physicians often have to rely on patient recall when trying to gather information about symptoms over the previous weeks or months. Research has shown that information collected after the fact, especially about mood, tends to be inaccurate.” said Dr. . – John Reed. Far far from Ypres: Soldiers' songs shine light on WW1 attitudes. 16 January 2014Last updated at 19:46 ET By Steven Brocklehurst BBC Scotland news website The songs of World War 1 often speak of disillusionment, bitterness, boredom and a very dark sense of humour, says Scottish folk singer and producer Ian McCalman. 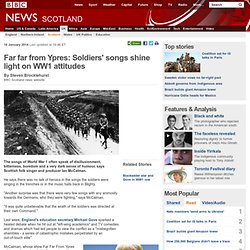 He says there was no talk of heroics in the songs the soldiers were singing in the trenches or in the music halls back in Blighty. "Another surprise was that there were very few songs with any animosity towards the Germans, who they were fighting," says McCalman. "It was quite unbelievable that the wrath of the soldiers was directed at their own Command. " Last week, England's education secretary Michael Gove sparked a heated debate when he hit out at "left-wing academics" and TV comedies and dramas which had led people to view the conflict as a "misbegotten shambles - a series of catastrophic mistakes perpetrated by an out-of-touch elite". 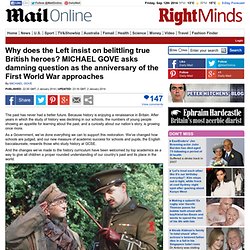 Because history is enjoying a renaissance in Britain. A War to End All Innocence. The War to End All Wars? Hardly. But It Did Change Them Forever. Teaching World War I With The New York Times. WW1 - Values from History - Inspire Aspire. Viewpoint: 10 big myths about World War One debunked. 25 February 2014Last updated at 15:45 GMT Much of what we think we know about the 1914-18 conflict is wrong, writes historian Dan Snow. 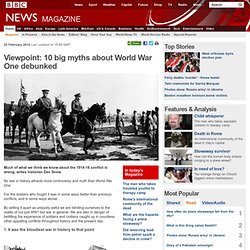 No war in history attracts more controversy and myth than World War One. For the soldiers who fought it was in some ways better than previous conflicts, and in some ways worse. By setting it apart as uniquely awful we are blinding ourselves to the reality of not just WW1 but war in general. We are also in danger of belittling the experience of soldiers and civilians caught up in countless other appalling conflicts throughout history and the present day. 1. Fifty years before WW1 broke out, southern China was torn apart by an even bloodier conflict.

History - World War One Centenary - WW1 1914-1918. A quest for truth: why I made Only Remembered. Tragedy: 10 million soldiers were killed world war one, this photograph shows one of the most well known mass war graves, Ypres in France. 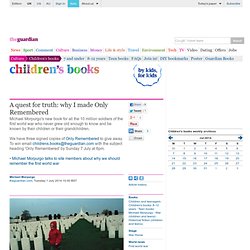 Michael Morpurgo: We are who we are now, in large part, because of the first world war. Michael Morpurgo came into the Guardian to do a podcast interview with two site members, Orli, aged 14 and JDBookGroup's Fernando aged 11. 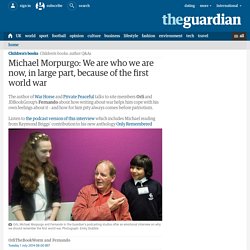 The resulting conversation was so beautiful and profound we decided to publish the whole transcript here! Fernando: What message do you want to give to children by basing so many of your books on the war? I don't want to give a message to children. What I want is to tell a story to children, and then I want the children to make of it what they would like to make of it. But, there's no doubt about it, I have a particular take on war, and that comes through in my stories. Michael Morpurgo: why we should remember the first world war – children's books podcast.

First world war centenary is a year to honour the dead but not to glorify. On the morning of 18 August 1918, units of the Belgian army climbed out of their trenches and advanced. 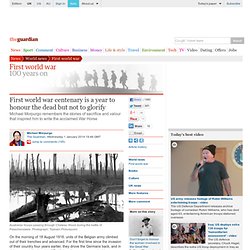 For the first time since the invasion of their country four years earlier, they drove the Germans back, and in doing so took the hamlet of De Kuiper. It was not recognisable any more as a place where anyone had ever lived, simply a desolate wasteland of mud and craters, but it was, nonetheless, Belgian land, their land. It was for Belgians a small but symbolic victory, a proud victory. Back home in Radlett, Hertfordshire, my grandfather, Emile Cammaerts, heard the glad news and rejoiced. Search in Centenary News. Search for the great war. Watch Oregon Art Beat Online. A personalized PBS video experience is only a few clicks away. 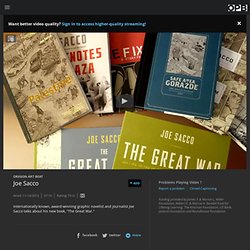 The Great War . Prologue. Recruitment and Conscription. Golden Days Festival. 1. From Homemind to Batttlemind - Forlaget Columbus. Joe Sacco’s “The Great War” - The New Yorker. Joe Sacco’s latest work, “The Great War,” a twenty-four-foot-long panorama that folds like an accordion, illustrates the first day of the Battle of the Somme, one of the bloodiest battles in history, which took place on July 1, 1916. 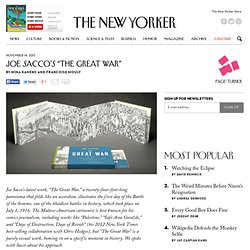 The Maltese-American cartoonist is best known for his comics journalism, including works like “Palestine,” “Safe Area Goražde,” and “Days of Destruction, Days of Revolt” (his 2012 New York Times best-selling collaboration with Chris Hedges), but “The Great War” is a purely visual work, homing in on a specific moment in history.

We spoke with Sacco about his approach. My Profile - My TES. Teaching the First World War, facts and resources.