Travel and Sightseeing: Directions Through Town (1) Whether you are on a sightseeing trip through Europe or backpacking in Australia, finding your way around the city while on vacation can be difficult unless you know what to say. 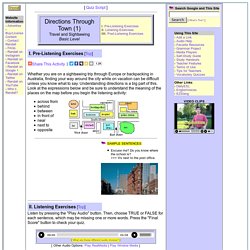 Understanding directions is a big part of this. Look at the expressions below and be sure to understand the meaning of the places on the map before you begin the listening activity: Listen by pressing the "Play Audio" button. Then, choose TRUE or FALSE for each sentence, which may be missing one or more words. Press the "Final Score" button to check your quiz. [ Other Audio Options: Play RealMedia | Play Window Media ] Listen to the sentences again as you read the Quiz Script.

Draw a neighborhood map of the area where you live (or a place you know well like a school or your work). Now, write your opinions on a similar topic at Randall's ESL Blog HERE. Randall's Sites: Daily ESL | ESL Blog | EZSlang | Train Your Accent | Tips For Students | Hiking In Utah. Giving directions. English Around the World - See English Speaking Countries. English as a global language. For more than half a century, immigrants from the Indian subcontinent and the West Indies have added variety and diversity to the rich patchwork of accents and dialects spoken in the UK. 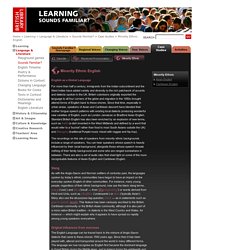 British colonisers originally exported the language to all four corners of the globe and migration in the 1950s brought altered forms of English back to these shores. Since that time, especially in urban areas, speakers of Asian and Caribbean descent have blended their mother tongue speech patterns with existing local dialects producing wonderful new varieties of English, such as London Jamaican or Bradford Asian English. Standard British English has also been enriched by an explosion of new terms, such as balti (a dish invented in the West Midlands and defined by a word that would refer to a 'bucket' rather than food to most South Asians outside the UK) and bhangra (traditional Punjabi music mixed with reggae and hip-hop). Slang Original influences from overseas. Listen to English around the World. Christmas shopping. Christmas shopping in London. 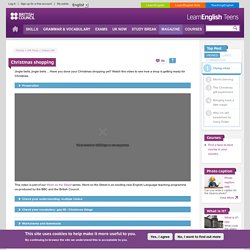 There’s nowhere like it in the world. When the West End Christmas lights go on and the big shops reveal their special Christmas window displays, it’s time for the festivities to begin. Fortnum & Mason, here in Piccadilly, has been selling the finer things in life around the world for over three hundred years. From chocolates to china, luxury goods are what Fortnum & Mason specialise in. And Christmas is their busiest time of the year. Today’s an important day. Paul Symes is the head of visual presentation and the creative force behind the Fortnum & Mason Christmas window display. Amandeep: This is so exciting, Paul. Paul: It’s all about dancing, burlesque, theatre, shows and glamour and style. Amandeep: And what are the challenges involved in designing something to this scale?

Paul: One of the challenges is trying to get it all to fit. Amandeep: So Paul, you’re about to reveal your Christmas shop window. Paul: Very, very. Andrea: It’s a hamper. Christmas. 22 Women Explorers Who Disovered Our World. The Most Useful Everyday Phrases in English. Traditional English language textbooks and courses will do a great job of introducing you to vocabulary and grammar, but they don't always teach you the important everyday phrases in English. 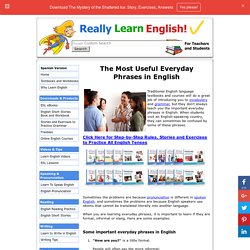 When students visit an English-speaking country, they can sometimes be confused by some of these phrases. Click Here for Step-by-Step Rules, Stories and Exercises to Practice All English Tenses Sometimes the problems are because pronunciation is different in spoken English, and sometimes the problems are because English speakers use idioms that cannot be translated literally into another language. When you are learning everyday phrases, it is important to learn if they are formal, informal or slang. What's in a name? Word on the Street. English news and easy articles for students of English. Shakespeare: Original pronunciation. Atlas of Prejudice.

7 Swedish words that English speakers shouldn’t be confused about. As an expat in Sweden (although I do speak Swedish), I sometimes find it difficult not to laugh at some of the Swedish words that have the exact same spelling of English words, but mean something extremely different. 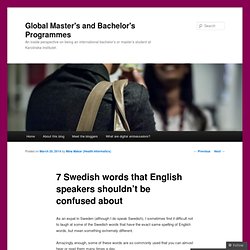 Amazingly enough, some of these words are so commonly used that you can almost hear or read them many times a day. Here’s a list of 7 words that I think English speaking people shouldn’t be confused about when they come to Sweden. * 1. The “A” in Swedish is pronounced like “Ah” which means that this word “bad” is not the one that you’re familiar with, but is pronounced “b(ah)d”. Apart from how it’s pronounced, Bad (n) = Bathroom (or pool sometimes as you can see in the pic) Bad (v) = Past tense of the verb “Ber” which means “Ask for/Pray” 2. Learning English - News about Britain. BBC World Service. BBC World Service.