Listen, Little Man! Isolation in America: Does Living Alone Mean Being Alone? Today living alone is common in nearly all of the most developed and affluent societies in the world. 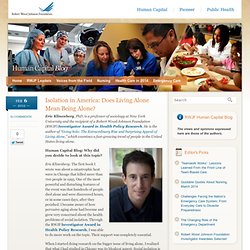 I had originally thought it was an American phenomenon but, in fact, it’s a global one. I believe that the rise of living alone is the biggest demographic change since the baby boom. In all of human history no society has ever sustained large numbers of people living alone for long periods of time. That began to change in the 1950s and 60s. So today we find ourselves in an unprecedented social experiment, and my book is the first comprehensive report on this social change. HCB: Is there a typical “singleton”—a person living alone? Klinenberg: We found four main groups of singletons from this study. Another group is adults age 35 to 65. The Truth Is, Philosophy Rules Your World : 13.7: Cosmos And Culture. A 2012 installation in the small Italian village of Corigliano d'Otranto celebrates the philosophies of Socrates, Plato and Aristotle and their search for a better way of life. 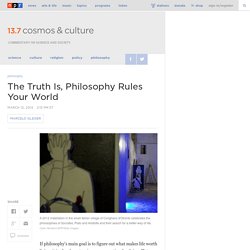 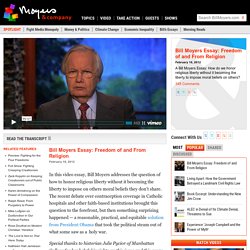 And something quite important to the health of our politics. He reached up and snuffed out what some folks wanted to make into a cosmic battle between good and evil. No, said the president, we’re not going to turn the argument over contraception into Armageddon, this is an honest difference between Americans, and I’ll not see it escalated into a holy war. So instead of the government requiring Catholic hospitals and other faith-based institutions to provide employees with health coverage involving contraceptives, the insurance companies will offer that coverage, and offer it free. The Catholic bishops had cast the president’s intended policy as an infringement on their religious freedom; they hold birth control to be a mortal sin, and were incensed that the government might coerce them to treat it otherwise.

When the president announced his new plan, the bishops were caught flat-footed. How To Raise Kids Who Aren't Narcissists. The guy right in front of you on the plane just stood up before the plane finished taxiing. 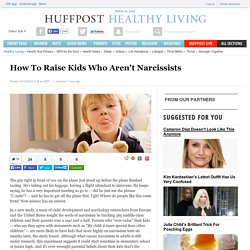 He's taking out his luggage, forcing a flight attendant to intervene. He keeps saying he has a very important meeting to go to -- did he just use the phrase "C-suite"? -- and he has to get off the plane first. Ugh! Where do people like this come from? In a new study, a team of child development and psychology researchers from Europe and the United States sought the seeds of narcissism by tracking 565 middle-class children and their parents over a year and a half. That's not to say that parents shouldn't be nice to their kids. Kids with narcissism agree with statements such as "I like to think about how incredibly nice I am" and "Kids like me deserve something extra. 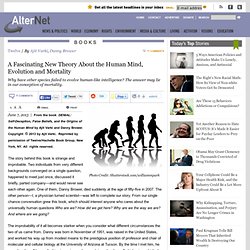 Join our email list: Stay up to date with the latest headlines via email. The internet: is it changing the way we think? Every 50 years or so, American magazine the Atlantic lobs an intellectual grenade into our culture. 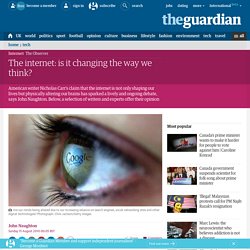 In the summer of 1945, for example, it published an essay by the Massachusetts Institute of Technology (MIT) engineer Vannevar Bush entitled "As We May Think". It turned out to be the blueprint for what eventually emerged as the world wide web. Two summers ago, the Atlantic published an essay by Nicholas Carr, one of the blogosphere's most prominent (and thoughtful) contrarians, under the headline "Is Google Making Us Stupid? ". "Over the past few years," Carr wrote, "I've had an uncomfortable sense that someone, or something, has been tinkering with my brain, remapping the neural circuitry, reprogramming the memory.

My mind isn't going – so far as I can tell – but it's changing. Does Your Language Shape How You Think? Seventy years ago, in 1940, a popular science magazine published a short article that set in motion one of the trendiest intellectual fads of the 20th century. 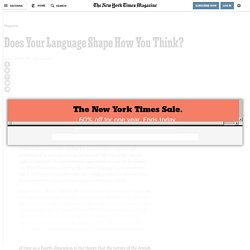 At first glance, there seemed little about the article to augur its subsequent celebrity. Neither the title, “Science and Linguistics,” nor the magazine, M.I.T.’s Technology Review, was most people’s idea of glamour. And the author, a chemical engineer who worked for an insurance company and moonlighted as an anthropology lecturer at Yale University, was an unlikely candidate for international superstardom.