Popcorn Stitch Tutorial. It has been a while since I last post a tutorial! 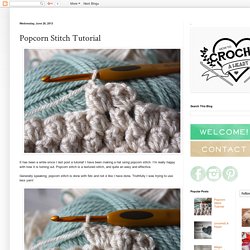 I have been making a hat using popcorn stitch. I'm really happy with how it is turning out. Popcorn stitch is a textured stitch, and quite an easy and effective. Generally speaking, popcorn stitch is done with 5dc and not 4 like I have done. Truthfully I was trying to use less yarn! To make one popped corn, 4 dc. (4 tr for UK)(The first popcorn of a round has 3ch and 3dc) Remove hook from work.

Hook through the top of the first dc then back into last hook, pull back to normal size Yarn over hook and through both loops In the hat I am making I am putting one chain in between each popcorn, and each row is worked into that chain space of the previous row. Crochet. This cushion has been such a happy project to work on, a quick and spontaneous make which I used to test out my new Raindrops stitch pattern. 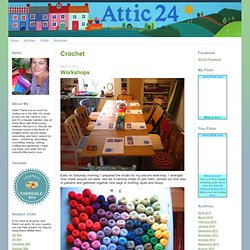 I also wanted to try using chunky yarn for the first time, so the combination of the new stitch and the new yarn was a whole new experience for me. I've used Stylecraft Special Chunky yarn, worked on a 6mm hook, in eight colours as follows :: ♥ Raspberry ♥ Lipstick ♥ Fondant ♥ Camel ♥ Meadow ♥ Aspen ♥ Lavender ♥ Denim There is enough yarn here to make two of these cushions, you only actually need 4 x 100g balls of chunky to make a 45cm cushion in this pattern.

Unusually for me, I chose to order these colours into a repeating stripe (you know I usually go for random, so this was yet another new experience for me). The very rainbowyness of this project really did lift my spirits and the very chunkyness of the yarn made the rainbow stripes grow satisfyingly fast. I tried hard to deal with my tail ends methodically as I went along. ....like so. Tunisian Lacy Simple Stitch. Crochet that looks like knitting. When I first discovered this technique I thought I had the answer to my dreams - a way to make knitting with crochet. 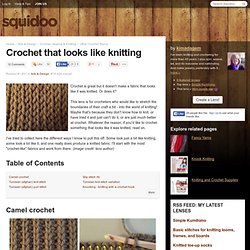 And the fabric it makes does look like it was knitted. But it's bulkier than knitting - not surprising because most crochet stitches are. Also, it tends to curl if not worked very loosely or blocked (which I think you can see in the photo above; none of the sample pieces I made for this lens were blocked).

But if those issues don't bother you this is a good way to mimic knitting with crochet. The technique itself is done the "normal" way - in other words, you don't have to turn it sideways to see the stitch pattern. It's possible to make both "knit" and "purl" stitches this way, and you can use them to make different patterns; for example, making all "knit" stitches produces a fabric like knitted stockinette stitch, while alternating "knit" and "purl" rows produces a fabric that looks like knitted garter stitch. 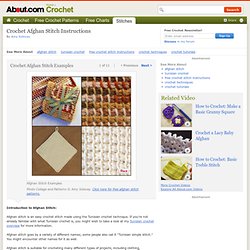 If you're not already familiar with what Tunisian crochet is, you might wish to take a look at my Tunisian crochet overview for more information. Afghan stitch goes by a variety of different names; some people also call it "Tunisian simple stitch. " You might encounter other names for it as well.

Afghan stitch is suitable for crocheting many different types of projects, including clothing, accessories, home decor, pet items, toys and more. Afghan Hooks: Crocheted linen stitch. Blackberry Salad Stitch Part Deux - The Throw! The Blackberry Salad Striped Baby Blanket pattern was originally written up for a baby sized blanket, but of course, it can work for everything from a dishcloth to a king sized bedspread! 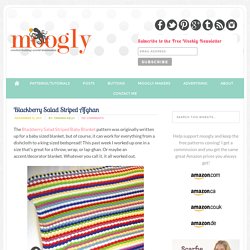 This past week I worked up one in a size that’s great for a throw, wrap, or lap-ghan. Or maybe an accent/decorator blanket. Whatever you call it, it all worked out. Blackberry Salad Striped AfghanAdd this pattern to your Ravelry Queue Hobby Lobby’s I Love This Yarn, 8 skeins (2840 yards)I /9 – 5.50 mm HookFinished size: 50″ x 46″ (scroll to the bottom of this pattern for additional sizing info)Blackberry Stitch Pattern Chart (hand drawn)Video Tutorial: How to make the Bobble Stitch, or dc5togNeed a visual rather than written instructions? Starting chain: 167 Row 1: (RS) Dc in 4th ch from hook. Crochet Geek - How to Make the Crochet Entrelac Stitch. Bundling up for sledding.... Discovering a new crochet stitch… Nov12. 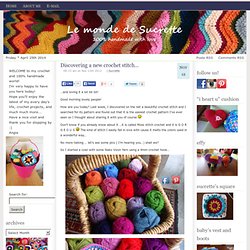 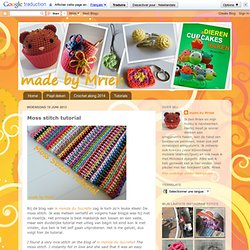 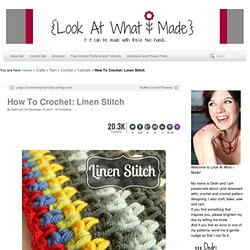 You might know it by a different name, and if you do, please let me know. It is one of the simplest stitch patterns to master and yields a pretty, woven, dense fabric. The reason it is so simple is that you don’t even have to know how to work into the loops of the single crochet stitches, because you will be working into the ch-1 spaces between single crochet stitches instead. How to Crochet the Even Moss Stitch NewStitchaDay. This video crochet tutorial will help you learn how to crochet the even moss stitch. 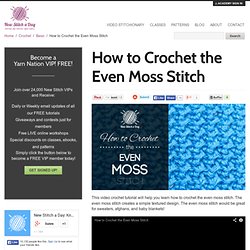 The even moss stitch creates a simple textured design. The even moss stitch would be great for sweaters, afghans, and baby blankets! SOYSILK® brand fiber is made from the residue of soybeans from tofu manufacturing. This process is 100-percent natural and free of any petrochemicals, making it an extremely environmentally friendly product. SOYSILK® brand fiber offers superior moisture absorption and ventilation properties along with beautiful draping, softness and warmth. 1-29-11 Tunisian Crochet Afghan. An Eclectic Life: Linen Stitch. I know it's been a while since St. 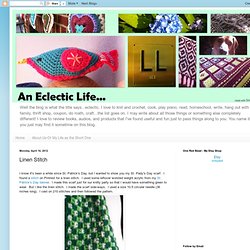 Patrick's Day, but I wanted to show you my St. Pady's Day scarf. TextureStitchAfghan_3. Tapestry Crochet. If you haven’t seen Marina Gavrilov’s striking tapestry crochet, then you’re in for a treat! I first noticed her wonderful bags on the “recently shared projects” window of the Ravelry Tapestry Crochet group. Lots of great items pop up there, but almost every time I linked to something that caught my attention, it was by RuskaM (her Ravelry name).

Marina describes herself as “. . . a mathematician by education but I am also a great lover of fine arts and crafts. One of my true pleasures is making tapestry crochet bags.