How to Make a Fox Puppet : 12 Steps. It’s easiest to trace and cut as you go, one color at a time. 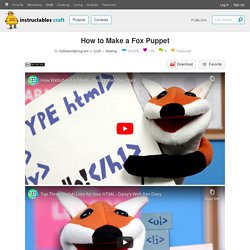 We’ll start with orange since that’s our main color. The body, part of the arms, and part of the ears all use orange fleece. There are two sides to the fabric known as the “wrong” and “right” sides. The right side is the side of the fabric you want to show when everything is all sewn together. Look at your fleece and decide which side is wrong and which side is right. Then trace the ear piece twice. And trace the arm pattern #1 twice. That’s all of the orange pieces, so locate your sewing sheers and carefully snip away! Be extra cautious when cutting the darts for the ears so you don’t accidentally cut off the head. 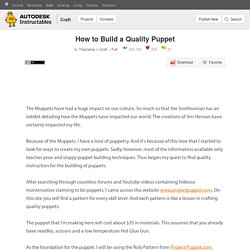 When you do this, it creates seams. These seams can be hidden, however, using a stitch Jim Henson developed. This stitch is often referred to as the Henson Stitch, Puppet Stitch, or Ladder Stitch as seen in this link by TheCreatureWorks. This stitch works best on fabrics that are fuzzy. If you try to use this on non-fuzzy fabric you will get a strange zigzag effect on the seam. Muppet Wiki. Hand stitched Kermit the Frog puppet replica!! (Early builds/old patterns) After quite some time experimenting and practicing, I went ahead and made a puppet replica of Kermit the Frog; something that I've wanted to do for years, but wasn't sure if I would be able to do. 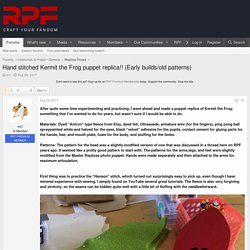 Materials: Dyed "Antron" type fleece from Etsy, dyed felt, Ultrasuede, armature wire (for the fingers), ping pong ball spraypainted white and halved for the eyes, black "velvet" adhesive for the pupils, contact cement for gluing parts for the hands, feet, and mouth plate, foam for the body, and stuffing for the limbs. Patterns: The pattern for the head was a slightly modified version of one that was discussed in a thread here on RPF years ago. It seemed like a pretty good pattern to start with. The patterns for the arms,legs, and feet were slightly modified from the Master Replicas photo puppet. Hands were made separately and then attached to the arms for maximum articulation. Next was building up the body. Muppet Central Forum. Made some alterations to the head, reshaped the body plug, replaced the arms stuffing with shaped foam inserts, added black sleeve attached to the inner lining that can tuck inside or pull up and over the green sleeve, added new legs giving him a more shaped thigh and calf. 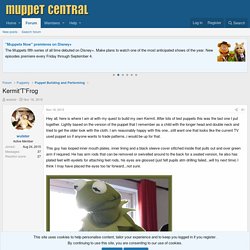 Still want to add a little thin foam into the head to point it up more, tested it with stuffing and it made it look better but need to find some thin foam. Getting there now, still not completely happy with this one but will leave it another couple of weeks to look at it with fresh eyes again. Just remember this is not based on the current Kermit, it is more a mix of some of my favourite parts from various versions. When I am finally happy with this dude ill most likely do a current one though I am pretty sure they have mixed up some of the current puppets as the one in the new tv show has a noticeable blemish where a removed Constantine mole has been. Ecl's Kermit the Frog Puppet Replica (later builds, using my newest patterns) 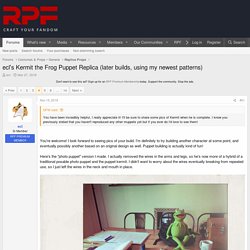 I no longer use styrene for my mouth-plates on my new builds. I recommend something like a gasket rubber; that’s basically a thin rubber sheet. It’s much more flexible. Where Do Hand Puppets Come From - Theater Seat Store. History of American Puppetry. Urbano Puppets A major source for this quick overview is the 700 page book The Puppet Theatre in America by Paul McPharlin and Marjorie Batchelder McPharlin. 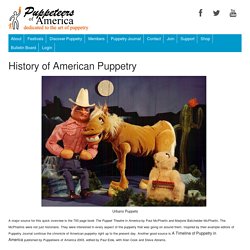 The McPharlins were not just historians. They were interested in every aspect of the puppetry that was going on around them. Inspired by their example editors of Puppetry Journal continue the chronicle of American puppetry right up to the present day. Another good source is A Timeline of Puppetry in America published by Puppeteers of America 2003, edited by Paul Eide, with Alan Cook and Steve Abrams. Compiled by Steve Abrams Before radio, television, videotape, the internet, interstate highways, and airplanes puppeteers entertained audiences around the country.

Tony Sarg set up shop in New York City in 1915 and the same year Ellen Van Volkenberg did shows in Chicago and Helen Haiman Joseph did shows in Cleveland. Before World War II PofA had 6 successful festivals. The Best Books on Puppeteering. Can you tell me about some of the books that have directly or indirectly influenced your practice over the years? 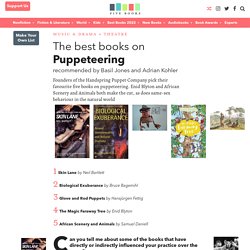 The books that we have chosen are not necessarily about theatre per se, but they have had a profound influence on our practice in theatre, either because of the way that they have handled themes that we have wanted to explore but did not know how, or because they helped with practical elements of our work. Our first book is Skin Lane by Neil Bartlett, an activist, a gay writer, a playwright, and also the director of the Lyric Theatre in Hammersmith. This novel set in the sixties, is about a fifty-year-old man, a furrier, who doesn’t know anything about his sexuality. While most gay novels are about the gay, usually American, lifestyle – a kind of Los Angeles gay scene – this one is about a character who doesn’t know he’s gay. This serendipitous read has led to your work on a new play for the National Theatre. The infamous Henson stitch... Puppeteering - Wurmpedia. Main / Skills / Toys / Puppeteering Description Puppeteering is the skill used to put on a show with puppets: Fo, Libila, Magranon, and Vynora puppet. 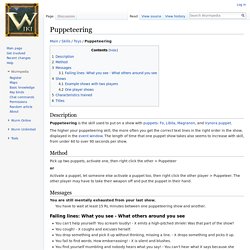 The higher your puppeteering skill, the more often you get the correct text lines in the right order in the show, displayed in the event window. The length of time that one puppet show takes also seems to increase with skill, from under 60 to over 90 seconds per show. Method. Ron Binion. How to Build a Hand and Rod Puppet PART 1 - Understructure. CLICK on the links below to find the materials you need for this lesson. 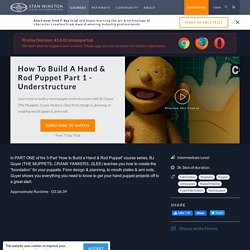 Some items might be harder to find, but a little internet scouring usually finds you everything you'll need. Foam Mart Burman Industries Robin's Hobby Jo-Ann Fabrics BJ Guyer's Puppet Patterns: If you would like the Patterns that BJ talks about please email info@stanwinstonschool.com with your payment confirmation of the class and we will email them to you. 12" x 12" piece of 1/8" or 3/16" Thick Birch Plywood from Model Airplane Shop.

How to Make a Homemade Puppet Theatre - Let's Play Music.