The Japanese Art of Sashiko Stitching. Riding the tide of the indigo trend, Japanese antique boro cloths have become increasing popular in design. 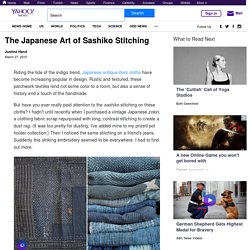 Rustic and textured, these patchwork textiles lend not some color to a room, but also a sense of history and a touch of the handmade. But have you ever really paid attention to the sashiko stitching on these cloths? I hadn't until recently when I purchased a vintage Japanese zokin, a clothing fabric scrap repurposed with long, contrast stitching to create a dust rag. (It was too pretty for dusting; I've added mine to my prized pot holder collection.) Then I noticed the same stitching on a friend's jeans. Above L: Sashiko stitching on an antique boro cloth. SRI Threads. A Very Abraded and Beautiful Pakistani Ralli: Textile Archaeology November 1, 2012 Today I’m showing a super-amazing, large Pakistani ralli. 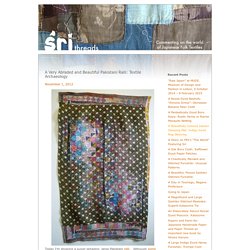 Although some rallis show a surface that is highly abraded–and beautiful–this one is just fascinating for HOW it’s been abraded. You can see that through a worn-away brown figured surface there is the suggestion of another layer of patterning. What this is is fascinating: the original surface of this ralli was piece constructed like the rallis seen here. Feast your eyes. How to Make a kantha Bedspread - HandiCrunch. How to Make a Kantha Quilt: 9 Tutorials. Share this post Kantha quilts are made by stitching together flattened layers of old saris or old discarded clothes together. 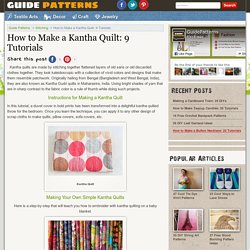 They look kaleidoscopic with a collection of vivid colors and designs that make them resemble patchwork. Originally hailing from Bengal (Bangladesh and West Bengal, India), they are also known as Kantha Gudri quilts in Maharastra, India. Using bright shades of yarn that are in sharp contrast to the fabric color is a rule of thumb while doing such projects. The Wonders of Handmade Rallis (Quilts) Colorful quilts with contrasting patterns, themes and fabrics have been quite trendy in Pakistan and across its various cities since ages. 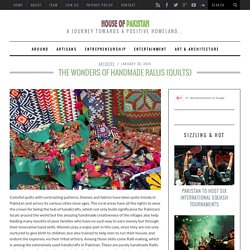 The rural areas have all the rights to wear the crown for being the hub of handicrafts, which not only build significance for Pakistani locals around the world but the amazing handmade creativeness of the villages also help feeding many mouths of poor families who have no such way to earn money but through their innovative hand skills. Women play a major part in this case, since they are not only nurtured to give birth to children, but also trained to help men to run their houses and endure the expenses via their tribal artistry. Among those skills come Ralli making, which is among the extensively used handicrafts in Pakistan. Ralli Quilts. Women in the Indus Region of the Indian subcontinent make beautiful quilts with bright colors and bold patterns. 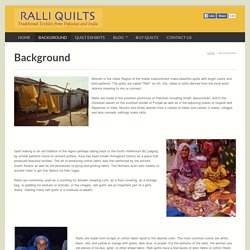 The quilts are called "Ralli" (or rilli, rilly, rallee or rehli) derived from the local word ralanna meaning to mix or connect. Rallis are made in the southern provinces of Pakistan including Sindh, Baluchistan, and in the Cholistan desert on the southern border of Punjab as well as in the adjoining states of Gujarat and Rajasthan in India. Muslim and Hindu women from a variety of tribes and castes in towns, villages, and also nomadic settings make rallis. Quilt making is an old tradition in the region perhaps dating back to the fourth millennium BC judging by similar patterns found on ancient pottery. Asia has been known throughout history as a place that produced beautiful textiles. Rallis are commonly used as a covering for wooden sleeping cots, as a floor covering, as a storage bag, or padding for workers or animals. 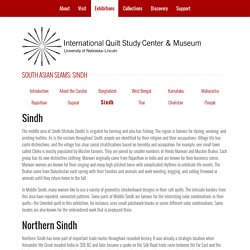 Ralli quilt. Ralli quilts are traditional quilts made by women in the areas of Sindh, Pakistan, western India, and in surrounding areas. 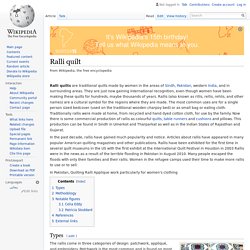 They are just now gaining international recognition, even though women have been making these quilts for hundreds, maybe thousands of years. Rallis (also known as rillis, rellis, rehlis, and other names) are a cultural symbol for the regions where they are made. The most common uses are for a single person sized bedcover (used on the traditional wooden charpoy bed) or as small bag or eating cloth. Traditionally rallis were made at home, from recycled and hand dyed cotton cloth, for use by the family. Now there is some commercial production of rallis as colourful quilts, table runners and cushions and pillows. In the past decade, rallis have gained much popularity and notice. In Pakistan, Quilting Ralli Applique work particularly for women's clothing Types[edit] Rilli (Ralli Quilts) - Indus Crafts.

Late Night Quilter. India Flint - home paddock. Ode to Kantha – The Simple Running Stitch Exhibits a Lot of Potential. Kantha – is it quilting or is it embroidery? 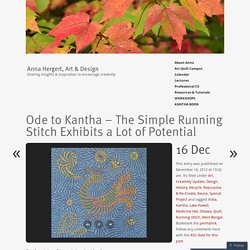 The following post was researched and compiled for the Canadian Quilter Magazine, Winter 2011. I have revised and augmented the article to share it with you today. In 1998 shortly after I had embarked on my London City and Guilds education one of the objectives was to research Kantha Embroidery and create a small sample. At that point I had never heard of Kantha, and not one of my quilting and embroidery friends was able to provide me with specific insights. In fact none of the fibre artists I was connected with was familiar with the Kantha technique.

I love a challenge, and with that my research began in earnest, starting within my personal library where I was able to find a short paragraph describing the Kantha technique in “World Textiles” by John Gillow and Bryan Sentance. Eventually a dog-eared techniques book from England, Embroidered Textiles by Sheila Paine, fell into my hands when visiting a second-hand bookstore. Like this: Related. HandandCloth - The Kantha Tradition. Sanaih kantha Sanaih pantha Sanaih parvata langhanam. 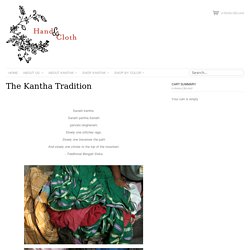 Slowly one stitches rags, Slowly one traverses the path And slowly one climbs to the top of the mountain. - Traditional Bengali Sloka. Running Stitch Scarf. The humble running stitch is such a building block of embroidery that it rarely gets a chance to be the star of the show. 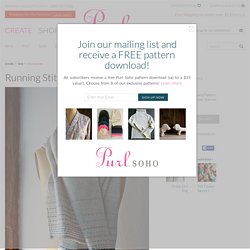 But why not? The simplicity of this stitch, both in practice and in looks, should be a virtue! So for an uncomplicated and elegant Mother’s Day gift, I turned to the regular rhythm of the running stitch! A rich spectrum of DMC embroidery floss travels from inky navy to cloudy gray atop a natural flaxen background. Sashiko: Traditional Japanese Sashiko Design & Instruction. Here are some common rules of stitching to achieve clean and elegant end result.

Space the stitches when pattern lines meet, so they don’t touch. This will make the pattern look more elegant. Sashiko. Sashiko embroidery is one of my favorite crafts.