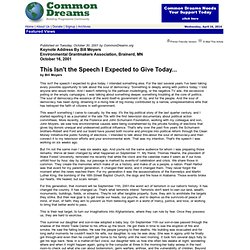 I intended something else. For the last several years I've been taking every possible opportunity to talk about the soul of democracy. 'Something is deeply wrong with politics today,' I told anyone who would listen. And I wasn't referring to the partisan mudslinging, or the negative TV ads, the excessive polling or the empty campaigns.

I was talking about something deeper, something troubling at the core of politics. This wasn't something I came to casually, by the way. But I'm not the same man I was six weeks ago. For this generation, that moment will be September 11th, 2001-the worst act of terrorism in our nation's history. This is their real target, to turn our imaginations into Afghanistans, where they can rule by fear. This summer our daughter and son-in-law adopted a baby boy. None of us is spared. Returning from Washington on the train last week, I looked up and for the first time in days saw a plane in the sky. Geography Strikes Back. Odysseus' Journey. A story map. 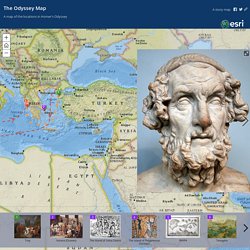 Timeless Myths. Behind Tomb Connected to Alexander the Great, Intrigue Worthy of "Game of Thrones" Suspense is rising as archaeologists sift for clues to the identity of the person buried with pomp and circumstance in the mysterious Amphipolis tomb in what is now northern Greece. 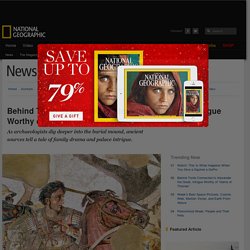 The research team thinks the tomb was built for someone very close to Alexander the Great—his mother, Olympias; one of his wives, Roxane; one of his favorite generals; or possibly his childhood friend and lover, Hephaestion. Over the past three months, archaeologist Katerina Peristeri and her team have made a series of tantalizing discoveries in the tomb, from columns sculpted masterfully in the shapes of young women to a mosaic floor depicting the abduction of the Greek goddess Persephone.

The tomb's costly artwork all dates to the tumultuous time around the death of Alexander the Great, and points to the presence of an important person. Alexander himself was almost certainly buried in Egypt. Palace Intrigues For a time, her intrigues seemed to succeed. Photograph by the Greek Culture Ministry, EPA. The Barbarians: An Essay On the Mutation of Culture: Alessandro Baricco, Stephen Sartarelli: 9780847842919: Amazon.com: Books. 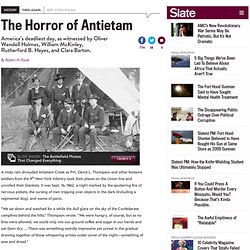 David L. Thompson and other footsore soldiers from the 9th New York Infantry took their places on the Union line and unrolled their blankets. It was Sept. 16, 1862, a night marked by the sputtering fire of nervous pickets, the cursing of men tripping over objects in the dark (including a regimental dog), and waves of panic. “We sat down and watched for a while the dull glare on the sky of the Confederate campfires behind the hills,” Thompson wrote.

“We were hungry, of course, but as no fires were allowed, we could only mix our ground coffee and sugar in our hands and eat them dry. ... Two great armies were steeling themselves for what would become the deadliest one-day battle in American history. North and South fought in the open at close quarters—usually no more than 300 yards apart—with no protective earthworks to soften the blows. Who Brought Freedom, Gandhi or Netaji? – Folks Magazine. Penned by Dr. NS Rajaram in the year 2010, this story is relevant even to this day. Enumerating several contributions of Netaji – as Subhas Chandra Bose was fondly known – it is probably one of the greatly read articles on Folks Magazine. We invite you all to read it yet again to celebrate Netaji’s 115th birth anniversary.

There is a story that the late Mao Zedong, when asked his opinion about Napoleon as a leader replied: “How can I say? He is too recent.” In India, people are brought up on the story that Mahatma Gandhi and Jawaharlal Nehru—with others receive grudging notice if at all—led a heroic struggle freeing India from the British rule. This received a jolt during a recent trip to Southeast Asia where I had occasion to visit some people who had served with my late father during World War II. Reassessing Gandhi’s Role in Freedom Movement — Part Two. eHistory.com: World History Timelines. World History : HyperHistory.