The Problem Is Overpolicing. (Photo: Thomas Hawk) Once again we are confronted by the horrifying images of black men being killed by the police. 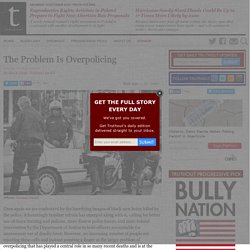 A hauntingly familiar refrain has emerged along with it, calling for better use-of-force training and policies, more diverse police forces, and more federal intervention by the Department of Justice to hold officers accountable for unnecessary use of deadly force. However, an increasing number of people are rejecting these calls and instead pointing a finger at the larger problem of overpolicing that has played a central role in so many recent deaths and is at the center of the problem of policing in America. Morehouse professor Marc Lamont Hill, on Democracy Now, said that we "have to ask what role do we really want police officers to have?

Do we want them to be an occupying force in our community? " We need to start asking why we have so much law enforcement in the first place, and whether much of it is truly needed. There's Something Disturbing About The Way Cops Act Just After They've Shot Somebody. In the Dallas sniper attack, the primary argument of the NRA and pro-gun advocates was completely debunked — Quartz.

“The only way to stop a bad guy with a gun is with a good guy with a gun,” National Rifle Association (NRA) executive vice president Wayne LaPierre infamously declared following the Newtown, Connecticut school shootings in 2012. 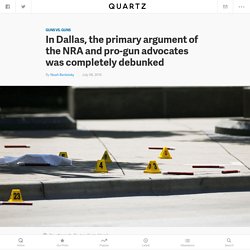 The vision of armed heroes killing armed villains and preventing loss of life is a staple of the NRA narrative, as well as of Hollywood films. In Dallas, though, it didn’t work that way. Following a peaceful Black Lives Matter protest, at least one sniper opened fire on police. Despite the presence of armed law enforcement, the shooter did great harm before he could be stopped. The case for disarming America’s police force — Quartz. “Black people have been killed by the police at a tragically disproportionate rate, beyond the bounds of anything that would justify it.” 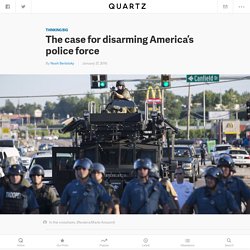 That sounds like a quote from a contemporary Black Lives Matter activist. But those words were written back in 1974 by American criminologist Paul Takagi. Takagi, an expert in police use of force and community policing, proposed an idea that still seems radical more than 40 years later. “Perhaps,” he said, “the only immediate solution at this time is to disarm the police.” There’s a broad consensus in the US today that local police forces need to be demilitarized. Ending police access to armored vehicles is one thing. An uphill battle The idea of taking guns away from police is likely to receive a highly skeptical response, even from people concerned about the problem of excessive force. Yet there is some evidence that disarming the police might be less dangerous that it sounds. International precedents. How do police handle violence in countries where officers don’t carry guns? — Quartz.

Think you have the right to demand police identify themselves? Look closer. Police officers are required to display and provide their identification on request—except when they aren't. 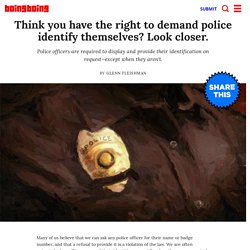 Anchorage, AK Anchorage Police Department Regulations and Procedures Manual, 1.03.005I, 2009 Employees while on official business shall upon request immediately identify themselves by giving their name, rank, and DSN, and by displaying their badge or official credentials unless such action is likely to jeopardize successful completion of a police assignment. This information will be produced in a professional and courteous manner. Los Angeles CA 2014 1st Quarter Los Angeles Police Department Manual, 603.20, 2014 On-duty employees shall have their Department-issued identification card in their immediate possession. Chicago IL. Citizen Teaches Cops About The Law. Dont Talk to Police. About Us. Photography is Not a Crime was launched in 2007 after Miami multimedia journalist Carlos Miller was arrested for taking photos of Miami police during a journalistic assignment in order to document his trial. 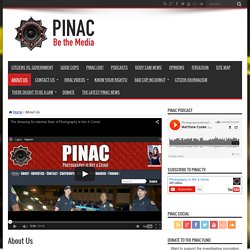 He quickly learned that citizens from all over the country were being harassed, threatened and arrested for recording in public, so he began documenting these incidents on his blog as he waited for his trial to begin. By the time he went to trial more than a year later, the blog had developed a significant following who not only began learning about their rights, but also exercising those rights, many of them equipped with newly introduced smartphones which allowed them to record and upload videos instantly, something that had never been possible before. Campaign Zero. Police Killings Surpass the Worst Years of Lynching, Capital Punishment, and a Movement Responds. The death penalty still exists, but USA Today recently described it as on “life support.” 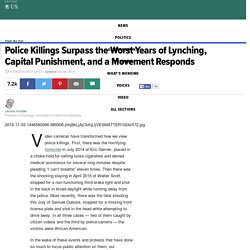 Last year, just 35 people were executed in the United States; this year it will almost certainly be fewer than 30 — the lowest number in 21 years. Since 2007, New Jersey, Nebraska, Maryland, Illinois, New Mexico, New York and Connecticut have joined the 12 states that had already banned the death penalty. Though capital punishment is still on the books in 31 states, only nine of them have executed a single person in the last three years. To be sure, it would be rash to conclude that the death penalty is definitely on the road to total abolition.

Building Momentum from the Ground Up. The Simple Strategies That Could Fundamentally Change How Communities View Their Police. Raising a black son, Gail Howard couldn’t shake the fear that someday, he was going to get shot. 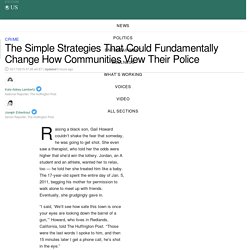 She even saw a therapist, who told her the odds were higher that she’d win the lottery. Jordan, an A student and an athlete, wanted her to relax, too — he told her she treated him like a baby. The 17-year-old spent the entire day of Jan. 5, 2011, begging his mother for permission to walk alone to meet up with friends. Eventually, she grudgingly gave in. “I said, ‘We’ll see how safe this town is once your eyes are looking down the barrel of a gun,’” Howard, who lives in Redlands, California, told The Huffington Post. Jordan and one of his friends were lucky enough to survive the gang shooting that took place that day; two other boys who were with them at the playground were not. “They did not stop until they figured out who shot my boy and his friends,” Howard said of the Redlands police, who eventually caught the shooters; they were convicted and sentenced to life behind bars. The U.S.