IMG_0386. Primary History - World War 2 - The war ends. AAME : Europeans Explore the World - Common Core lesson. In the second half of the 15th century, European sailors began to plan voyages that would take them beyond the limits of the world they knew. 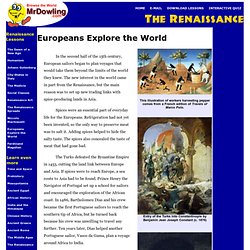 The new interest in the world came in part from the Renaissance, but the main reason was to set up new trading links with spice-producing lands in Asia. Spices were an essential part of everyday life for the Europeans. Refrigeration had not yet been invented, so the only way to preserve meat was to salt it. Adding spices helped to hide the salty taste. The spices also concealed the taste of meat that had gone bad. African - Introduction - Immigration…- Classroom Presentation. Introduction The story of African immigration is unique among immigrant groups, just as the African experience in America has been uniquely central to the course of American life. 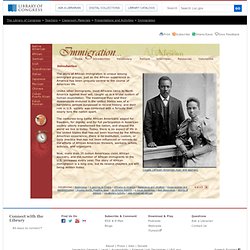 Unlike other immigrants, most Africans came to North America against their will, caught up in a brutal system of human exploitation. The treatment they and their descendents endured in the United States was of a harshness seldom surpassed in recent history, and their role in U.S. society was contested with a ferocity that nearly tore the nation apart.

African - Beginnings - Immigration…- Classroom Presentation. Beginnings Explorers and ColonistsWhen Africans first came to the New World, they came of their own free will, and they arrived at virtually the same moment as the first Europeans. 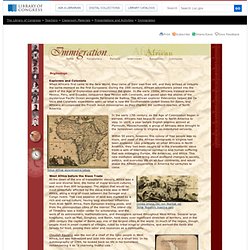 During the 16th century, African adventurers joined into the spirit of the Age of Exploration and crisscrossed the globe. In the early 1500s, Africans trekked across Mexico, Peru, and Ecuador, conquered New Mexico with Coronado, and gazed upon the shores of the mysterious Pacific Ocean alongside Ferdinand de Balboa. The African explorer Estevanico helped the De Vaca and Coronado expeditions open up what is now the Southwestern United States for Spain, and Africans accompanied the French Jesuit missionaries as they charted the northern reaches of North America. London History - A Population History of London - Central Criminal Court. The Demography of Urban Growth Humanity's first 'world city' was a seething and constantly growing metropolis of the young. 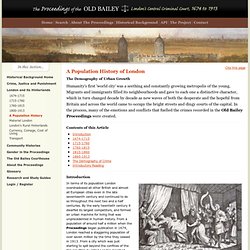 Migrants and immigrants filled its neighbourhoods and gave to each one a distinctive character, which in turn changed decade by decade as new waves of both the desperate and the hopeful from Britain and across the world came to occupy the bright streets and dingy courts of the capital. In the process, many of the emotions and conflicts that fuelled the crimes recorded in the Old Bailey Proceedings were created. 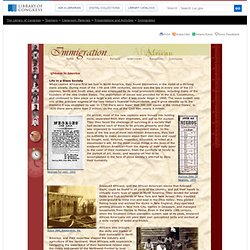 During most of the 17th and 18th centuries, slavery was the law in every one of the 13 colonies, North and South alike, and was employed by its most prominent citizens, including many of the founders of the new United States. The importation of slaves was provided for in the U.S. Constitution, and continued to take place on a large scale even after it was made illegal in 1808. Scandinavian - Introduction - Immigration...- Classroom Presentation. Introduction Before the 19th century, the people of the Scandinavian lands—Norway, Sweden, Denmark, Finland, and Iceland—had often visited North America. 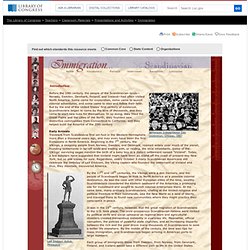 Some came for exploration, some came to launch colonial adventures, and some came to stay and follow their faith. JOURNEY OF MANKIND - Start of Migration. Ellis Island. Ellis Island, now a 27.5-acre site located just minutes off the southern tip of Manhattan Island, New York, is likely to connect with more of the American population than any other spot in the country. 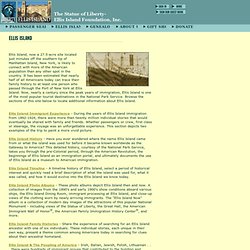 It has been estimated that nearly half of all Americans today can trace their family history to at least one person who passed through the Port of New York at Ellis Island. Now, nearly a century since the peak years of immigration, Ellis Island is one of the most popular tourist destinations in the National Park Service. Browse the sections of this site below to locate additional information about Ellis Island. Push and Pull Factors: 19th Century Migration: Newfoundland and Labrador Heritage. Push and Pull Factors Newfoundland and Labrador's permanent population rapidly expanded during the first half of the 19th century, largely due to an influx of English, Irish, and Scottish immigrants. 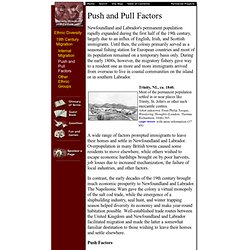 Until then, the colony primarily served as a seasonal fishing station for European countries and most of its population remained on a temporary basis only. During the early 1800s, however, the migratory fishery gave way to a resident one as more and more immigrants arrived from overseas to live in coastal communities on the island or in southern Labrador. A wide range of factors prompted immigrants to leave their homes and settle in Newfoundland and Labrador.

Overpopulation in many British towns caused some residents to move elsewhere, while others wished to escape economic hardships brought on by poor harvests, job losses due to increased mechanization, the failure of local industries, and other factors. German - Shadows of War - Immigration...- Classroom Presentation. Shadows of War For German Americans, the 20th century was a time of growth and consolidation; their numbers increased, their finances became more stable, and Americans of German heritage rose to positions of great power and distinction. 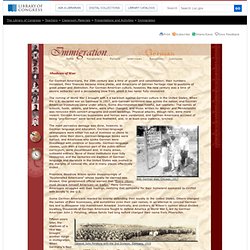 For German American culture, however, the new century was a time of severe setbacks--and a devastating blow from which it has never fully recovered. Post-World War II Migration. As the countries of Europe recovered from World War II, they again became attractive destinations for potential migrants and opened their doors to immigrants to help rebuild their economies. 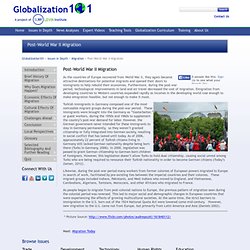 Furthermore, during the post-war period, technological improvements in land and air travel decreased the cost of migration. Emigration from developing countries to Western countries expanded rapidly as incomes in the developing world rose enough to make emigration feasible, but not enough to make it moot. Turkish immigrants in Germany composed one of the most noticeable migrant groups during the post-war period. These immigrants were brought into the Germany as “Gastarbeiter,” or guest workers, during the 1950s and 1960s to supplement the country’s post-war demand for labor. African - A Journey in Chains - Immigration…- Classroom Presentation. A Journey in Chains CaptureMost Africans began their journey into slavery at the hands of other Africans. While Europeans owned and operated the slave ships, the work of kidnapping new victims was generally left to West Africans. Bands of slavers would roam the African countryside, preying on villagers who let their guard down.

Olaudah Equiano was abducted when he was 8 years old. One day, when all our people were gone out to their works as usual, and only I and my dear sister were left to mind the house, two men and a woman got over our walls and in a moment seized us both, and, without giving us time to cry out, or make resistance, they stopped our mouths, and ran off with us into the nearest wood. Scandinavian - Scandinavian America - Immigration...- Classroom Presentation. Scandinavian America The Scandinavian immigrants not only built new lives in the United States; they also built a new culture. As immigrants from Scandinavia flooded into sparsely populated areas of the U.S., they helped create a particularly Scandinavian way of life, melding the varied religious, culinary, literary, and linguistic traditions that they brought with them with those that they found in their new country.

During the late 19th and early 20th centuries, in the Great Lakes states, the northern Great Plains, and in enclaves scattered among northern U.S. cities, a visitor might imagine that he or she was traveling through a unique new nation—Scandinavian America. Language and Education As Scandinavian immigrants arrived in the U.S., they brought a diverse group of native languages with them, and they quickly established institutions to nurture and promote their linguistic heritage. The Vikings. European colonization of the Americas. Encyclopedia Britannica. European exploration, the exploration of regions of the Earth for scientific, commercial, religious, military, and other purposes by Europeans beginning in the 15th century. The motives that spur human beings to examine their environment are many.

Strong among them are the satisfaction of curiosity, the pursuit of trade, the spread of religion, and the desire for security and political power. At different times and in different places, different motives are dominant. Sometimes one motive inspires the promoters of discovery, and another motive may inspire the individuals who carry out the search. European Explorers - Home. This webpage was created by Sharon Amolo. Sharon Amolo is a Media Specialist at Gwin Oaks Elementary in Lawrenceville, Georgia.

European colonisation in the 19th and 20th Centuries. Europe's colonial expansion : colonization of Africa, colonization of Asia, Indian Empire, French Colonial Empire, British Empire, colonies and colonial empires of European countries European countries began exploring and seeking to dominate the rest of the world during the 15th and 16th centuries, thanks to their ability to control sea routes and to the discovery of the American continent. In the 19th century, energized by the industrial revolution and under pressure from a rapidly growing population, Europe launched a new period of colonial expansion, inspired by the discovery of new markets, new areas for the settlement of Europe’s poor migrants, and the desire to " civilize the barbarian nations ".

European Imperialism in the 19th Century The industrial revolution and pressure from a growing population in Europe led to a new phase of colonial expansion. Emigration of Europeans to the Far Corners of the World. Genghis Khan BBC 5/5. Migrations in History. Migration throughout history.