ARKive - Discover the world's most endangered species. WWF: Illegal Wildlife Trade. The world is dealing with an unprecedented spike in illegal wildlife trade, threatening to overturn decades of conservation gains. 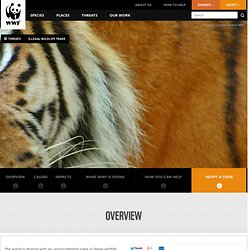 Ivory estimated to weigh more than 23 metric tons—a figure that represents 2,500 elephants—was seized in the 13 largest seizures of illegal ivory in 2011. Poaching threatens the last of our wild tigers that number as few as 3,200. Wildlife crime is a big business. Run by dangerous international networks, wildlife and animal parts are trafficked much like illegal drugs and arms. By its very nature, it is almost impossible to obtain reliable figures for the value of illegal wildlife trade. Some examples of illegal wildlife trade are well known, such as poaching of elephants for ivory and tigers for their skins and bones. Stamping out wildlife crime is a priority for WWF because it’s the largest direct threat to the future of many of the world’s most threatened species. WWF: Wildlife Trade. What is wildlife trade? 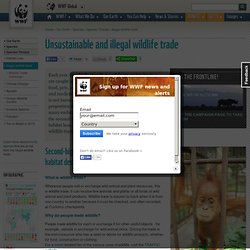 Whenever people sell or exchange wild animal and plant resources, this is wildlife trade. It can involve live animals and plants or all kinds of wild animal and plant products. Wildlife trade is easiest to track when it is from one country to another because it must be checked, and often recorded, at Customs checkpoints. Why do people trade wildlife? People trade wildlife for cash or exchange it for other useful objects - for example, utensils in exchange for wild animal skins.

For a more detailed list of the various uses of wildlife, visit the TRAFFIC website. What is wildlife trade worth financially? This is a difficult estimate to make. Kids' Planet. WWF - Endangered Species. WWF: Priority & endangered species. In the time is takes you to read this page, one of our planet’s unique species will become extinct. 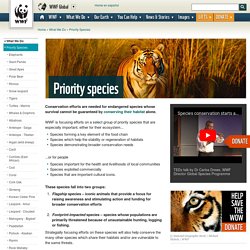 By this time tomorrow, a further 150–200 will have disappeared forever. And by this time next year, over 50,000 more. This alarming rate of extinction is 100-1,000 times, and perhaps even 11,000 times, greater than the expected natural rate. One in four of the world’s mammals are now threatened with extinction in the near future. So are one in eight birds, one in five sharks, one in four coniferous trees, and one in three amphibians. By and large, the cause of this decline is human activities. Habitat loss Unsustainable trade Bycatch Climate change Invasive species Pollution Human-animal conflict Find out more... Time: Animals Under Siege. MNN. CBBC: Endangered animals. Time: The New Age of Extinction. There are at least 8 million unique species of life on the planet, if not far more, and you could be forgiven for believing that all of them can be found in Andasibe. 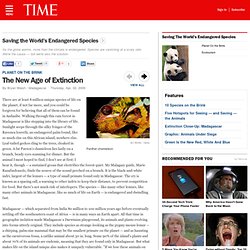 Walking through this rain forest in Madagascar is like stepping into the library of life. Sunlight seeps through the silky fringes of the Ravenea louvelii, an endangered palm found, like so much else on this African island, nowhere else. Leaf-tailed geckos cling to the trees, cloaked in green. A fat Parson's chameleon lies lazily on a branch, beady eyes scanning for dinner. But the animal I most hoped to find, I don't see at first; I hear it, though — a sustained groan that electrifies the forest quiet. Madagascar — which separated from India 80 million to 100 million years ago before eventually settling off the southeastern coast of Africa — is in many ways an Earth apart. That loss seems likelier than ever because the animals are under threat as never before. Endangered Specie.com. Rainforest Action Network. Bagheera. Earth's Endangered Creatures. National Geographic: Endangered species. An endangered species is a type of organism that is threatened by extinction. 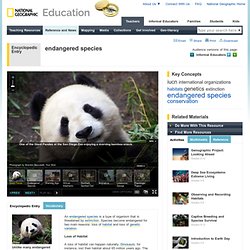 Species become endangered for two main reasons: loss of habitat and loss of genetic variation. Loss of Habitat A loss of habitat can happen naturally. Dinosaurs, for instance, lost their habitat about 65 million years ago. The hot, dry climate of the Cretaceous period changed very quickly, most likely because of an asteroid striking the Earth. Human activity can also contribute to a loss of habitat. Development can eliminate habitat and native species directly.