Reading Pathways: Anthony Horowitz. As a murder mystery aficionado, I’m always on the look out for a clever, well-written murder mystery. 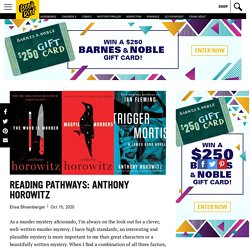 I have high standards; an interesting and plausible mystery is more important to me than great characters or a beautifully written mystery. Feedly – Keep up with the topics and trends you care about. V.E. 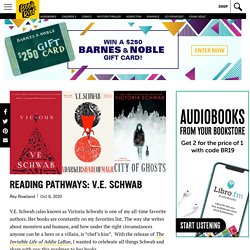 Schwab (also known as Victoria Schwab) is one of my all-time favorite authors. Her books are constantly on my favorites list. The way she writes about monsters and humans, and how under the right circumstances anyone can be a hero or a villain, is *chef’s kiss*. With the release of The Invisible Life of Addie LaRue, I wanted to celebrate all things Schwab and share with you this roadmap to her books. If you like nuanced characters that push the boundaries between good and evil, then her books are for you. Reading Pathways: Susan Elizabeth Phillips. When it comes to contemporary romance, I’ve always considered the two masters to be Nora Roberts and Susan Elizabeth Phillips. 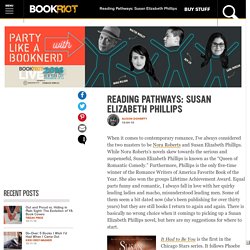 While Nora Roberts’s novels skew towards the serious and suspenseful, Susan Elizabeth Phillips is known as the “Queen of Romantic Comedy.” Furthermore, Phillips is the only five-time winner of the Romance Writers of America Favorite Book of the Year. She also won the groups Lifetime Achievement Award. Equal parts funny and romantic, I always fall in love with her quirky leading ladies and macho, misunderstood leading men.

Reading Pathways: David Sedaris. The first thing you need to know about me is that I’m VERY particular when it comes to humor, to the point that I sometimes tell people I don’t like comedy at all to avoid conversations about why I don’t like this or haven’t seen/read that. 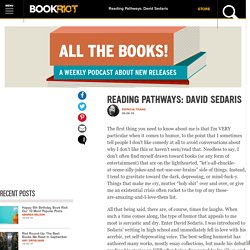 Needless to say, I don’t often find myself drawn toward books (or any form of entertainment) that are on the lighthearted, “let’s-all-chuckle-at-some-silly-jokes-and-not-use-our-brains” side of things. Instead, I tend to gravitate toward the dark, depressing, or mind-fuck-y. Reading Pathways: Where To Start With Agatha Christie. The name Agatha Christie is synonymous with mystery, and it’s no wonder: she’s the best-selling novelist of all time, the first person to win Mystery Writers of America’s Grand Master Award, the world’s most translated novelist, and her play The Mousetrap holds the record for longest initial run. 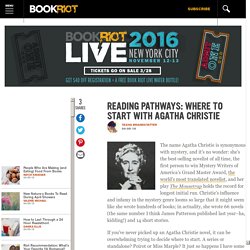 Christie’s influence and infamy in the mystery genre looms so large that it might seem like she wrote hundreds of books; in actuality, she wrote 66 novels (the same number I think James Patterson published last year–ha, kidding!) And 14 short stories. If you’ve never picked up an Agatha Christie novel, it can be overwhelming trying to decide where to start. Reading Pathways: Edgar Allan Poe. Edgar Allan Poe (1809-1849) has long been hailed as the creator of the detective fiction genre and celebrated for his macabre contributions to literary Romanticism. 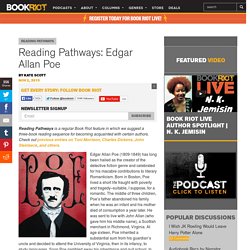 Born in Boston, Poe lived a short life fraught with poverty and tragedy–suitable, I suppose, for a romantic. The middle of three children, Poe’s father abandoned his family when he was an infant and his mother died of consumption a year later. He was sent to live with John Allan (who gave him his middle name), a Scottish merchant in Richmond, Virginia. At age sixteen, Poe inherited a substantial sum from his guardian’s uncle and decided to attend the University of Virginia, then in its infancy, to study languages.

Soon Poe gambled away his inheritance and quit school. Reading Pathways: Graham Greene. You know how you can be a reader your whole life, but never stumble onto one of the greats for years? 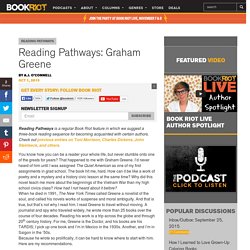 That happened to me with Graham Greene. I’d never heard of him until I was assigned The Quiet American as one of my first assignments in grad school. The book hit me, hard. Reading Pathways: Chuck Palahniuk. If you bring up Palahniuk with a group of readers, there’s one guarantee: you won’t get any tepid reactions. 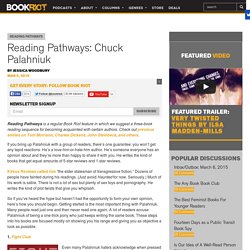 He’s a love-him-or-hate-him author. He’s someone everyone has an opinion about and they’re more than happy to share it with you. He writes the kind of books that get equal amounts of 5-star reviews and 1-star reviews. Kirkus Reviews called him “the elder statesman of transgressive fiction.” Dozens of people have fainted during his readings. So if you’ve heard the hype but haven’t had the opportunity to form your own opinion, here’s how you should begin.

Where to Start With Edith Wharton. Reading Pathways: Stephen King. When it comes to Stephen King, you either start early in life or late. 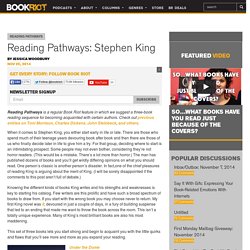 There are those who spend much of their teenage years devouring book after book and then there are those of us who finally decide later in life to give him a try. For that group, deciding where to start is an intimidating prospect. Some people may not even bother, considering they’re not horror readers. (This would be a mistake. Reading Pathway: The Extraordinary Isabel Allende. In addition to being a beloved author of over 20 fiction, nonfiction and YA books (and one of my all time favorites) Isabel Allende will be receiving the Presidential Medal of Freedom from President Obama on November 24th. 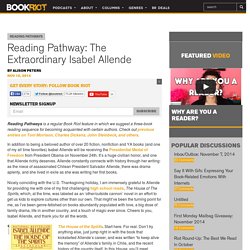 It’s a huge civilian honor, and one that Allende richly deserves. Allende constantly connects with history through her writing: as the niece of assassinated Chilean President Salvador Allende, there was drama aplenty, and she lived in exile as she was writing her first books. Nicely coinciding with the U.S. Thanksgiving holiday, I am immensely grateful to Allende for providing me with one of my first challenging high school reads, The House of The Spirits, which, at the time, was labeled as an ‘other/outside cannon’ novel in an effort to get us kids to explore cultures other than our own.

The House of the Spirits. Paula. Reading Pathways: Charles Dickens. Reading Pathways: John Steinbeck. Of Mice and Men and The Grapes of Wrath being as commonplace as they are in the respective book-bags of high school freshmen and seniors, a post listing the three “pathways” into the labyrinth of greater Steinbeck-dom might not seem like the most obvious one. The first thing to know about Steinbeck is that he was incredibly prolific, with sixteen novels to his credit, many of them quite long and delicately structured.

The other thing I like to say (or to claim more accurately) is that unlike most authors of upwards of ten novels, nearly all of Steinbeck’s sixteen are brilliant, though only a few are widely read. Cannery Row I will only list one that is a common favorite, because it is so dear to me. I discovered Steinbeck not in a classroom but on a family trip through the Salinas Valley, the famed Central California setting that takes on a near mythic quality in most of his work. Reading Pathways: Haruki Murakami. Reading Pathways: John Irving. Reading Pathways is a regular Book Riot feature in which we suggest a three-book reading sequence for becoming acquainted with certain authors.

Check out previous entries on Toni Morrison, Charles Dickens, John Steinbeck, and David Foster Wallace. If you have an author you’d like us to feature here, write us at community (at) bookriot (dot) com. There are some authors that have such distinctive hallmarks in their writing that they stray perilously close to being one-note writers. John Irving, if he were any less of a skilled technician, would easily become one of those authors. READING PATHWAYS: Gabriel Garcia Marquez. In some parts of the world, readers are so familiar, so comfortable with the work of Gabriel Garcia Marquez that they feel as though they know him.

They refer to him affectionately as “Gabo.” They talk about his characters as if they are old friends, and they refer to Macondo (the fictional setting of his most famous novel One Hundred Years of Solitude) as a real place. Gabo is considered required reading. There are certain circles in the US where he is just as well known, though the attitude toward him and his work is…different. There seem to be two camps. 1. This novella, published in 2004, is the most recent work of fiction from Garcia Marquez, though reports (from October 2010) indicate that he has a new novel in the works. 2. This beautiful novel was, unfortunately, adapted into a not-so beautiful movie in 2007. Reading Pathways: E.M. Forster. Reading Pathways is a regular Book Riot feature in which we suggest a three-book reading sequence for becoming acquainted with certain authors.

Enjoy our highlight reel, and we’ll be back with new stuff on Monday, January 6th. This post originally ran October 10, 2013. Reading Pathway: C.S. LEWIS. C.S. Lewis (1898-1963) was one of the greatest authors and apologists of the twentieth century. He was a paradoxical man–intensely private and world famous, a family man and confirmed bachelor until later in life, and a staunch atheist who became a reluctant evangelist. Reading Pathways: Nick Hornby.