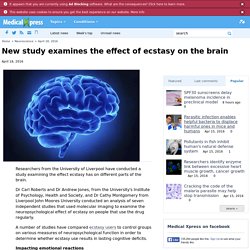 Dr Carl Roberts and Dr Andrew Jones, from the University's Institute of Psychology, Health and Society, and Dr Cathy Montgomery from Liverpool John Moores University conducted an analysis of seven independent studies that used molecular imaging to examine the neuropsychological effect of ecstasy on people that use the drug regularly. A number of studies have compared ecstasy users to control groups on various measures of neuropsychological function in order to determine whether ecstasy use results in lasting cognitive deficits.

Impacting emotional reactions It is common, however, for ecstasy users to use other drugs alongside the substance, and therefore the Liverpool team aimed to discover whether this had any bearing on the impact of the drug. The Disturbing Truth About How Ecstasy Affects the Brain. Donald Trump faced some of the toughest attacks — and questions — of his career as Republican presidential frontrunner Thursday, defending his record to opponents and moderators both in the cycle's eleventh GOP debate. 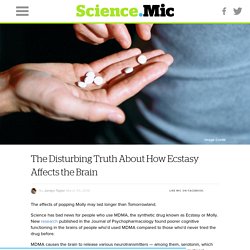 The candidates came to Detroit ready to rumble: Trump arrived with a bevy of Super Tuesday wins under his belt, but also under heavy fire from 2012 GOP nominee Mitt Romney, who called him a phony and a danger to the country in a scathing morning speech in Utah. Ted Cruz and Marco Rubio stayed on his case throughout the two-hour dogfight, taking turns attacking Trump for everything from his penchant for personal insults to his policies and record on immigration and job creation.

John Kasich, the fourth man on the stage given Ben Carson's decision to bow out of the Fox News Channel showdown, tried to stay somewhat above the fray, looking ahead to the coming contests in his home state of Ohio and in Michigan. We kept track of the debate's most significant moments below. 'Blue ghost' ecstasy caused William McLaughlin's seizure and death, says coroner.

A man who died after suffering a seizure in hospital was killed by a potentially deadly form of the drug ecstasy known as blue ghost, an inquest found yesterday. 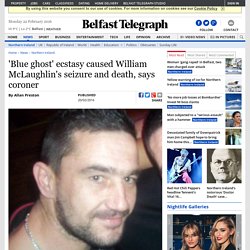 William Daniel McLaughlin (35) took an unknown number of the pills at a pub in Omagh in September last year. He passed away the following morning at South West Acute Hospital. At Laganside House in Belfast yesterday, coroner Suzanne Anderson said she was satisfied the death was accidental and that a post-mortem had shown McLaughlin died "due to poisoning by MDMA, known as ecstasy". Three witnesses - Mr McLaughlin's father Liam, his brother Gavin, and friend Tommy Moore - gave evidence. 'Bad Ecstasy' Rumors Are B.S.; Even Pure Molly Kills. Information from two rave-death coroner's reports we received today has been added to the bottom. 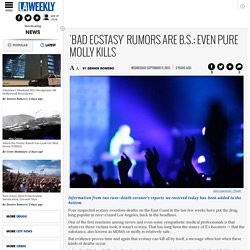 Four suspected ecstasy overdose deaths on the East Coast in the last few weeks have put the drug, long popular in rave-crazed Los Angeles, back in the headlines. Magneticmag. Mother of MDMA death teenager took his friends to hospital bed. The mother of a teenager who died after it is believed he took MDMA at Hogmanay brought his friends to see him in his hospital bed to warn them of the dangers of drugs. 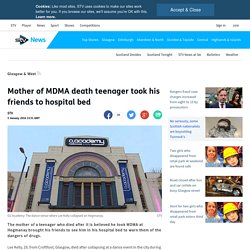 Lee Kelly, 19, from Croftfoot, Glasgow, died after collapsing at a dance event in the city during the New Year celebrations. The teenager was found unconscious at 4am on January 1 at the O2 Academy in Eglinton Street before being taken to Glasgow Royal Infirmary where he died two days later. His mother, Vivien, 46, told STV News some of his friends came to the hospital and she took them to his bed to warn them about what drugs could do to someone. Your Brain On MDMA. MDMA causes death of British DJ Ben Rees in Berlin. A young British DJ died in Berlin after being poisoned by drugs. 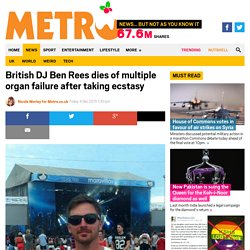 Ben Rees, 23, was in the German capital for a clubbing weekend away with six friends when he took the drug on a night out. University Students’ Union rep Ben died from multiple organ failure. It was caused by MDMA toxicity, the inquest heard. Student Ben Stollery killed himself due to MDMA comedown and depression. A bright college student killed himself due to depression caused by an MDMA comedown after taking the drug the previous Friday. 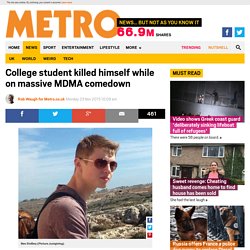 Ben Stollery, 18, is thought to have taken the Ecstasy power MDMA during a Friday night out with friends. Here Are Some MDMA Safety Tips That Could Save Your Life. Between Hard Summer, Electric Daisy Carnival, Coachella, and other major electronic music festival throughout the year, MDMA and other drugs follow them and take many lives in their wake. 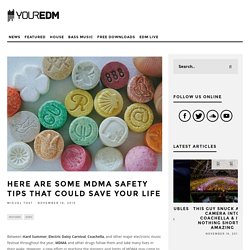 However, a new effort in teaching the dangers and limits of MDMA may come to save people looking to have a good time. Janine Jordan, who is the founder and chairwoman of Electronic Music Alliance has teamed up with the Drug Policy Alliance in order to compile a set of frequently asked questions with answers that aim to educate on the pros and cons of taking MDMA. What is the different between Ecstasy, Molly and MDMA? MDMA is the proper scientific term for the drug, and is short for for 3,4-methylenedioxy-methamphetamine. 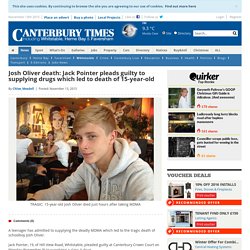 Jack Pointer, 19, of Hill View Road, Whitstable, pleaded guilty at Canterbury Crown Court on Monday (November 9) to supplying a class A drug. Please Like Me sneak peek: Josh and friends try MDMA. Posted November 6 2015 — 10:00 AM EST A glassful of Riesling makes the medicine go down? 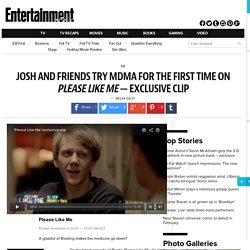 Related On the latest episode of Pivot’s Please Like Me, it’s time for a little bro-bonding between Josh, Arnold, and Tom as the guys experiment with MDMA for the first time. Please Like Me sneak peek: Josh and friends try MDMA. This Is What An MDMA Assisted Therapy Session Looks Like. Below is a clip that recently aired on CBS television about a woman named Rachel Hope, who used MDMA-Assisted psychotherapy in a MAPS study to help overcome treatment-resistant PTSD. On the show, she describes how receiving MDMA as an adjunct to psychotherapy has completely eradicated her need for medication. She also went on to speak about the lasting benefits that the treatment has brought into her life, and even shares one of her MDMA-assisted psychotherapy sessions to illustrate her PTSD recovery process. Current ‘psychedelic’ therapy research continues to gain more ground, and this is only within the past few years.

For example, a study conducted two years ago concluded that LSD-assisted psychotherapy is effective in easing anxiety in dying patients. The double-blind, placebo-controlled study was sponsored by MAPS and conducted by Swiss psychiatrist Peter Gasser and his colleagues. Prominent CNN Reporter Admits To Raving & Taking MDMA During The '90s [Video] Here’s a headline you probably weren’t expecting. It’s no secret respected figures had their fun while they were young, but who knew a prominent CNN journalist partook in the ’90s rave and drug culture? Lisa Ling, the hugely influential journalist who hosts the This Is Life With Lisa Ling show on CNN, uploaded an extensive essay detailing her early days as a “’90s rave queen.” Prefacing her upcoming episode of This Is Life featuring the drug use at American EDM festival Mysteryland, Ling’s essay reveals her early experiences attending underground raves and clubs. While Ling powered through school and internships, she experimented with taking MDMA during late-night raves.

Despite her apparent nostalgia of writing about the ’90s rave scene, Ling admits that not all of her MDMA experiences were positive, and warns of the dangers in taking the drug without being aware of its risks. MDMA Molly Ecstacy. Family of teen who suffered crippling drug overdose posts new pictures showing her amazing fightback. MDMA Psychotherapy Could Be Legal In Just Five Years. Mdma. DanDrug2. DanDrug1. Dailynexus. Health & Wellness >> Science & Tech In the past few years, the rate of people in the United States using some form of methylenedioxymethamphetamine (MDMA) — better known as Ecstasy or Molly — has skyrocketed.

Psychiatrists have begun to examine the psychotherapeutic effects of MDMA in regard to social interaction for a greater understanding of the positive and negative effects of the drug. The research conducted increases our understanding on how MDMA affects emotional and cognitive processing skills in users, in addition to its prescribed therapeutic usage for specific disorders. MDMA is a psychoactive drug rapidly absorbed by the body which increases heart rate and blood pressure, giving individuals a feeling of euphoria and energy when ingested at the right dosage. This is caused by increased dopamine and norepinephrine neurotransmitter levels. Boulder study uses MDMA, therapy to treat PTSD sufferers. Medical researchers in Boulder had an overflowing wait list for a study that combines the psychoactive drug MDMA with therapy to treat post-traumatic stress disorder. "People with PTSD are suffering every single day, and so many people are taking their own lives," said the study's principal investigator, Marcela Ot'alora.

The study focuses on participants who have tried multiple forms of therapy and medications to combat their trauma and have not seen results, said Will Van Derveer, one of the lead researchers in the clinical trial. This is your brain on molly. You’re dancing, flashing lights everywhere. The music is thumping. You’re having a great time. And then you drop some molly, and the party just gets better. You start to feel goooood, like nothing in the world can get you down. You have more energy, and your inhibitions fade away. Why the Party Drug Molly Isn’t What You Think It Is. A Little 'Molly' and then 'She Was Gone' - Health & Science. 16-Year-Old Posts Shocking Warning Video After Emerging From MDMA Coma.

Advertisement - Continue Reading Below. Mdma and the Electronic Woodstock. Scientific research into psychedelics runs an interesting current alongside the social environment that experiments with them. Not Your Stereotypical Psychedelic Drug User. Most people probably have a particular image of what a self-proclaimed psychedelic drug user looks like. Whatever that may be, Rachel Hope, most likely doesn’t fit that portrait. Calls to legalise pill testing services for illegal drugs. Last updated 13:04, September 29 2015 The lethal chemical PMA, also known as "Dr Death", has been detected in "Green Apple" Ecstasy pills sold in Wellington, sparking calls for pill testing services to be legalised. The contamination of illegal Ecstasy pills with toxic, psychoactive chemicals has sparked calls for the legalisation of pill testing services. Mum speaks out after teenage girl left disabled after taking MDMA. This shocking image of Amy Thomson, waving limply from her wheelchair, shows the horrific damage just one pill of ecstasy can cause.

Inquests into ‘Superman’ pill deaths in Ipswich to resume on September 22 - News. 16:57 17 September 2015. Ecstasy left a Glasgow teen wheelchair with slurred speech after a coma. Amy Thomson, 16, collapsed at 'ecstasy party' at a Glasgow house in JuneShe was left in a critical condition and spent one month on a life support Her family have released video which shows how far schoolgirl has comeIt also shows the devastating effect the 'tiny pill' had on her brain and body By Steph Cockroft for MailOnline Published: 08:08 GMT, 10 September 2015 | Updated: 16:25 GMT, 10 September 2015. Popping at a music festival this summer? Keep in mind most ecstasy is far from pure MDMA. With FVDED taking over Holland Park in Surrey this weekend (July 3 and 4), the summer festival season has arrived in B.C.

Following FVDED are the Pemberton Music Festival, July 16 to 19, and then the Squamish Valley Music Festival, August 7 to 9. Why MDMA May One Day Be Used In Couples Therapy. Britons taking more MDMA than any other country — RT UK. College sophomore from Va. dies after taking drug known as ‘Molly’ Flakka: Rampant designer drug unleashes ranting, raving, rage. Psychedelic Drugs ‘Safe as Riding a Bike or Playing Soccer’ Young minds and ecstasy a harmful mix. Criminal Minds. College Kids Are Unknowingly Rolling on Bath Salts. DEA Approves Study Of Psychedelic Drug MDMA In Treatment Of Seriously Ill Patients. Electric Zoo. Man who sold deadly MDMA at Electric Zoo fest avoids jail. Norwegian Researchers Are Crowdfunding to Make Psychedelics and MDMA Free for Global Medical Use. What’s Really in Street-Bought Molly? How Molly Works in the Brain. Father of teen who overdosed on Molly speaks to students about its dangers.