Teens: This is how social media affects your brain — Prevent Child Abuse Delaware. CNN | By Susie East August 1, 2016 - Whether you're on Facebook, Instagram, Snapchat, What's App or Twitter, the way you communicate with friends today is changing. 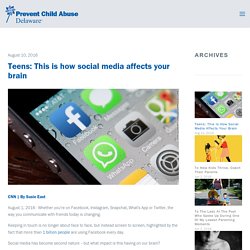 Keeping in touch is no longer about face to face, but instead screen to screen, highlighted by the fact that more than 1 billion people are using Facebook every day. Social media has become second nature -- but what impact is this having on our brain? Reward circuitry In a recent study, researchers at the UCLA brain mapping center used an fMRI scanner to image the brains of 32 teenagers as they used a bespoke social media app resembling Instagram. "When teens learn that their own pictures have supposedly received a lot of likes, they show significantly greater activation in parts of the brain's reward circuitry," says lead author Lauren Sherman. The teenagers were shown more than 140 images where 'likes' were believed to from their peers, but were in fact assigned by the research team. Peer influence Social learning. Adult drinking habits in Great Britain - Office for National Statistics.

28.9 million people report that they had drunk alcohol in the week before interview. 2.5 million people drink more than 14 units of alcohol on their heaviest drinking day. 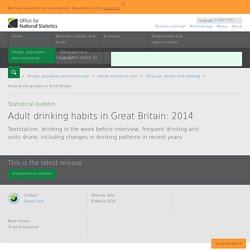 Almost 1 in 5 higher earners drink alcohol on at least 5 days a week. Young people are less likely to have consumed alcohol in the last week than those who are older. A higher percentage of drinkers in Wales and Scotland drink over the recommended weekly amount in one day. Wine is the most popular choice of alcohol. Back to table of contents In Great Britain in 2014, there were 28.9 million people who reported that they drank alcohol in the week before being interviewed for the Opinions and Lifestyle Survey. Focusing on those who drank alcohol, 12.9 million (45%) drank more than 4.67 units (around 2 pints of 4% beer or 2 medium (175 millilitre) glasses of 13% wine) on their heaviest drinking day. Figure 1: Percentage who drank each unit group on heaviest drinking day by age group, 2014 Great Britain. 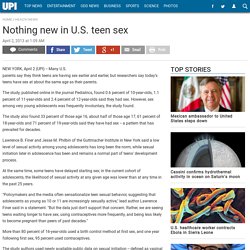 The study, published online in the journal Pediatrics, found 0.6 percent of 10-year-olds, 1.1 percent of 11-year-olds and 2.4 percent of 12-year-olds said they had sex. However, sex among very young adolescents was frequently involuntary, the study found. The study also found 33 percent of those age 16, about half of those age 17, 61 percent of 18-year-olds and 71 percent of 19-year-olds said they have had sex -- a pattern that has prevailed for decades. Lawrence B. Finer and Jesse M. At the same time, some teens have delayed starting sex; in the current cohort of adolescents, the likelihood of sexual activity at any given age was lower than at any time in the past 25 years. © 2013 United Press International, Inc. American Teens' Sexual and Reproductive Health. May 2014 •Fewer than 2% of adolescents have had sex by the time they reach their 12th birthday.

But adolescence is a time of rapid change. Only 16% of teens have had sex by age 15, compared with one-third of those aged 16, nearly half (48%) of those aged 17, 61% of 18-year-olds and 71% of 19-year-olds.[1] There is little difference by gender in the timing of first sex. •On average, young people have sex for the first time at about age 17, [2] but they do not marry until their mid-20s.[3] This means that young adults may be at increased risk for unintended pregnancy and STIs for nearly a decade or longer. Welcome to FCD, Non-Profit Substance Abuse Prevention Organization. ESPAD. Welcome to the MTF Website. Global status report on alcohol and health 2014. FCD Database Key Findings 2009 2015. Monitoring the Future. 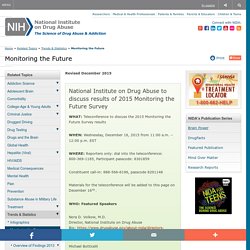 EST WHERE: Reporters only: dial into the teleconference: 800-369-1185, Participant passcode: 8301859 Constituent call-in: 888-566-6196, passcode 8201148 Materials for the teleconference will be added to this page on December 16th. WHO: Featured Speakers Nora D. Michael Botticelli Director, Office of National Drug Control Policy Bio: Lloyd D. Richard A. If you wish to set up an interview with one of the teleconference speakers, please contact the following: Since 1975 the MTF survey has measured drug, alcohol, and cigarette use and related attitudes among adolescent students nationwide. Results from the Survey are released each fall.