How to Be Way More Productive. Wake Up With More Energy Many people feel tired in the morning not because they didn't sleep enough but because they have low blood sugar. 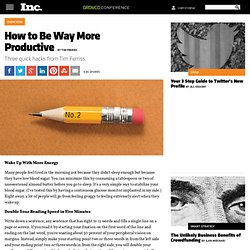 You can minimize this by consuming a tablespoon or two of unsweetened almond butter before you go to sleep. It's a very simple way to stabilize your blood sugar. (I've tested this by having a continuous glucose monitor implanted in my side.) Right away, a lot of people will go from feeling groggy to feeling extremely alert when they wake up. Double Your Reading Speed in Five Minutes Write down a sentence, any sentence that has eight to 12 words and fills a single line on a page or screen. Clear Your Inbox in Half the Time The only consistent way to get to inbox zero is to respond to fewer emails, because each response breeds more email.

The first is five.sentenc.es, which gives you a footer that says, "Why is this email five sentences or less? " Boomerang is an extension for Gmail. As told to Inc. editor-at-large Tom Foster. How the Rich Get Rich. John D. 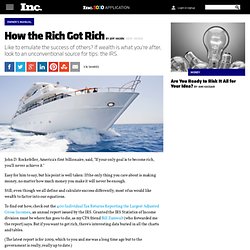 Rockefeller, America's first billionaire, said, "If your only goal is to become rich, you'll never achieve it. " Easy for him to say, but his point is well taken: If the only thing you care about is making money, no matter how much money you make it will never be enough. Still, even though we all define and calculate success differently, most of us would like wealth to factor into our equations. To find out how, check out the 400 Individual Tax Returns Reporting the Largest Adjusted Gross Incomes, an annual report issued by the IRS. Granted the IRS Statistics of Income division must be where fun goes to die, as my CPA friend Bill Zumwalt (who forwarded me the report) says. (The latest report is for 2009, which to you and me was a long time ago but to the government is really, really up to date.)

In 2009 it took $77.4 million in adjusted gross income to make the top 400. Where it gets interesting is how the top 400 made their money: Obvious conclusions: Business Plans Are a Waste of Time. Here's What to Do Instead. If you're taking time to carefully perfect a business plan to help ensure your company's model is sound and that it will be a success--stop. 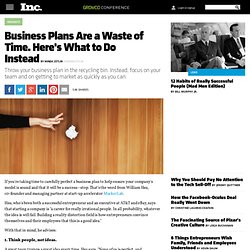 That's the word from William Hsu, c0-founder and managing partner at start-up accelerator MuckerLab. Hsu, who's been both a successful entrepreneur and an executive at AT&T and eBay, says that starting a company is "a career for really irrational people. In all probability, whatever the idea is will fail. Building a reality distortion field is how entrepreneurs convince themselves and their employees that this is a good idea. " With that in mind, he advises: 1. A great team trumps a great idea every time, Hsu says. In either case, having great team members can fill in any areas where the entrepreneur lacks strength, he says. 2.

"Whatever hypothesis you have about the market, it's probably wrong by definition," he says. Then, he says, pivot and reconfigure on the basis of that market response. 3. Does that mean you should never look ahead? 10 Ways You Should Never Describe Yourself. Picture this: You meet someone new. 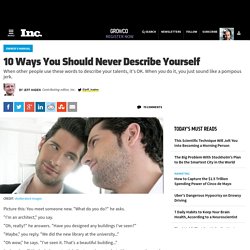 "What do you do? " he asks. "I'm an architect," you say. "Oh, really? " Why Face-To-Face Meetings Are Overrated. You know the feeling. 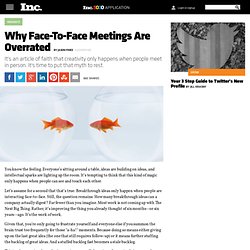 Everyone’s sitting around a table, ideas are building on ideas, and intellectual sparks are lighting up the room. It’s tempting to think that this kind of magic only happens when people can see and touch each other. Let’s assume for a second that that’s true: Breakthrough ideas only happen when people are interacting face-to-face. Still, the question remains: How many breakthrough ideas can a company actually digest? Far fewer than you imagine. Given that, you’re only going to frustrate yourself and everyone else if you summon the brain trust too frequently for those "a-ha! " This is why at 37signals we don’t meet in person all that often. But what about those spur-of-the-moment rays of brilliance? By rationing in-person meetings, their stature is elevated to that of a rare treat.

Reprinted from the book Remote: Office Not Required by Jason Fried and David Heinemeier Hansson. How to Be Happier at Work: 10 Tips. Happiness--in your business life and your personal life--is often a matter of subtraction, not addition. 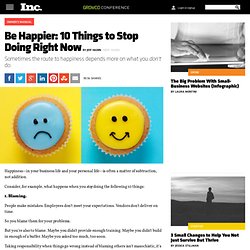 Consider, for example, what happens when you stop doing the following 10 things: 6 Habits of Remarkably Likable People. When you meet someone, after, "What do you do? 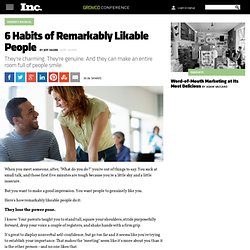 " you're out of things to say. You suck at small talk, and those first five minutes are tough because you're a little shy and a little insecure.