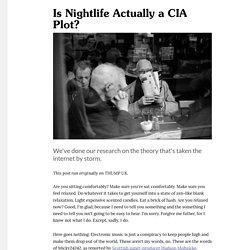 Make sure you're sat comfortably. Make sure you feel relaxed. Do whatever it takes to get yourself into a state of zen-like blank relaxation. Light expensive scented candles. Eat a brick of hash. Here goes nothing: Electronic music is just a conspiracy to keep people high and make them drop out of the world. Sadly reader, through intense and potentially dangerous research, this truth is now un-ignorable. Yes, you read that right. Scoff all you like, scoff yourself silly, scoff so hard you inadvertently choke on your own tonsils, and see if I offer you mouth to mouth. In the early 1960s, operatives working for the CIA met with their English counterparts from MI6 at a truck stop in central Belize, around a hundred miles away from the capital city, Belmopan. The man we believe to be "Derek Perrin" (via Flickr) The infiltration process was near total. It wasn't until the mid-70s that things really started to take off.

Disneyland: 60 things you might not know about the Magic Kingdom. A TV show named "Gunsmoke" made its debut, and another named "Make Room for Daddy" won two Emmys. 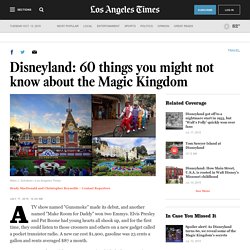 Elvis Presley and Pat Boone had young hearts all shook up, and for the first time, they could listen to those crooners and others on a new gadget called a pocket transistor radio. A new car cost $1,900, gasoline was 23 cents a gallon and rents averaged $87 a month. It was 1955. On July 17 of that year — a year in which the last occupying troops left Austria and the Brooklyn Dodgers won the World Series — Disneyland opened its doors. If the first day was any indicator of its future, we might have expected Walt Disney's amusement park to fade into oblivion, much like Georgia Gibbs' No. 1 Billboard hit "Dance With Me Henry" did. The chaos of Disneyland's debut played out in front of a national television audience, and predictions of epic failure abounded. Sixty years later, we know how wrong those naysayers were. DISNEYLAND AT 60: How 'The Happiest Place on Earth' is celebrating 1. 2. 3. Phill Jennings. Official Website of High Focus Records » Rag N Bone Man.

Rory Graham aka Rag ‘N’ Bone man is a soul and blues singer deeply rooted in the annals of the past but positioned firmly in the present and future of the underground UK music scene. 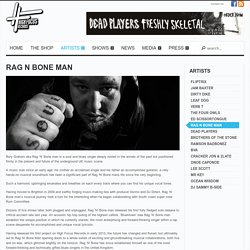 A music man since an early age; his mother an acclaimed singer and his father an accomplished guitarist, a very hands-on musical soundtrack has been a significant part of Rag ‘N’ Bone mans life since the very beginning. Such a harmonic upbringing emanates and breathes on each every track where you can find his unique vocal tones. Having moved to Brighton in 2009 and swiftly forging music-making ties with producer Gizmo and DJ Direct, Rag ‘N’ Bone man’s musical journey took a turn for the interesting when he began collaborating with South coast super crew Rum Committee. Dozens of live shows later, both plugged and unplugged, Rag ‘N’ Bone man released his first fully fledged solo release to critical acclaim late last year. 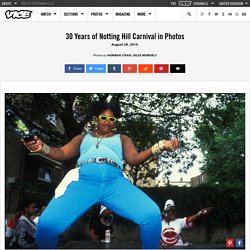 While everyone else was busy drinking rum out the bottle and looking for a place to take a leak, photographers Norman Craig and Giles Moberly were diligently documenting the party on camera. From the Nation of Islam in their sharp suits to girls dressed up as the "Soca Police Force", the photo opportunities were so good that Craig and Moberly kept going back year after year. The result is a slice of West London history. Here are their incredible photos from the last three decades of Carnival.

Our Carnival content is bought to you in partnership with Rinse. The Capital of Cool. 5 Reasons Modern-Day Parenting Is in Crisis, According to a British Nanny  I generally am quite an optimistic person. 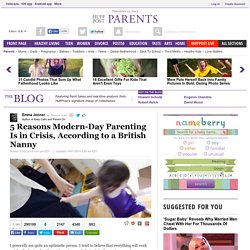 I tend to believe that everything will work out for the best unless the evidence is overwhelmingly to the contrary, and anyone who knows me will tell you that I am not prone to drama. That's why when I say that modern parenting is in serious trouble -- crisis, even -- I hope you'll listen, and listen carefully. I've worked with children and their parents across two continents and two decades, and what I've seen in recent years alarms me.

Here are the greatest problems, as I see them: 1. 2. 3. 4. 5. I fear that if we don't start to correct these five grave parenting mistakes, and soon, the children we are raising will grow up to be entitled, selfish, impatient and rude adults. Watch Emma Jenner on HuffPost Live: Like Us On Facebook | Follow Us On Twitter | Contact HuffPost Parents Also on HuffPost: Close.