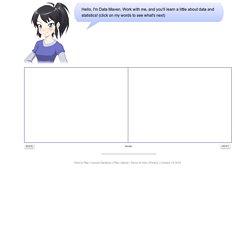 You appear to have Javascript disabled. Data Maven from Crunchzilla uses Javascript. Please enable Javascript if you want to play with Data Maven. Otherwise, Data Maven will not be able to play with you. Hello, I'm Data Maven. How to Play | Lesson Sections | FAQ | About | Terms of Use | Privacy | Contact | © 2015 How to Play Too many people think statistics is either boring or useless. It's more of a game than a tutorial. It's easy to play. 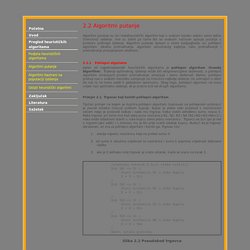 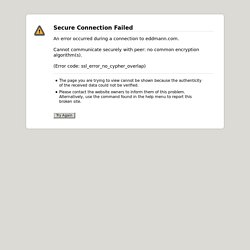 Consisting of vertices (nodes) and the edges (optionally directed/weighted) that connect them, the data-structure is effectively able to represent and solve many problem domains. One of the most popular areas of algorithm design within this space is the problem of checking for the existence or (shortest) path between two or more vertices in the graph. Properties such as edge weighting and direction are two such factors that the algorithm designer can take into consideration. In this post I will be exploring two of the simpler available algorithms, Depth-First and Breath-First search to achieve the goals highlighted below: The Graph So as to clearly discuss each algorithm I have crafted a connected graph with six vertices and six incident edges. Depth-First Search Mark the current vertex as being visited. Connected Component Paths Resources.

Set 7 (The Skyline Problem) The Universe By Numbers - The Physics of the Universe. Some of the numbers, both small and large, that are bandied around in modern physics are very difficult to grasp. 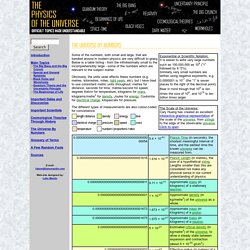 Python tutorial with exercise. 29 January 2014 input strings types int Calibrating the exercises to the audience is going to be a challenging task, so I ask you to bear with me if the exercises are too easy or too hard. 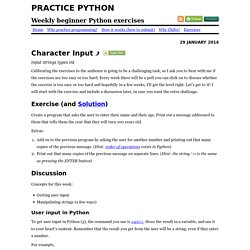 Every week there will be a poll you can click on to discuss whether the exercise is too easy or too hard and hopefully in a few weeks, I’ll get the level right. Python Introduction - Google for Education. Prelude Welcome to Google's Python online tutorial. 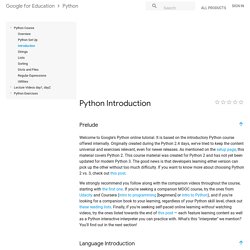 It is based on the introductory Python course offered internally. Originally created during the Python 2.4 days, we've tried to keep the content universal and exercises relevant, even for newer releases. As mentioned on the setup page, this material covers Python 2. While we recommend "avoiding" Python 3 for now, recognize that it is the future, as all new features are only going there. We strongly recommend you follow along with the companion videos throughout the course, starting with the first one. 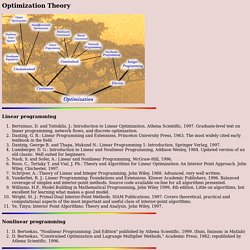 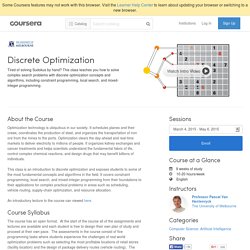 It schedules planes and their crews, coordinates the production of steel, and organizes the transportation of iron ore from the mines to the ports. Optimization clears the day-ahead and real-time markets to deliver electricity to millions of people. It organizes kidney exchanges and cancer treatments and helps scientists understand the fundamental fabric of life, control complex chemical reactions, and design drugs that may benefit billions of individuals. Linear and Discrete Optimization - École Polytechnique Fédérale de Lausanne. About the Course This course serves as an introduction to linear and discrete optimization from the viewpoint of a mathematician or computer scientist. 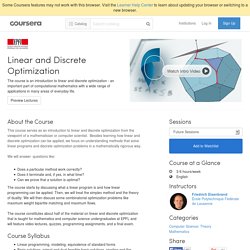 Course Format. Modeling Discrete Optimization - The University of Melbourne. About the Course The world is full of hard discrete optimization problems. 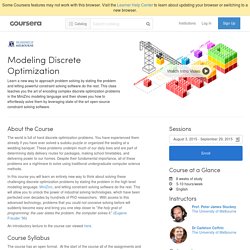 You have experienced them already if you have ever solved a sudoku puzzle or organized the seating at a wedding banquet. These problems underpin much of our daily lives and are part of determining daily delivery routes for packages, making school timetables, and delivering power to our homes. Despite their fundamental importance, all of these problems are a nightmare to solve using traditional undergraduate computer science methods. In this course you will learn an entirely new way to think about solving these challenging discrete optimization problems by stating the problem in the high level modeling language, MiniZinc, and letting constraint solving software do the rest.