Auditory Integration Training by The National Light & Sound Therapy Centre helps in stimulating the brain to work more effectively. Get AIT therapy in London UK for a range of difficulties & disabilities. 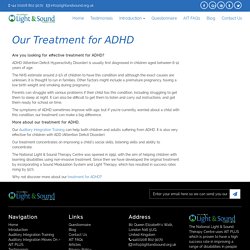 ADHD (Attention Deficit Hyperactivity Disorder) is usually first diagnosed in children aged between 6-12 years of age. The NHS estimate around 2-5% of children to have this condition and although the exact causes are unknown, it is thought to run in families. Other factors might include a premature pregnancy, having a low birth weight and smoking during pregnancy. Parents can struggle with various problems if their child has this condition, including struggling to get them to sleep at night. Therapy for Children & Adults with Autism - Try AIT. Are you looking for therapy for somebody with autism? 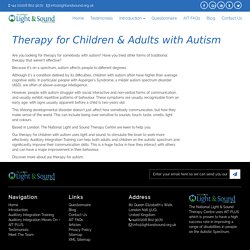 Have you tried other forms of traditional therapy that weren’t effective? Because it’s on a spectrum, autism affects people to different degrees. Although it’s a condition defined by its difficulties, children with autism often have higher than average cognitive skills. In particular, people with Asperger’s Syndrome, a milder autism spectrum disorder (ASD), are often of above-average intelligence. However, people with autism struggle with social interactive and non-verbal forms of communication, and usually exhibit repetitive patterns of behaviour. This lifelong developmental disorder doesn’t just affect how somebody communicates, but how they make sense of the world.

Based in London, The National Light and Sound Therapy Centre are keen to help you. Looking for a Therapy that Helps your Anxiety? Have you tried traditional ‘cures’ for anxiety, but found they haven’t worked? 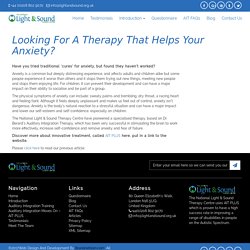 Anxiety is a common but deeply distressing experience, and affects adults and children alike but some people experience it worse than others and it stops them trying out new things, meeting new people and stops them enjoying life. For children, it can prevent their development and can have a major impact on their ability to socialise and be part of a group. The physical symptoms of anxiety can include: sweaty palms and trembling, dry throat, a racing heart and feeling faint. Although it feels deeply unpleasant and makes us feel out of control, anxiety isn’t dangerous. Looking For Innovative Treatment For ADHD? ADHD is a condition that affects around 2-5% of school children, and occurs in people of all intellectual abilities. 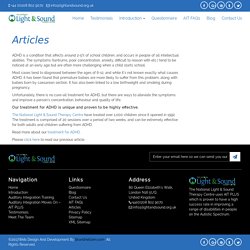 The symptoms (tantrums, poor concentration, anxiety, difficult to reason with etc.) tend to be noticed at an early age but are often more challenging when a child starts school. Most cases tend to diagnosed between the ages of 6-12, and while it’s not known exactly what causes ADHD, it has been found that premature babies are more likely to suffer from this problem, along with babies born by caesarean section. It has also been linked to a low birthweight and smoking during pregnancy. Unfortunately, there is no cure-all treatment for ADHD, but there are ways to alleviate the symptoms and improve a person’s concentration, behaviour and quality of life. AIT, Therapy for Speech, Behavioural & Communication Problems. After many years of working with children on the autistic spectrum it has become clear that Dr. 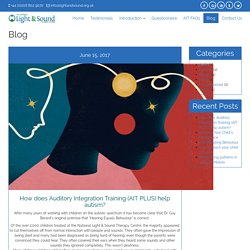 Guy Berard’s original premise that “Hearing Equals Behaviour” is correct. Of the over 2,000 children treated at the National Light & Sound Therapy Centre, the majority appeared to cut themselves off from normal interaction with people and sounds. They often gave the impression of being deaf and many had been diagnosed as being hard of hearing, even though the parents were convinced they could hear. They often covered their ears when they heard some sounds and other sounds they ignored completely. How to deal with Tantrums - The National Light & Sound Therapy Centre. Identify the situations that are likely to set off a major tantrum. 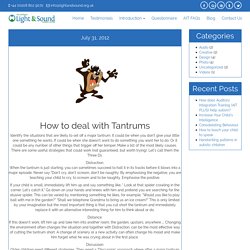 It could be when you don’t give your little one something he wants. If could be when she doesn’t want to do something you want her to do. Or it could be any number of other things that trigger off her temper. Make a list of the most likely causes. There are some useful strategies that could work (not guaranteed, but worth trying). Distraction: When the tantrum is just starting, you can sometimes succeed to halt it in its tracks before it blows into a major episode. If your child is small, immediately lift him up and say something like, “ Look at that spider crawling in the corner. Distance: If this doesn’t work, lift him up and take him into another room, the garden, upstairs, anywhere …. Discussion: Older children need different strategies. Handwriting patterns in Autistic Children - Light & Sound Therapy Centre.

Increase your Child’s Intelligence - National Light & Sound Therapy Centre. Imagine your child’s brain is made up of millions of light bulbs. 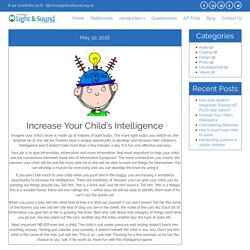 The more light bulbs you switch on, the brighter he or she will be. Parents have a unique opportunity to develop and increase their children’s intelligence and it doesn’t take more than a few minutes a day. It is fun and effective and easy Your job is to give information, information and more information. And most important to help your child see the connections between those bits of information (synapses). If you don’t talk much to your child when you push him in the buggy, you are missing a wonderful opportunity to increase his intelligence. AIT PLUS -Auditory Integration Training, Light Therapy, Sound Modulation System.

AIT PLUS is a combination of three therapies: Auditory Integration Training; Light Therapy; and a Sound Modulation System pioneered by The Light & Sound Therapy Centre. 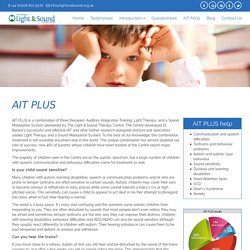 The Centre developed Dr. Berard’s successful and effective AIT and after further research alongside doctors and specialists added Light Therapy and a Sound Modulation System. To the best of our knowledge, this combination treatment is not available anywhere else in the world. This unique combination has almost doubled our rate of success; now 46% of parents whose children have been treated at the Centre report major improvements. Auditory Integration Training - Autistic Spectrum & Other Difficulties.

If you think of how dependent we as humans are on verbal communication, it is easy to comprehend the importance of being able to not only hear properly but to accurately interpret what is heard. 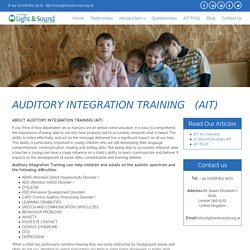 The ability to listen effectively and act on the message delivered has a significant impact on all our lives. This ability is particularly important in young children who are still developing their language comprehension, communication, reading and writing skills.