"Home Sane Home" Parasite, the acclaimed winner of Palme d’Or for best film at the 2019 Cannes Film Festival and Hollywood’s Academy Award for Best Picture, is a black comedy about a poor family living in a cramped, dark, and damp semi-basement apartment in Seoul – the plight of hundreds of thousands financially struggling residents in the city. 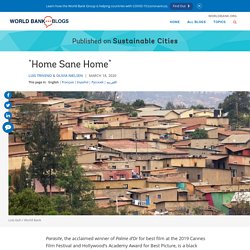 The family cooks up an elaborate, often hilarious scheme to improve their living conditions. Mayhem ensues, and so does housing inequality. But for the billions of people living in similar or worse conditions worldwide, this is no laughing matter. As the world struggles to fight the unprecedented COVID-19 pandemic, over 2 billion people still do not have access to a toilet, and hundreds of millions of people cannot even wash their hands at home. Meanwhile, disasters and climate change are destroying an increasing number of dwellings, leaving an estimated 14 million people homeless each year.

The Housing Crisis is a Construction Crisis. There’s at least one thing many urbanists and Donald Trump appear to agree about: America is indeed stuck in a building crisis. 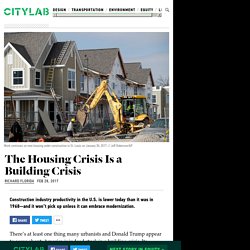 Its infrastructure is dilapidated and failing, and housing prices are surging in a superstar economy in part because we don’t build enough of it. But it is not just sagging federal spending or onerous land use restrictions that are to blame. America’s construction industry face a staggering productivity crisis. And it’s not just a U.S. issue: A report released today by the McKinsey Global Institute concludes that global productivity in the construction industry has stagnated.

Scarce, unaffordable housing is not a local problem in a few places, but is baked into the 21st-century global city. It’s time for cities, nations, and global leaders to start acting like it. From reading the press, you’d think the housing crisis is mainly relevant to superstar cities like New York, London, and San Francisco. But housing is becoming increasingly expensive in a wide range of cities, including Philadelphia and Detroit. Opinion: The business case for housing microfinance.

A safe and stable home is an essential requirement for a decent life. 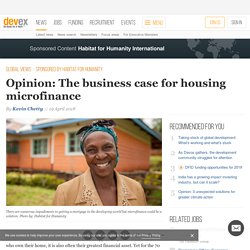 It offers a vital foundation for health, education, and the opportunity to work. For those who own their home, it is also often their greatest financial asset. Yet for the 70 percent of the world’s population with an income of less than $3,000 per year, the options for housing finance remain scarce and largely informal. In the developed world, housing finance is synonymous with mortgage lending. It is a key element of the economy and the banking sector. There are numerous impediments to getting a mortgage in the developing world. Opinion: How to turn housing microfinance mainstream. Across Africa, 85 percent of the population simply don’t have access to the formal financing — credit, savings, or mortgages — that would allow them to build or improve their homes. 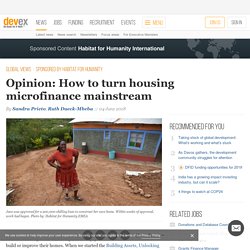 When we started the Building Assets, Unlocking Access project, we were driven by this stark gap in access to housing finance in sub-Saharan Africa and a desire to do something about it. In fact, McKinsey has estimated that the gap in access to housing finance among low-income households, if addressed properly, could create an estimated $200-$250 billion dollars in profits for financial institutions. The initiative, undertaken in Kenya and Uganda by Habitat for Humanity’s Terwilliger Center for Innovation in Shelter and the Mastercard Foundation, offered technical support to financial institutions to develop small, short-term, nonmortgage-backed loans and reflected the regional tradition of gradually building homes, as resources allow. Opinion: The business case for housing microfinance Barriers to expansion.

Too Many Cities Are Growing Out Rather than Up. 3 Reasons That’s a Problem. Imagine Lagos, Nigeria, a city of 22 million. 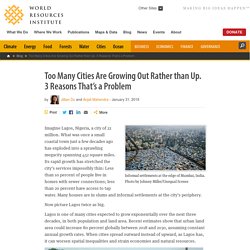 What was once a small coastal town just a few decades ago has exploded into a sprawling megacity spanning 452 square miles. Its rapid growth has stretched the city’s services impossibly thin: Less than 10 percent of people live in homes with sewer connections; less than 20 percent have access to tap water. Many houses are in slums and informal settlements at the city’s periphery. Now picture Lagos twice as big. Lagos is one of many cities expected to grow exponentially over the next three decades, in both population and land area. Lagos is expected to at least double its land area by 2050. In our new World Resources Report paper, Upward and Outward Growth: Managing Urban Expansion for More Equitable Cities in the Global South, we analyzed growth patterns for 499 cities using remote sensing. To embed: 3 Consequences of Unmanaged Urban Expansion Some of the implications of this unmanaged growth include: