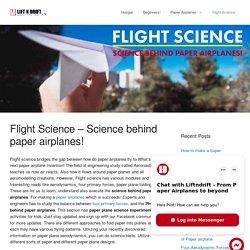 The field of engineering study called Aeronautics teaches us how air reacts. Also how it flows around paper planes and all aeromodelling creations. However, Flight science has various modules and Interesting reads like aerodynamics, four primary forces, paper plane folding. Learn how to make a Zazoom Paper Airplane design from Liftndrift.com! Paper Airplane wings have no curvature shape like Real airplanes. 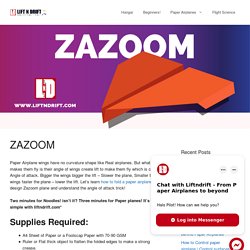 But what makes them fly is their angle of wings create lift to make them fly which is called Angle of attack. Bigger the wings bigger the lift – Slower the plane, Smaller the wings faster the plane – lower the lift. Let’s learn how to fold a paper airplane to design Zazoom plane and understand the angle of attack trick! Two minutes for Noodles! Isn’t it? How to make a Eagle Eye Paper Airplane design! Majority of the Paper airplanes gives a poor performance at their first try, Giving a tight crease and folding firmly makes it perform better. 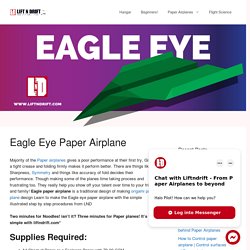 There are things like Sharpness, Symmetry and things like accuracy of fold decides their performance. Though making some of the planes time taking process and frustrating too. They really help you show off your talent over time to your friends and family! Learn how to make Floating eagle paper airplane! Hello Human! 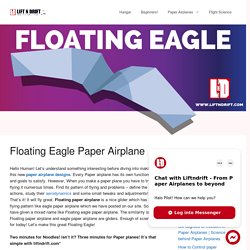 Let’s understand something interesting before diving into making this new paper airplane designs. Every Paper airplane has its own functions and goals to satisfy. However, When you make a paper plane you have to try flying it numerous times. Find its pattern of flying and problems – define the actions, study their aerodynamics and some small tweaks and adjustments! That’s it! Two minutes for Noodles! A4 Sheet of Paper or a Foolscap Paper with 70-90 GSMA kid Friendly scissor if you cannot slit the extras by hand with accuracy.Ruler or Flat thick object to flatten the folded edges to make a strong crease.

Step 1: Cut off one-quarter of the paper’s width.If you don’t know how to measure one-quarter. Step 2: Now, keep the paper in landscape mode over the table or flat floorFold the left-hand corner up to the top right-hand cornerIf you are still confused check Fig.2 Step 3: Learn how to make a Origami paper airplane. Origami is a traditional way of making paper airplanes and the name meaning as it goes like (Ori-gami : Folding-papers). 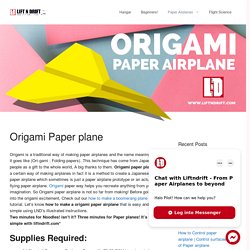 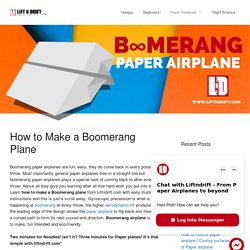 Most importantly general paper airplanes flies in a straight line but boomerang paper airplanes plays a special task of coming back to after every throw. Above all they give you learning after all that hard work you put into it. Learn how to make a Boomerang plane from Liftndrift.com with easy illustrated instructions and this is just a scroll away. Gyroscopic precession is what is happening at boomerang at every throw, the higher aerodynamic lift produced at the leading edge of the design allows the paper airplane to flip back and move in a curved path to form its next course and direction. 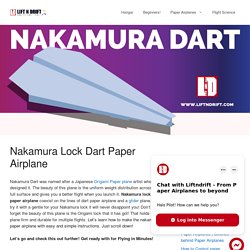 Get ready with for Flying in Minutes! A4 sheet of Paper – 1 No.Plastic (or) Steel Ruler – 1 No. Step 1: Start with an A4 Sheet of paper with 70 – 80 GSMHold it in portrait space and base foldMountain Fold to the centre line without crossing the line on both sidesIf it forms a House like the shape it is absolutely right. Step 2: Valley fold the top sharp edge bottom as shown in Fig. 2Make a firm right fold there Step 3: Learn how to make Easy Freezy paper plane design!

It is not only your Paper airplanes which flutters and flies high in the air, but also your dreams! 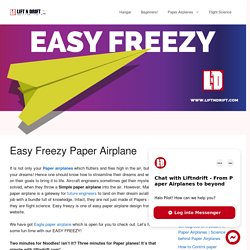 Hence one should know how to streamline their dreams and work on their goals to bring it to life. Aircraft engineers sometimes get their mysteries solved, when they throw a Simple paper airplane into the air. However, Making paper airplane is a gateway for future engineers to land on their dream aviation job with a bundle full of knowledge. Infact, they are not just made of Papers – they are flight science. Learn how to make Dart Paper Airplane design! Rudder or Fins in Paper Airplane assists aircraft to attain a straight flight, Also the holding part of the plane which is called FUSELAGE also helps the plane going straight. 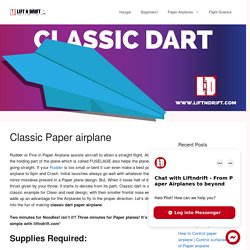 If your Rudder is too small or bent it can even make a best paper airplane to Spin and Crash. Initial launches always go well with whatever the minor mistakes present in a Paper plane design. But, When it loses half of its thrust given by your throw, it starts to deviate from its path. Classic dart is a classic example for Clean and neat design, with their smaller frontal nose weight adds up an advantage for the Airplanes to fly in the proper direction. Learn how to make a Free Glide paper airplane design! Paper planes are basically launched in positive angle upwards, because of the necessity to produce lift while it is pushed in the forward acceleration. 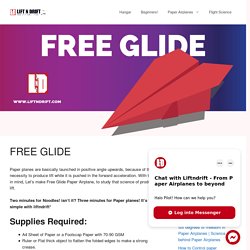 Here is your chance, Learn making the paper airplane for distance with simple and easy illustrated instructions from Liftndrift.com. We not only help you how to make a paper airplane, but we help curious minds with flight science, a new area for scientific nerds to explore. Two minutes for Noodles! A4 Sheet of Paper or a Foolscap Paper with 70-90 GSMA kid Friendly scissor if you cannot slit the extras by hand with accuracy.Ruler or Flat thick object to flatten the folded edges to make a strong crease.

How to build distance paper airplane! This is all about how to fold and make the best paper airplane design, some gentle folds and precision is what you need in the first place. As you are reading this tutorial, you are one of the interested paper plane enthusiast. Statistically the better kind of planes are made of good papers. How to make a paper airplane that flies far and straight! Basically paper plane wings having rectangular shape are meant for slow speeds and they have good gliding capacity. The shorter it gets, the speeder it goes.

It will have better speed, maneuverability and it can be the paper airplane that flies far. However, far flying paper airplanes will need the ability to perform like a dart when you toss them and it should balance itself from the turbulence. In order to know how to make a paper airplane that flies far and straight and fast, you need to understand the wing shape and their durability to withstand in the sturdy wind. How to make your Paper airplane stable with Dihedral and Anhedral angle. For making the aircrafts stable, lifting up the wingtips above the level of where the wings are attached. From Fuselage level to the wingtip there is an increase in the angle is called Dihedral. Though it helps the aircraft from losing stability, the main drawbacks can be the decrease in lift. If the wingtips are above from the fuselage level it is called Positive Dihedral and similarly, if the wingtips are lower than the fuselage level it is Negative dihedral (or) Anhedral.

In this case, of regular failure of your paper airplane “Dihedral” is the easiest and yet simplest adjustment you can make it to fly better. Now, this below picture shows the Back view of a Paper airplane having the Dihedral adjustment (with both wings lifted upside from the flat level) Compare the picture below and above, the angle of both the pictures match. Anhedral is the opposite of Dihedral which has the shape of ‘M’ while holding in the hand and shape of ‘A’ while holding in hands. . © LND 2020. Best paper airplane for distance and speed that anyone can make! Fold n Fly paper airplanes for 6 to 60+ Hey you know what? The design of this paper airplane is what makes it a great flyer. The major advantages of this model is that, it is easy to fold n fly even if you don’t have any course of knowledge in origami.

However, kids of our age not knowing a fact that, planes which they make are indeed Origami paper plane. Learn How to make Wind Fin Paper Airplane Designs! As far as the world’s knowledge paper was first invented by Chinese thousands of years back. Someone back then made his/her very first paper plane. Instead of ending up floating they just landed in the trash box.

Whose mistake is that? The answer is no ones. How to make a Paper Airplane.