LifeInSight BioTherapeutics is a 501(c) (3) non-profit organization that was established to fund collaborative research designed to optimize treatments for mental illness, neurodegenerative diseases, and substance use disorders. For more information visit our website: -

LifeInSight – Mental Health Research Non-Profit. Getting To Know PTSD: What It Means To Live With It. Post Traumatic Stress Disorder, or PTSD, is often caused by an extraordinarily terrifying or traumatic event. 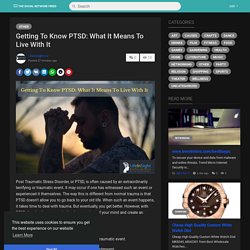 It may occur if one has witnessed such an event or experienced it themselves. The way this is different from normal trauma is that PTSD doesn't allow you to go back to your old life. When such an event happens, it takes time to deal with trauma. But eventually, you get better. However, with PTSD, the shock may seep in the deep crevices of your mind and create an inability to do daily tasks. Why Is Research On Mental Health Important?: lifeinsightusa — LiveJournal. As more people are beginning to initiate conversations and share their experiences with the world, we realize that mental health has played a huge role in their lives and that it's crucial to understand the concept of "mental health," now more than ever. 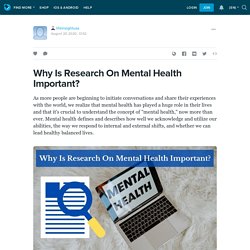 Mental health defines and describes how well we acknowledge and utilize our abilities, the way we respond to internal and external shifts, and whether we can lead healthy balanced lives. The brain is a complex organ that hasn't been fully understood yet. Brain and behavior research foundations contribute heavily to understanding mental health by collaborating with the best academic minds and scientists from all over the world. Addiction Foundation - Cell Phone, meth, Addiction - Experimental Brain Research. “We make a living by what we get, but make a life by what we give.” ~ Winston Churchill Drug Addiction as a Therapeutic Target Addiction encompasses everything from smoking cigarettes to methamphetamines, from taking opiates such as oxycodone and heroin to abusing sedatives, including Xanax™ and alcohol. 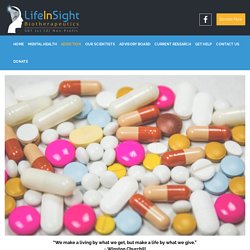 Diagnostically termed a “substance use disorder”, addiction is not a choice or character flaw, but rather a chronic brain disease characterized by compulsive or difficult to control drug seeking and use, despite harmful consequences. There are no known identifiable factors that predict whether a person will become addicted to drugs. However, current research suggests that the risk of substance use disorders is influenced by a combination of biological (genetic), environmental, and developmental factors. The Societal Impact of Substance Use Disorders Hope for the Future. Mental Health During COVID-19 For Patients and Those Recovered. 2020 started with a global pandemic that has changed the lives of billions across the world. 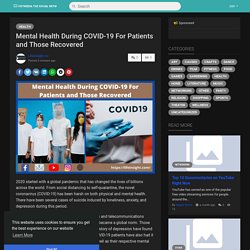 From social distancing to self-quarantine, the novel coronavirus (COVID-19) has been harsh on both physical and mental health. There have been several cases of suicide induced by loneliness, anxiety, and depression during this period. To combat and prevent such instances, helplines and telecommunications efforts were established when social distancing became a global norm. Those undergoing mental health treatment or have a history of depression have found themselves in a rather tricky spot. Recovered COVID-19 patients have also had it tough and are fighting battles with the virus as well as their respective mental health struggles.

Possible Mental Health Issues in Recovered Patients In 2003, when the SARS pandemic hit China, researchers found many suffering from psychiatric illness even when they were no longer infected. All you need to know about Parkinson's Disease: lifeinsightusa — LiveJournal. Parkinson's disease is a growing nervous system disorder that has effects on the movement of a person. 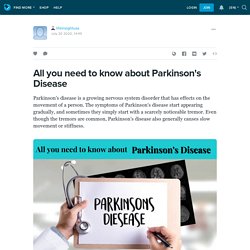 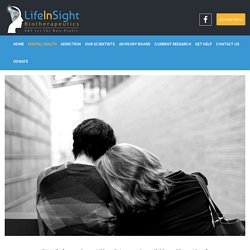 Thus, in that year, about 1 in 5 adults in the United States experienced the impact of mental illness, while about 1 in 22, or roughly 11 million, American adults lived with a serious mental health condition. Furthermore, 8.5 million people suffered from co-occurring mental health conditions and addiction disorders. Undoubtedly, the effects of mental illness are widespread. Such conditions also have devastating consequences, as suicide is increasing in incidence and is currently the 10th leading cause of death. Alzheimer's: Research and treatment: lifeinsightusa — LiveJournal. Alzheimer's disease is a kind of Dementia. 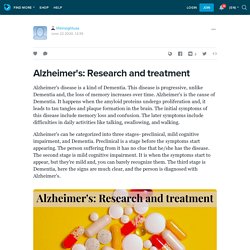 This disease is progressive, unlike Dementia and, the loss of memory increases over time. Alzheimer's is the cause of Dementia. It happens when the amyloid proteins undergo proliferation and, it leads to tau tangles and plaque formation in the brain. The initial symptoms of this disease include memory loss and confusion. The later symptoms include difficulties in daily activities like talking, swallowing, and walking. A glimpse into Dementia, PTSD and Cell phone addiction. In 2016, a team of well-established scientists hailed from some of the esteemed medical colleges in the USA allied and founded a nonprofit organization called LifeInSight BioTherapeutics. 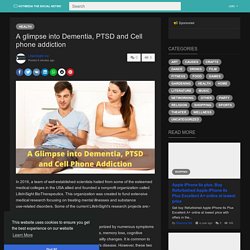 This organization was created to fund extensive medical research focusing on treating mental illnesses and substance use-related disorders. Alzheimer’s disease - lifeinsightinc - Medium. Our brain has a complex structure but it is the foundation for our well-being. 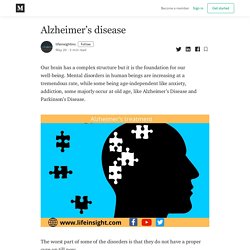 Mental disorders in human beings are increasing at a tremendous rate, while some being age-independent like anxiety, addiction, some majorly occur at old age, like Alzheimer’s Disease and Parkinson’s Disease. The worst part of some of the disorders is that they do not have a proper cure up till now. For example, Alzheimer’s treatment or Parkinson’s treatment has been found only for its symptoms but no complete cure of the disease has still been discovered.

A Foundation That Cares For Your Brain. “What mental health needs is more sunlight, more candor and more unashamed conversation.” 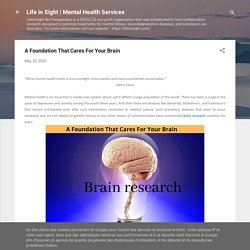 -Glenn Close. Mental health is an issue that is hardly ever spoken about, yet it affects a large population of the world. There has been a surge in the cases of depression and anxiety among the youth these years. And then there are diseases like dementia, Alzheimer's, and Parkinson's that remain untreatable even after such tremendous revolution in medical science. Such precarious diseases that seem to occur randomly and are not related to genetic history or any other means of communication have confounded brain research scientists for years. LifeInSight: Good News for the future of Alzheimer’s Disease. Mental health is complicated; it resolves around many minor and major aspects.

The mental well-being of a person is integral to their overall health and development. Today, around forty-four million people worldwide suffer from Alzheimer's disease or some other form of dementia. The stats are intimidating but the severity of any situation must be acknowledged before we even begin to tackle it. Let’s talk about Mental Health - lifeinsightinc - Medium. Every year in May, we celebrate Mental Health Month. We’ve come a long way from ignoring our mental health to taking immense care of our mental well-being. Today there are innumerable therapeutic measures, medications, procedures, and treatments available to deal with a variety of mental health problems. Even with all the progress we’ve made, mental health issues like Parkinson’s, substance abuse, and depression still go untreated in millions of people worldwide.

Role of cognitive neuroscience in Alzheimer’s disease care and treatment. Alzheimer’s disease and the challenges it poses Alzheimer's disease is a chronic condition causing degeneration and death of brain cells. It is the most common cause of dementia — a steady decline in cognitive, behavioral, and social skills that interferes with a person's ability to function independently. The disease's early signs can be to forget recent events or conversations.

A person with Alzheimer's disease will develop severe memory impairment as the disease progresses, and will lose the ability to perform daily tasks. Current medicines for the disease can improve symptoms temporarily or slow the rate of decline. Cognitive neuroscience and how it is helping answer these challenges Cognitive neuroscience is the study of how the brain makes the mind. Life in Sight — Mental Health: Quiet Cry for Help. Dementia and Anxiety: A discussion – Lifeinsight. What is Anxiety? When a person is under a lot of stress, the body exhibits a natural reaction depending on the amount of stress that a person is undergoing, which is called Anxiety. Some common examples of Anxiety include your first day at work or school, an ongoing project at work, or an important meeting. All of these events contribute to tension, physical changes in the body or other worries.