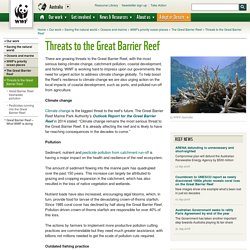 WWF is working hard to impress upon our governments the need for urgent action to address climate change globally. To help boost the Reef’s resilience to climate change we are also urging action on the local impacts of coastal development, such as ports, and polluted run-off from agriculture. Climate change. An Australian Marine Conservation Society film. Global Compact Network Australia. 14.1 By 2025, prevent and significantly reduce marine pollution of all kinds, in particular from land-based activities, including marine debris and nutrient pollution 14.2 By 2020, sustainably manage and protect marine and coastal ecosystems to avoid significant adverse impacts, including by strengthening their resilience, and take action for their restoration in order to achieve healthy and productive oceans 14.3 Minimize and address the impacts of ocean acidification, including through enhanced scientific cooperation at all levels 14.4 By 2020, effectively regulate harvesting and end overfishing, illegal, unreported and unregulated fishing and destructive fishing practices and implement science-based management plans, in order to restore fish stocks in the shortest time feasible, at least to levels that can produce maximum sustainable yield as determined by their biological characteristics 14.b Provide access for small-scale artisanal fishers to marine resources and markets. 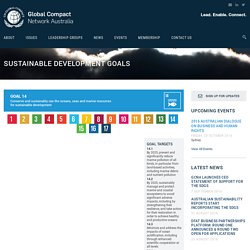 Department of the Environment and Energy, Australian Government. Overfishing in Australia and the Pacific. Standard Page - 11 May, 2011 Less than 1% of the world’s oceans are protected from all human activity. 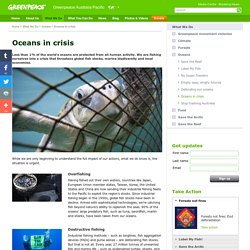 We are fishing ourselves into a crisis that threatens global fish stocks, marine biodiversity and local economies. While we are only beginning to understand the full impact of our actions, what we do know is, the situation is urgent. Overfishing Having fished out their own waters, countries like Japan, European Union member states, Taiwan, Korea, the United States and China are now sending their industrial fishing fleets to the Pacific to exploit the region’s stocks.

Destructive fishing Industrial fishing methods – such as longlines, fish aggregation devices (FADs) and purse seines – are obliterating fish stocks. Illegal fishing Our seas are also under attack from pirate, or illegal, fishers. Unfair fishing Despite the fact that more than half of the world’s tuna comes from the Pacific, Pacific Island nations gain little from fishing in their waters.

Climate Change. Australian Marine Conservation Society. Australian waters polluted by harmful tiny plastics. Each square kilometre of Australian sea surface water is contaminated by around 4,000 pieces of tiny plastics, according to our study published today in journal PLOS ONE and data repository Figshare. 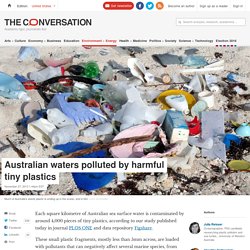 These small plastic fragments, mostly less than 5mm across, are loaded with pollutants that can negatively affect several marine species, from tiny fish and zooplankton to large turtles and whales. Plastic pollution hazards to Australian species and ecological communities are therefore likely broader than those officially recognised. Understanding the plastic pollution issue. Sustainable marine development, restoration and enhancement of marine habitats / Sustainable Oceans International. Overfishing – the plundering of our oceans. The extent of overfishing The global fishing fleet is 2.5 times larger than what the oceans can sustainably support – meaning that humans take far more fish from the ocean than can be replaced naturally. 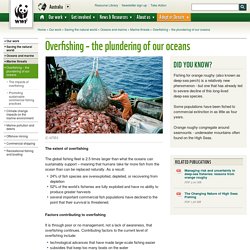 As a result: 24% of fish species are overexploited, depleted, or recovering from depletion 52% of the world’s fisheries are fully exploited and have no ability to produce greater harvests several important commercial fish populations have declined to the point that their survival is threatened.Factors contributing to overfishing It is through poor or no management, not a lack of awareness, that overfishing continues. Contributing factors to the current level of overfishing include: As coastal and pelagic (open ocean) fisheries around the world have declined, fishing effort has shifted to the deep sea and previously unexploited fish species.

As much as 40% of the world’s fishing grounds are now in waters deeper than 200 metres and many deep-water species are likely to be overexploited. Fight for the Reef. There are plans to expand ports and build new mega ports right along the coastline of the Great Barrier Reef. 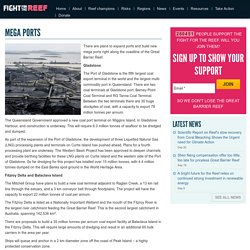 Gladstone The Port of Gladstone is the fifth largest coal export terminal in the world and the largest multi-commodity port in Queensland. There are two coal terminals at Gladstone port: Barney Point Coal Terminal and RG Tanna Coal Terminal. Between the two terminals there are 30 huge stockpiles of coal, with a capacity to export 78 million tonnes per annum. The Queensland Government approved a new coal port terminal on Wiggins Island, in Gladstone Harbour, and construction is underway. As part of the expansion of the Port of Gladstone, the development of three Liquefied Natural Gas (LNG) processing plants and terminals on Curtis Island has pushed ahead. Fitzroy Delta and Balaclava Island The Mitchell Group have plans to build a new coal terminal adjacent to Raglan Creek, a 13 km rail line through the estuary, and a 3 km conveyor belt through floodplains. Dudgeon Point Abbot Point. The Great Barrier Reef and the coal mine that could kill it.

These are dark days for Australia’s Great Barrier Reef. 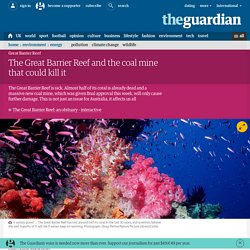 On 29 July, the last major regulatory hurdle facing the development of Australia’s largest coal mine was removed by Greg Hunt, minister for the environment. The Carmichael coal mine, owned by India’s Adani Group, will cover 200 sq km and produce 60m tonnes of coal a year – enough to supply electricity for 100 million people. Fact file: How healthy is the Great Barrier Reef? - Fact Check. Updated. 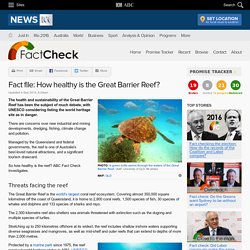