THE GEORGICS OF VIRGIL. BOOK II. - The Georgics. Arcadian Rhythms: The New Pastoralism in Contemporary Poetry. In lieu of an abstract, here is a brief excerpt of the content: Midwest Eclogue? 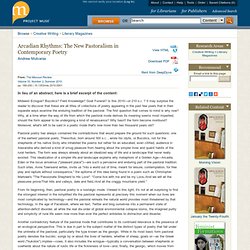 Bucolics? Field Knowledge? Goat Funeral? Is this 2010—or 210 B.C. ? Pastoral poetry has always contained the contradictions that would prepare the ground for such questions: one of the earliest pastoral poets, Theocritus, born around 300 B.C. , wrote his Idylls, or Bucolics, not for the shepherds of his native Sicily who inhabited the poems but rather for an educated, even citified, audience in Alexandria who derived a kind of smug pleasure from hearing about the simpler lives and quaint habits of the rural herders. Glossary of Poetic Terms : Learning Lab. Introduction to Latin Epic : Other Types of Hexameter Poetry. The famous pastoral. / Written in Italian by Signor' Torquato Tasso. And translated into English verse by John Dancer. Together with divers ingenious poems.

The Old Testament as Literature. The 23rd Psalm, one of the most popular Psalms (if not the most ‘famous’ or popular), is very well known. 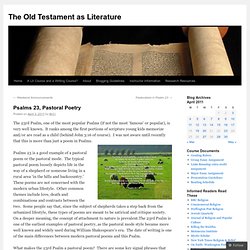 It ranks among the first portions of scripture young kids memorize and/or are read as a child (behind John 3:16 of course). I was not aware until recently that this is more than just a poem in Psalms. Alexander Pope: A Discourse on Pastoral Poetry. Alexander Pope wrote a version this essay in 1704, when he was at work on his Pastorals. 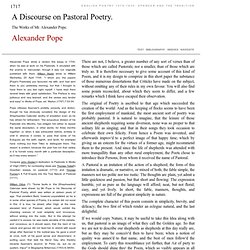 It circulated with the poems in manuscript, though it was not originally published with them. William Walsh wrote to William Wycherley, 20 April 1705: "I return you the papers [Pope's Pastorals] you favoured me with, and had sent them to you yesterday morning, but that I thought to have them to you last night myself. I have read them several times with great satisfaction.

The Preface is very judicious and very learned; and the verses very tender and easy" in Works of Pope, ed. Warton (1797) 7:53-54. Compare John Dryden's dedication to Pastorals in Works of Virgil (1697); for contrasting views see Thomas Tickell's Guardian essays on pastoral (1713) and Thomas Purney's A Full Enquiry into the True Nature of Pastoral (1717).

William Oldys (?) William Lisle Bowles: "The Discourse on Pastoral Poetry is certainly, as Dr. Herbert E. It is by rules like these that we ought to judge of Pastoral. [pp. 3-10] Seamus Heaney. Encyclopedia Britannica. Robert Frost: Poems Background. As a poet, Robert Frost was greatly influenced by the emotions and events of everyday life. 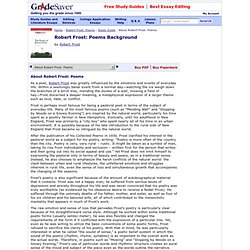 Within a seemingly banal event from a normal day—watching the ice weigh down the branches of a birch tree, mending the stones of a wall, mowing a field of hay—Frost discerned a deeper meaning, a metaphysical expression of a larger theme such as love, hate, or conflict. Frost is perhaps most famous for being a pastoral poet in terms of the subject of everyday life. Many of his most famous poems (such as “Mending Wall” and “Stopping by Woods on a Snowy Evening”) are inspired by the natural world, particularly his time spent as a poultry farmer in New Hampshire. Ironically, until his adulthood in New England, Frost was primarily a “city boy” who spent nearly all of his time in an urban environment. It is possibly because of his late introduction to the rural side of New England that Frost became so intrigued by the natural world.

Best Pastoral Poems - PoetrySoup. Pastoral. A pastoral lifestyle (see pastoralism) is that of shepherds herding livestock around open areas of land according to seasons and the changing availability of water and pasturage. 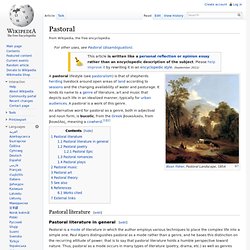 It lends its name to a genre of literature, art and music that depicts such life in an idealized manner, typically for urban audiences. Pastoral. Viewed alternately as a genre, mode, or convention in poetry (as well as in literature generally, art, and music), the pastoral tradition refers to a lineage of creative works that idealize rural life and landscapes, while the term "pastoral" refers to individual poems or other works in the tradition. 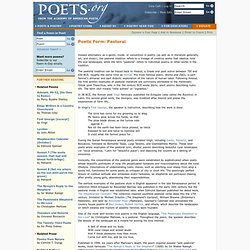 The pastoral tradition can be traced back to Hesiod, a Greek oral poet active between 750 and 650 BCE, roughly the same time as Homer. His most famous poem, Works and Days, is part farmer's almanac and part didactic exploration of the nature of human labor. Following Hesiod, the first written examples of pastoral literature are commonly attributed to the Hellenistic Greek poet Theocritus, who in the 3rd century BCE wrote Idylls, short poems describing rustic life.