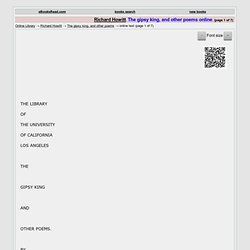 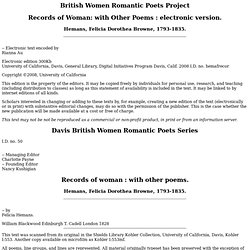 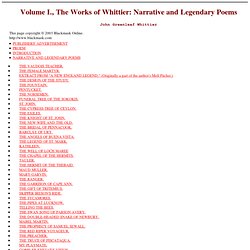 This etext was produced by David Widger widger@cecomet.net The Standard Library Edition of Mr. Whittier's writings comprises his poetical and prose works as re-arranged and thoroughly revised by himself or with his cooperation. Mr. The portraits prefixed to the several volumes have been chosen with a view to illustrating successive periods in the poet's life. Poem - love is the river of life poem. Found 66955 results: poem - love is the river of life poem Facility So easy 'tis to make a rhyme, That did the world but know it, Your coachman might Parnassus climb, Your butler be a poet. 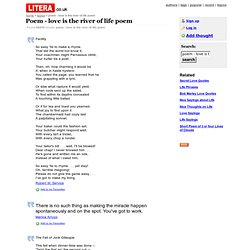 Then, oh, how charming it would be If, when in haste hysteric You called the page, you learned that he Was grappling with a lyric. Or else what rapture it would yield, When cook sent up the salad, To find within its depths concealed A touching little ballad. Or if for tea and toast you yearned, What joy to find upon it The chambermaid had coyly laid A palpitating sonnet. Poems of James Russell Lowell,: with biographical sketch by Nathan Haskell Dole. The Kalevala: Epic Poem of Finland.

MASTERED by desire impulsive, By a mighty inward urging, I am ready now for singing, Ready to begin the chanting Of our nation's ancient folk-song Handed down from by-gone ages. 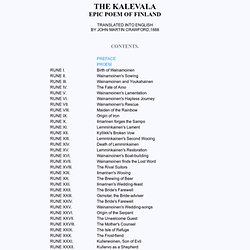 In my mouth the words are melting, From my lips the tones are gliding, From my tongue they wish to hasten; When my willing teeth are parted, When my ready mouth is opened, Songs of ancient wit and wisdom Hasten from me not unwilling. Golden friend, and dearest brother, Brother dear of mine in childhood, Come and sing with me the stories, Come and chant with me the legends, Legends of the times forgotten, Since we now are here together, Come together from our roamings. Poems. I POEMS GOOD-BYE GOOD-BYE, proud world! 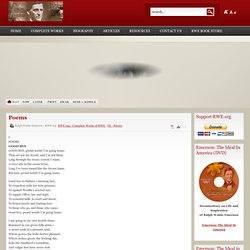 I'm going home: Thou art not my friend, and I'm not thine. Long through thy weary crowds I roam; A river-ark on the ocean brine, Long I've been tossed like the driven foam; But now, proud world! PLEACHING. The RIC Good Wood Guide (See also Living Fences) by Mark Primack In this article, Mark discusses Rudolph Doernach's adaptation of the ancient weaving technique of pleaching in order to grow living houses using bent, grafted and pruned willow branches to create habitable shapes.

(See also the comments on Pleaching in Non Timber Building Materials) A plant is considered to be 'inosculate' 1 if it is self-grafting; if the branch of one individual will, as the result of gentle abrasion, form a living bond with the branch of another individual, or with another branch of the same plant. 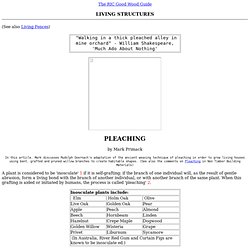 May 2013. We had a wild mix of weather during our long holiday weekend, starting out with a sunny Saturday near 80º that was perfect for all our outdoor chores and projects, but also a nice long walk with our three dogs (and my little neglected Kodak). 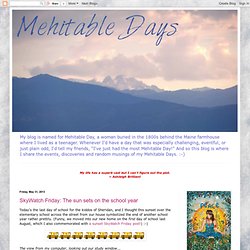 The lilacs have been a riot of color and fragrance lately, and I was hoping to photograph some of them. Got lucky just a few blocks into our walk with this long and tall blooming hedge of them... I added a discreet arrow to point out the white cluster of blossoms among the purple! My attempt to get a better photo of the white blossoms wasn't very successful because of the mix of bright sun and shadow... Alan Seeger. Poems. 1916. Juvenilia, continued. Translations. FLORENCE, rejoice! 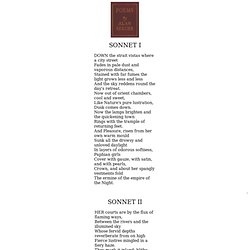 For thou o'er land and sea So spread'st thy pinions that the fame of thee Hath reached no less into the depths of Hell. So noble were the five I found to dwell Therein---thy sons---whence shame accrues to me And no great praise is thine; but if it be That truth unveil in dreamings before dawn, Then is the vengeful hour not far withdrawn When Prato shall exult within her walls To see thy suffering. Whate'er befalls, Let it come soon, since come it must, for later, Each year would see my grief for thee the greater. We left; and once more up the craggy side By the blind steps of our descent, my guide, Remounting, drew me on.

So we pursued The rugged path through that steep solitude, Where rocks and splintered fragments strewed the land So thick, that foot availed not without hand. Eugene Aram by Lytton, Edward Bulwer - Chapter 43. Each substance of a grief hath twenty shadows, For Sorrow's eye, glazed with blinding tears, Divides one thing entire to many objects. . . . . . . . . . . . . . 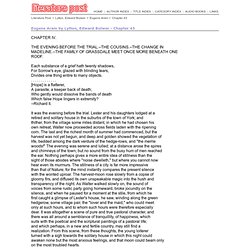 [Hope] is a flatterer, A parasite, a keeper back of death; Who gently would dissolve the bands of death Which false Hope lingers in extremity? --Richard II. It was the evening before the trial. Lester and his daughters lodged at a retired and solitary house in the suburbs of the town of York; and thither, from the village some miles distant, in which he had chosen his own retreat, Walter now proceeded across fields laden with the ripening corn. Feeling Our Way Around.

23rd October 2011 People often ask: how do you know if you’re an artist? My answer is: You have no choice. By that I mean you can’t turn it off – and believe me, I’ve tried! As an artist you are continually taking in the world around you and then trying to digest and reduce your experience of it into something worth expressing. The Most Haunted Places in London.

Once the heart of the mighty British Empire, London continues to be one of the most important cities of the world. Inhabited since the 2nd Century AD, this city is a living museum of the Human history of the last two millenniums. It's A High Wind Blowing (Marcel Van Der Linden) 3Gp Video Mobile. Lyrics by Maria D'Alessandro ©2012 Music by Marcel van der Linden It's a aerial wind alarming beyond the Northernsea It's a low down hobo attractive to alive for chargeless It's a activity account active back there's affluence of giving It's a adamantine alley to heaven if you can't stop aberrant CHORUS I can't assume to see the backwoods for the copse I don't wanna alive my activity on bended knees Help me acquisition a way that I can be accurate to me I appetite the apple to apperceive aloof how I feel It's a aerial wind alarming beyond the Northern anchorage It's a ambulant affection that never takes a wife It's an enemy's win that makesya admiration why?

HE HEARD HER SING by James Thomson B.V. An evening and night of song.