Remove Fiber.Js - Virus Removal. How Harmful Is Fiber.Js This is a virus based primarily on advertisement activities. 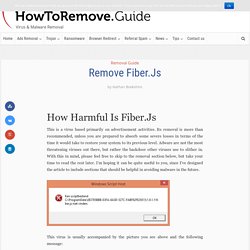 Its removal is more than recommended, unless you are prepared to absorb some severe losses in terms of the time it would take to restore your system to its previous level. Adware are not the most threatening viruses out there, but rather the backdoor other viruses use to slither in. With this in mind, please feel free to skip to the removal section below, but take your time to read the rest later. I’m hoping it can be quite useful to you, since I’ve designed the article to include sections that should be helpful in avoiding malware in the future. This virus is usually accompanied by the picture you see above and the following message: Remove fiber.js pop-up error (Virus Removal Guide) If you are seeing an Windows Script Host pop-up error from fiber.js when starting Windows, then your computer is infected with adware or a browser hijacker. 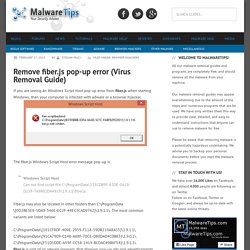 Windows script host error [Solved] Don't Worry,,, Dude,,, it's not a problem...Ok Actually Ur settings are set to defaults...Just do as I written follow..... actually windows script host is created by microsoft for running any types of scripts in startup mode... you can disable Windows Script Host; this will prevent users from running any scripts (including VBScript and JScript scripts) that rely on WSH. 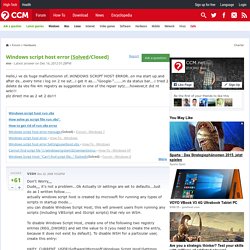 To disable Windows Script Host, create one of the following two registry entries (REG_DWORD) and set the value to 0 (you need to create the entry, because it does not exist by default). To disable WSH for a particular user, create this entry: HKEY_CURRENT_USER\Software\Microsoft\Windows Script Host\Settings\Enabled Now...When enforced, the following message will be displayed any time a user attempts to run a WSH script: Windows script host et fiber.js. Voici la correction à effectuer avec FRST. 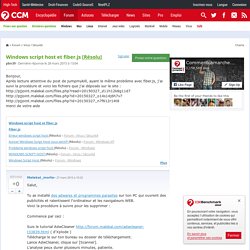 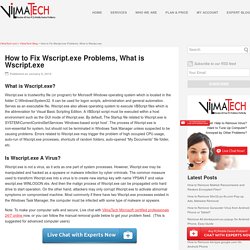 Wscript.exe is trustworthy file (or program) for Microsoft Windows operating system which is located in the folder C:\Windows\System32. It can be used for logon scripts, administration and general automation. Serves as an executable file, Wscript.exe also allows operating system to execute VBScript files which is the abbreviation for Visual Basic Scripting Edition. A VBScript script must be executed within a host environment such as the GUI mode of Wscript.exe. Is Wscript.exe A Virus? Wscript.exe is not a virus, as it acts as one part of system processes. Note: To make your computer safe and secure, Live chat with VilmaTech Microsoft certified professionals 24/7 online now, or you can follow the manual removal guide below to get your problem fixed. 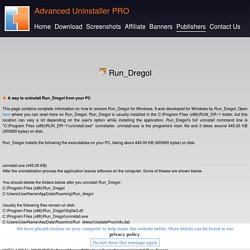 It was developed for Windows by Run_Dregol. Open here where you can read more on Run_Dregol. Run_Dregol is usually installed in the C:\Program Files (x86)\RUN_DR~1 folder, but this location can vary a lot depending on the user's option while installing the application. Run_Dregol's full uninstall command line is "C:\Program Files (x86)\RUN_DR~1\\uninstall.exe" /uninstaller. uninstall.exe is the programs's main file and it takes around 445.00 KB (455680 bytes) on disk. Run_Dregol installs the following the executables on your PC, taking about 445.00 KB (455680 bytes) on disk. uninstall.exe (445.00 KB)After the uninstallation process the application leaves leftovers on the computer. How to remove Run_Dregol from your computer with the help of Advanced Uninstaller PRO.

Whatever happened to Google Image previews and search settings???