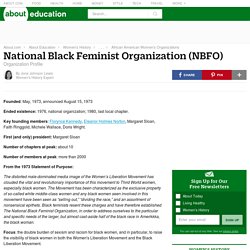 Key founding members: Florynce Kennedy, Eleanor Holmes Norton, Margaret Sloan, Faith Ringgold, Michele Wallace, Doris Wright. First (and only) president: Margaret Sloan Number of chapters at peak: about 10 Number of members at peak: more than 2000 From the 1973 Statement of Purpose: The distorted male-dominated media image of the Women’s Liberation Movement has clouded the vital and revolutionary importance of this movement to Third World women, especially black women. Focus: the double burden of sexism and racism for black women, and in particular, to raise the visibility of black women in both the Women's Liberation Movement and the Black Liberation Movement. The initial Statement of Purpose also emphasized the need to counter negative images of black women. In that statement, black nationalists were compared to white racists. 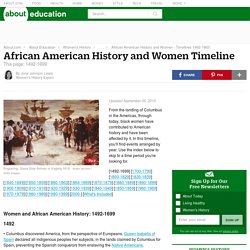 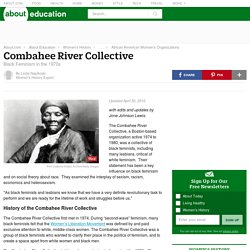 Their approach looked at a "simultaneity of oppressions" rather than ranking and separating the oppressions at work, and in their work is rooted much of later work on intersectionality. Influences Barbara Smith is credited with suggesting the name.