Raine study and other biological studies 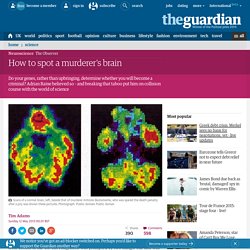 His emigration was prompted by two things. The first was a sense of banging his head against a wall. Raine, who grew up in Darlington and is now a professor at the University of Pennsylvania, was a researcher of the biological basis for criminal behaviour, which, with its echoes of Nazi eugenics, was perhaps the most taboo of all academic disciplines. In Britain, the causes of crime were allowed to be exclusively social and environmental, the result of disturbed or impoverished nurture, rather than fated and genetic nature. To suggest otherwise, as Raine felt compelled to, having studied under Richard Dawkins and been persuaded of the "all-embracing influence of evolution on behaviour", was to doom yourself to an absence of funding.

Even two decades ago, these were difficult findings to publish, however. The reason for this delay seems mired in ideological enmities. Raine Brain Abnormalities. Neuroimagingaggession(1) Raine study Biological Psychology. Background A relatively new way of looking for differences between people is to examine patterns of brain activity through the use of imaging techniques. 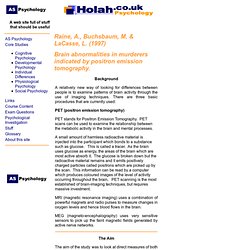 There are three basic procedures that are currently used: PET (positron emission tomography) PET stands for Positron Emission Tomography. PET scans can be used to examine the relationship between the metabolic activity in the brain and mental processes. A small amount of harmless radioactive material is injected into the participant which bonds to a substance such as glucose.

MRI (magnetic resonance imaging) uses a combination of powerful magnets and radio pulses to measure changes in oxygen levels and hence blood flows in the brain. MEG (magneto-encephalography) uses very sensitive sensors to pick up the faint magnetic fields generated by active nerve networks. The Aim Procedure/Method The method is a laboratory experiment using an independent measures design. . · Schizophrenia (6 cases) · Head injury or organic damage (23) How we see half the world through the prism of language. Whereas I might say a jumper is blue or red, female acquaintances of mine refer to all sorts of gradations in between, such as navy blue, shocking pink, and many others that I can’t even recall. 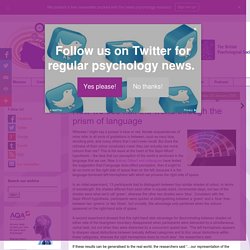 But does the richness of their colour vocabulary mean they can actually see more colours than me? This is the issue at the heart of the Sapir-Whorf hypothesis – the idea that our perception of the world is anchored in the language that we use. Now Aubrey Gilbert and colleagues have tested the suggestion that if language does affect perception, then it ought to do so more on the right side of space than on the left, because it is the language-dominant left-hemisphere with which we process the right side of space. In an initial experiment, 13 participants had to distinguish between four similar shades of colour. Post written by Christian Jarrett (@psych_writer) for the BPS Research Digest.

The brain's great connector. Pick two people off the street at random, put them in a brain scanner, and look at the thickness of their corpus callosums – that’s the massive bundle of nerve fibres that connects the two halves of the brain. 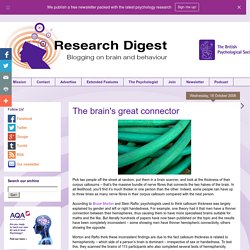 In all likelihood, you’ll find it’s much thicker in one person than the other. Indeed, some people can have up to three times as many nerve fibres in their corpus callosum compared with the next person. According to Bruce Morton and Stein Rafto, psychologists used to think callosum thickness was largely explained by gender and left or right handedness. For example, one theory had it that men have a thinner connection between their hemispheres, thus causing them to have more specialised brains suitable for maths and the like.

But literally hundreds of papers have now been published on the topic and the results have been completely inconsistent – some showing men have thinner hemispheric connectivity, others showing the opposite. Morton, B.E. & Rafto, S.E. (2006).