Sugata Mitra - Learning {Re}imagined. Sugata Mitra – Education and Empire. Famed for his “Hole in the Wall” experiments with children and computers in slum districts in India, winner of the $1 million TED Prize, proponent of emergent learning theory and advocate of self organising learning environments (SOLE), Sugata Mitra has successfully challenged what many of us think we know about learning and technology. 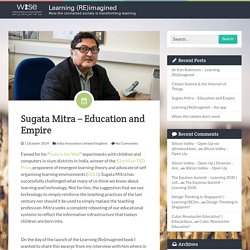 Not for him, the suggestion that we use technology to simply reinforce the teaching practices of the last century nor should it be used to simply replace the teaching profession. Mitra seeks a complete rebooting of our educational systems to reflect the information infrastructure that todays children are born into. Preschool Without Walls. SEATTLE — Three-year-old Desi Sorrelgreen’s favorite thing about his preschool is “running up hills.” 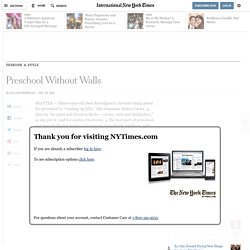 His classmate Stelyn Carter, 5, likes to “be quiet and listen to birds — crows, owls and chickadees,” as she put it. And for Joshua Doctorow, 4, the best part of preschool just may be the hat he loves to wear to class (black and fuzzy, with flaps that come down over his ears). All three children are students at Fiddleheads Forest School here, where they spend four hours a day, rain or shine, in adjacent cedar grove “classrooms” nestled among the towering trees of the University of Washington Botanic Gardens. The program, in its third year, is less than seven miles from Microsoft, which means some parents sit in front of computers all day inventing the digital future, while Fiddleheads children make letters out of sticks or cart rocks around in wheelbarrows. 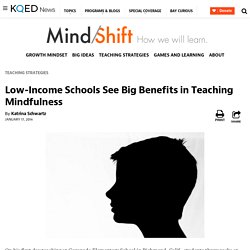 He spent fifteen minutes of every class calming down a handful of kids in this low-income-neighborhood public school who wouldn’t follow directions or behave. Larochette began practicing meditation and mindfulness to cope with his own stresses of teaching and supporting traumatized kids. He believed the breathing techniques that helped calm his fears might work for his students too, so he founded the Mindful Life Project. “Before we can teach a kid how to academically excel in school, we need to teach him how to have stillness, pay attention, stay on task, regulate, make good choices,” said Larochette.

“We tell kids be quiet, calm yourself down, be still. Hierarchical Collective m.of o. Our brains, and how they're not as simple as we think. I never used to discuss neuroscience on the bus but it's happened twice in the last month. 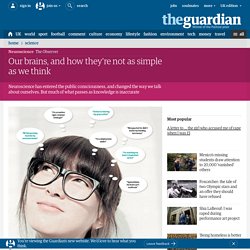 On one occasion a fellow passenger mentioned that her "brain wasn't working properly" to explain that she had gone through a long period of depression. Theories of Learning. Connectivism: A new type of learning ... III Manifesto pela Educação Brasileira - Mudar a Escola, Melhorar a Educação: Transformar um País! - Românticos Conspiradores. Brasil, 01 de outubro de 2013. 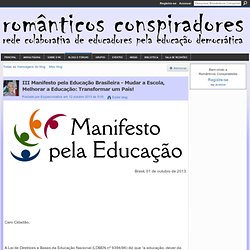 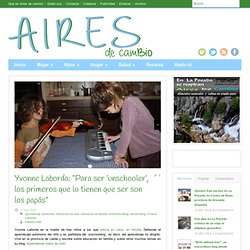 Www.essex.ac.uk/ebs/research/conferences/EBS_January_2013/EBS_Research_Conference_Jan2013_Sliwa_Johansson.pdf. Lost in the Meritocracy - Walter Kirn. On the bus ride down to St. 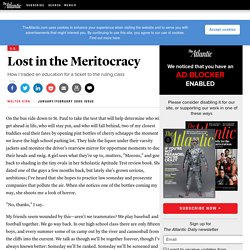 Paul to take the test that will help determine who will get ahead in life, who will stay put, and who will fall behind, two of my closest buddies seal their fates by opening pint bottles of cherry schnapps the moment we leave the high school parking lot. They hide the liquor under their varsity jackets and monitor the driver's rearview mirror for opportune moments to duck their heads and swig. A girl sees what they're up to, mutters, "Morons," and goes back to shading in the tiny ovals in her Scholastic Aptitude Test review book. She dated one of the guys a few months back, but lately she's grown serious, ambitious; I've heard that she hopes to practice law someday and prosecute companies that pollute the air. When she notices one of the bottles coming my way, she shoots me a look of horror.

"No, thanks," I say. Developing 21st Century Critical Thinkers. As we venture into the 21st century, we as a society, are faced with more innovation and challenge than ever before. 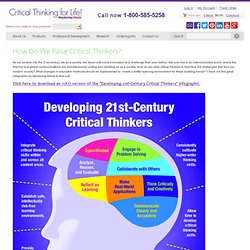 We now live in an interconnected world, where the Internet and global communications are simultaneously uniting and isolating us as a society. How do we raise critical thinkers to best face the challenges that face our modern society? What changes in education methods should be implemented to create a better learning environment for these budding minds? Check out this great infographic by Mentoring Minds to find out! Click here to download an 11X17 version of the "Developing 21st-Century Critical Thinkers" infographic.

Www.mentoringminds.com/media/wysiwyg/PDFs/Thoughtleadership/CriticalThinkingPoster_Small.pdf. » I Am Learner John Connell.

Pearlers' Learning Theory. Sugata Mitra: Build a School in the Cloud. Sociedad aumentada y aprendizaje #IBERTIC. Aprende a codificar. Education. How To Connect With Digitally Distracted Students. 10 Ways To Become A Better Online Learner 5.43K Views 0 Likes There are some quick and easy ways to become a better online learner. Whether you're taking a class or just researching, here are the DOs and DON'Ts. Winter 2012 [8 - 9] 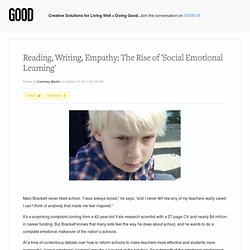 “I was always bored,” he says, “and I never felt like any of my teachers really cared. I can’t think of anybody that made me feel inspired.” It’s a surprising complaint coming from a 42-year-old Yale research scientist with a 27-page CV and nearly $4 million in career funding. But Brackett knows that many kids feel the way he does about school, and he wants to do a complete emotional makeover of the nation’s schools. 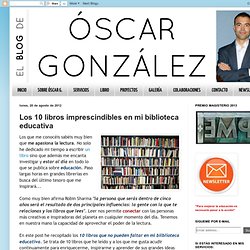 Alternative Education. ¿Cómo educar las emociones. Doing More Time in School: A Cruel Non-Solution to Our Educational Problems. School doesn’t work very well, so let’s make kids do more of it! That seems to be the policy enthusiastically supported by President Obama, by his education secretary Arne Duncan, by many teachers’ unions (as long as the teachers are well paid for the extra time), and by many education policy makers in and out of academia. Kids aren’t learning much in school, so let’s make them start school when they are younger; let’s make them stay more hours in school each day and more days each year; and let’s not allow them to leave until they are at least 18 years old. Let’s do all this especially to the poor kids; they are getting the least out of school now, so let’s lengthen their time in school even more than we lengthen the time for others! As I read and listen to the arguments for more forced schooling, what disturbs me most is the complete disregard for the opinions of students.

La importancia del espacio de aprendizaje. Kunskapskolan en Suecia. Exercício de dialética. Fellipe Gonzalez. Collaborative Team Teaching: Challenges and Rewards. What does CTT stand for? Some people think it's "creative thinkers thinking," or "cool teachers teaching. " Others say it's "conflict tackling together. " While CTT means all of the above, it stands for "collaborative team teaching" and refers to the idea of a co-teaching partnership.

Over the years, I have taught in seven co-teaching partnerships in a wide range of classroom environments. This is the path for many dually certified special education teachers in New York City as the push for inclusion continues to spread. Having co-taught in first grade, second grade and sixth grade, I feel confident in saying that the greatest challenge is finding a working model for middle school co-teachers. Los niños siempre serán más listos que nosotros - 19.05.2012 - lanacion.com.

One is a PDF designed to be read on your screen. Feel free to email this anyone you think might want to read it. You're also free to post it on a website, as long as you don't edit it or charge for it. The other featured edition is a PDF formatted to be printed on any printer. Desescolarizar l Edilberto Sastre e Tatiana Espíndola. 13 ideias radicais para salvar a Educação.