A collection of resources to help you prepare for oral presentations

How to use rhetoric to get what you want - Camille A. Langston. Aristotle, the student of Plato, taught first in Plato’s Academy and then tutored Alexander the Great, and finally established his Athenian philosophical school the Lyceum. 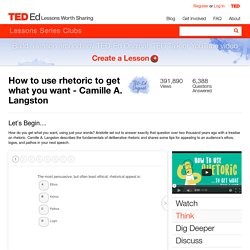 The Lyceum is an amazing place to visit. Watch this video to learn more about the its remains here. In the fourth century BC, Aristotle compiled several of his lectures, two of which he wrote when he taught in Plato’s Academy and two later when teaching in his Lyceum, into the treatise, Rhetoric, which he used as a text. His teaching method differed from others; Aristotle was a peripatetic lecturer, which means he walked around as he spoke with his students instead of standing in the front of a room.

He is accredited with developing the peripatetic teaching style. Aristotle was not born in Athens and was not an orator like the sophists, and one of the most famous orators of the age, Cicero, were. How to Give a Toast. Toast Tips. Here are some toast tips to keep in mind when it's your turn to make a toast: Be yourself -- If you were Jay Leno, you'd make big money with your speeches. 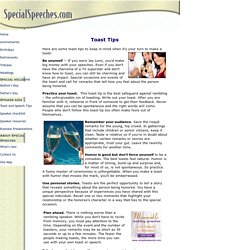 Even if you don't have the charisma of a TV superstar and don't know how to toast, you can still be charming and have an impact. Special occasions are events of the heart and call for remarks that tell how you feel about the person being honored. Practice your toast. Remember your audience. Humor is good but don’t force yourself to be a comedian. Use personal stories. 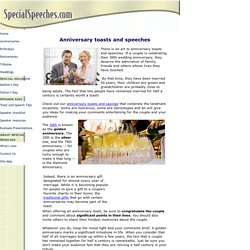 If a couple is celebrating their 50th wedding anniversary, they deserve the admiration of family, friends and others whose lives they have touched. By that time, they have been married 50 years, their children are grown and grandchildren are probably close to being adults. The fact that two people have remained married for half a century is certainly worth a toast! Check out our anniversary toasts and sayings that celebrate the landmark occasions. Some are humorous, some are stereotypes and all will give you ideas for making your comments entertaining for the couple and your audience. 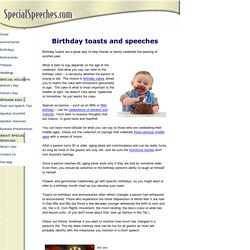 What is best to say depends on the age of the celebrant. And what you say can refer to the birthday cake -- a necessity whether the person is young or old. The choice in birthday cakes allows you to match the cake with someone's personality or age. The cake is what is most important to the toddler at right. He doesn't care about speeches or formalities: he just wants his cake. Special occasions -- such as an 80th or 90th birthday -- call for celebrations of wisdom and maturity. You can have more latitude for what you can say to those who are celebrating their middle ages. After a person turns 30 or older, aging jokes are commonplace and can be really funny so long as none of the guests are truly old. Once a person reaches 60, aging jokes work only if they are told by someone older. Retirement Speeches. Open with general greeting and recognition of any special guests. 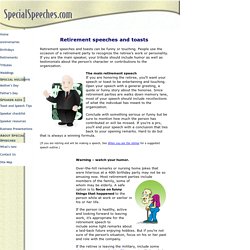 You will want to recognize family members of the honoree as you begin. Tell a story about the retiree and his work habits. The story should relate in some positive way to others in the organization. Make some comments about the retiree's role in the overall organization. Tell some stories about his work or experiences others had in working with the retiree. Mention that other people will also be sharing stories or giving toasts. Make some overall comments restating how the honored guest has influenced the organization or his work area. Job Interviews. Elevator Speech. Impromptu Speaking. KP's Speech Class Storytelling Speech Sample. KP's Speech Class - Choosing an Informative Speech Topic. KP's Speech Class - Criteria for Choosing Persuasive Topic. BelmontSpeechLab. How to make Kimbap. How to Offer Feedback. Are You A Good Listener?

Being a good listener is an essential skill that all people could probably work on. 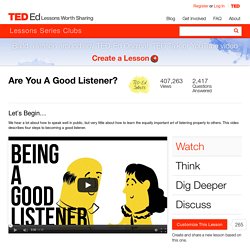 Need some more ideas about how to improve your own listening skills? Start with: 9 Things Good Listeners Do Differently. Learn how to be an active listener here! Interested in building resilience? Start with some good listening skills like "echoing. " What is the science behind actually hearing something?

Need a TED Talk on this topic?