Practical Dating Advice and Tips for Men - Nick Notas. During a drive the other day, I listened to “Quitters, Inc.” by Stephen King. 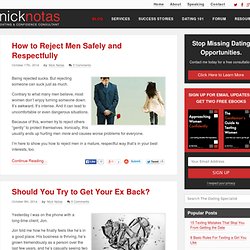 It’s the tale of a married man named Dick Morrison. An old college roommate runs into Dick and refers him to a company called, “Quitters, Inc.” With their help, his roommate successfully quit smoking and got a big promotion at work. What Other Choice Do You Have? Think of an important goal you wish you could achieve. 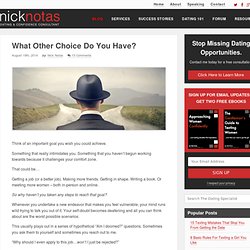 Something that really intimidates you. Something that you haven’t begun working towards because it challenges your comfort zone. That could be… Getting a job (or a better job). 40 websites that will make you cleverer right now. The indexed web contains an incredible 14 billion pages. 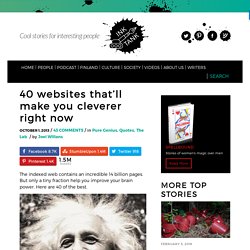 But only a tiny fraction help you improve your brain power. Here are 40 of the best. whizzpast.com – Learn about our awe inspiring past all in one wonderful place. khanacademy.org – Watch thousands of micro-lectures on topics ranging from history and medicine to chemistry and computer science. freerice.com – Help end world hunger by correctly answering multiple-choice quizzes on a wide variety of subjects.

Improving Your Life. A No-Fail Strategy To Help You Stop Sabotaging Yourself. Are you driving yourself crazy with dumb mistakes, "what was I thinking? " comments, and other lunkheaded moves? Martha Beck offers a no-fail strategy to get you back on the right track. By Martha Beck. Neil Rosenthal: How to become more emotionally available. By Neil RosenthalSpecial to The Denver Post Posted: 03/07/2013 12:01:00 AM MST Boulder therapist Neil Rosenthal. 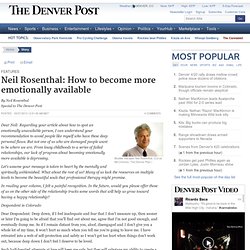 (Cyrus McCrimmon, The Denver Post ) Dear Neil: Regarding your article about how to spot an emotionally unavailable person, I can understand your recommendation to avoid people like myself who have these deep personal flaws. But not one of us who are damaged people want to be where we are. Let's assume your message is taken to heart by the mentally and spiritually unblemished. In reading your column, I felt a painful recognition. Despondent in Colorado. How to Communicate with "Emotionally Distant" Men. I realized something important this week about how men think and act. 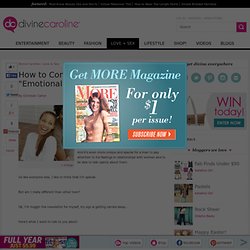 It’s that men who pay attention and think about the feelings they have, why they have them, what they mean and how to talk about them are RARE. And it’s even more unique and special for a man to pay attention to his feelings in relationships with women and to be able to talk openly about them. So like everyone else, I like to think that I’m special. But am I really different than other men? Ok, I’m hoggin the newsletter for myself, my ego is getting carried away… CREATING INTIMATE CONVERSATIONS » COLLABORATIVE COUPLE THERAPY. In an earlier newsletter, I gave the following example of the kind of intimate conversation that I try to help partners have. 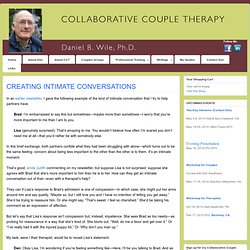 Brad: I’m embarrassed to say this but sometimes—maybe more than sometimes—I worry that you’re more important to me than I am to you. Lisa (genuinely surprised): That’s amazing to me. You wouldn’t believe how often I’m scared you don’t need me at all—that you’d rather be with somebody else. In this brief exchange, both partners confide what they had been struggling with alone—which turns out to be the same feeling: concern about being less important to the other than the other is to them.

It’s an intimate moment. Healing With the Opposite Gender Parent - part 3 - intimacytraining.com. 'A STORY OF SARA'Healing with the opposite gender parent: a story of SaraIn the last columns we highlighted a case example of a man who began to recognize that some of the difficulties he was having in his marriage stemmed back to unexplored and unresolved feelings he had experienced with his mother. 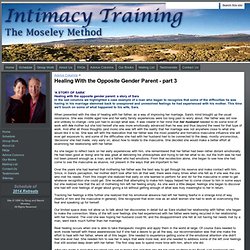 This time we'll touch on some of what happened to his wife, Sara. When presented with the idea of healing with her father, as a way of improving her marriage, Sara's mind brought up the usual resistance. Dear Readers, I have written about shame before, but I find I am still fascinated by it, so here I go again. 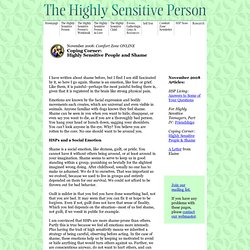 Shame is an emotion, like fear or grief. Like them, it is painful--perhaps the most painful feeling there is, given that it is registered in the brain like strong physical pain. Emotions are known by the facial expression and bodily movements each creates, which are universal and even visible in animals. Recovering from Shame. 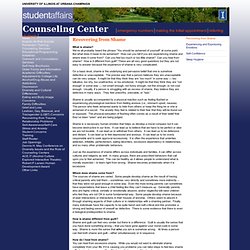 We’ve all probably heard the phrase “You should be ashamed of yourself” at some point. But what does it mean to be ashamed? How can you tell if you are experiencing shame and where does it come from? Guilt and Shame. Christmas and New Year Group Closures Monday Support & Recovery Group: Closed 22, 29 December. 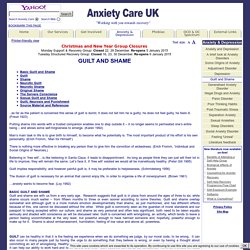 Re-opens 5 January 2015 Tuesday Structured Recovery Group: Closed 16, 23, 30 December. Re-opens 6 January 2015 ..as far as the patient is concerned this sense of guilt is dumb; it does not tell him he is guilty; he does not feel guilty, he feels ill. (Freud 1923) Shame: The Quintessential Emotion. He’s Shamed, She’s Shamed Do men and women respond similarly when shamed? “It has been common in shame-based conditions to say that men ‘act out’ and women ‘act in,’” Kipnis said. In his book, “Shame: The Exposed Self,” Lewis says that not only do women feel more shame than men, they tend to express it differently. Typically, females have dealt with shame through introversion and self-hate while males have been more likely to exhibit extreme anger and violence. Lewis found the major causes of shame in women are feelings of unattractiveness or perceived failures in personal relationships. In a 1997 article in the Electronic Journal of Sociology, Thomas J.

Building Your Resilience to Shame. Shame doesn’t only reside in trauma. In fact, everyone experiences shame, according to researcher and author Brené Brown, Ph.D. You can feel shame about anything and everything. “And, while it feels like shame hides in our darkest corners, it actually tends to lurk in all of the familiar places, including appearance and body image, motherhood, family, parenting, money and work, mental and physical health, addiction, sex, aging and religion,” Brown writes in her book I Thought It Was Just Me (but it isn’t): Telling the Truth About Perfectionism, Inadequacy, and Power. Specifically, Brown defines shame as: “an intensely painful feeling or experience of believing we are flawed and therefore unworthy of acceptance and belonging.

Healing Shame. Understanding How Shame Binds Us and How to Begin to Free Ourselves Robert D. Caldwell, M.Div. Shame is the inner experience of being "not wanted. " It is feeling worthless, rejected, cast-out.