Baltimore Car Accident Lawyers. Many automobile accidents and mishaps can be prevented if drivers took the time to perform a few safety checks on their vehicles on a regular basis. 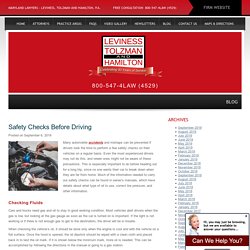 Even the most experienced drivers may not do this, and newer ones might not be aware of these precautions. This is especially important to do before heading out for a long trip, since no one wants their car to break down when they are far from home. Much of the information needed to carry out safety checks can be found in owner’s manuals, which have details about what type of oil to use, correct tire pressure, and other information. Checking Fluids Cars and trucks need gas and oil to stay in good working condition. When checking the vehicle’s oil, it should be done only when the engine is cool and with the vehicle on a flat surface. Hyundai Expands Child Monitoring Systems. According to recent data, 52 children suffered from fatal heat-related injuries after being left inside of hot cars in 2018, stating that this was the highest number of deaths from vehicular heatstroke in the past 21 years. 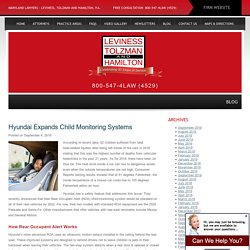 As for 2019, there have been 24 thus far. The heat level inside a car can rise to dangerous levels, even when the outside temperatures are not high. Consumer Reports testing results showed that at 61 degrees Fahrenheit, the inside temperature of a closed car could rise to 105 degrees Fahrenheit within an hour. Audi E-Tron Named Top Safety Pick by IIHS.

The Insurance Institute for Highway Safety (IIHS) named an electric car its top safety pick; the first electric battery-operated vehicle that was awarded this honor. 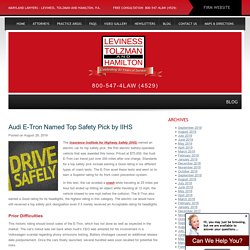 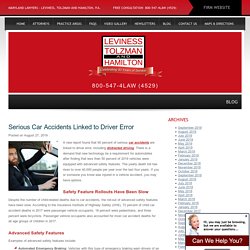 There is a demand that new technology be a requirement for automobiles after finding that less than 50 percent of 2019 vehicles were equipped with advanced safety features. The yearly death toll has risen to over 40,000 people per year over the last four years. If you or someone you know was injured in a vehicle accident, you may have options. Safety Feature Rollouts Have Been Slow Despite the number of child-related deaths due to car accidents, the roll-out of advanced safety features have been slow. Advanced Safety Features. When is an Injury Considered Catastrophic? Traffic accidents can cause a range of serious, life-threatening injuries that require immediate medical attention. 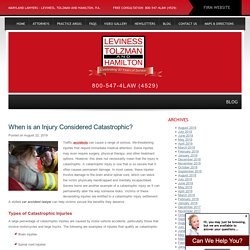 Some injuries may even require surgery, physical therapy, and other treatment options. However, this does not necessarily mean that the injury is catastrophic. A catastrophic injury is one that is so severe that it often causes permanent damage. In most cases, these injuries involve damage to the brain and/or spinal cord, which can leave the victim physically handicapped and mentally incapacitated.

Impact of Technology in Personal Injury Law. There is no doubt that advances in technology have a significant impact on the way we communicate. 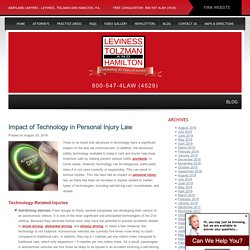 In addition, the advanced safety technology available in today’s cars and trucks help keep motorists safe by helping prevent serious traffic accidents. In some cases, however, technology can be dangerous, particularly when it is not used correctly or responsibly. This can result in serious injuries. This has also had an impact on personal injury law, as there has been an increase in injuries related to certain types of technologies, including self-driving cars, hoverboards, and drones.

Technology-Related Injuries Self-Driving Vehicles: From Google to Tesla, several companies are developing their version of an autonomous vehicle. Personal Injury Law in Maryland. How Can Seniors Stay Safe Behind the Wheel? The aging process affects everyone differently, but some of the most common physical changes that occur as we age include vision deterioration, hearing loss, decreased motor skills, and slower reflexes. 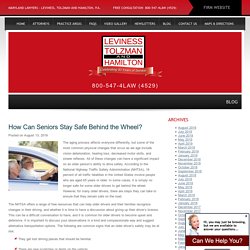 All of these changes can have a significant impact on an older person’s ability to drive safely. According to the National Highway Traffic Safety Administration (NHTSA), 18 percent of all traffic fatalities in the United States involve people who are aged 65 years or older. In some cases, it is simply no longer safe for some older drivers to get behind the wheel. Baltimore Car Accident Lawyers. Car travel is the main mode of transportation for many Americans, yet carries inherent risks, including injury and death, in the case of a serious accident. 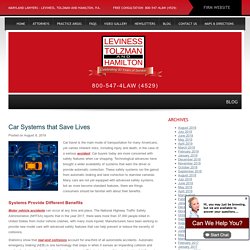 Car buyers today are more concerned with safety features when car shopping. Technological advances have brought a wider availability of systems that warn the driver or provide automatic correction. These safety systems run the gamut from automatic braking and lane correction to rearview cameras. Many cars are not yet equipped with advanced safety systems, but as more become standard features, there are things consumers should be familiar with about their benefits. Systems Provide Different Benefits. Cyclist and Pedestrian Deaths Increase. According to the National Highway Traffic Safety Administration (NHTSA), there was a 10 percent increase in the number of bicyclists killed last year, and the number of pedestrian deaths increased by four percent. 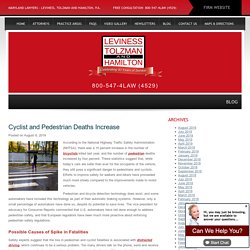 Updated Infrastructure Leads to Safer Roads. According to AAA, an estimated 3,185 lives could be saved each year by updating road infrastructure. 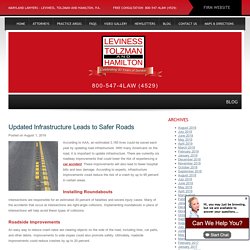 With many Americans on the road, it is important to update infrastructure. There are currently six roadway improvements that could lower the risk of experiencing a car accident. Safe Driving for Your Commute to Work. According to the Centers for Disease Control and Prevention (CDC), car accidents are one of the leading causes of death for Americans between the ages of one and 54. Approximately 37,000 people are killed each year in car accidents. If you are one of the millions of commuters who drive to work every day, there are some simple steps you can take to avoid being involved in a serious car accident on your way to or from work.

Even telecommuters who work from home can benefit from these safety tips. Vehicle Safety Today’s cars are safer than ever thanks to the latest advances in safety technology. Actor Sues Tesla After Defect Causes Serious Accident. The day after purchasing a new Tesla Model 3, Mena Massoud, the star of Disney’s live action “Aladdin,” was involved in a serious car accident. The actor was changing lanes on Hollywood Boulevard when the vehicle’s front wheel came off, causing the car to spin out of control and hit a tree. The insurance company found that Tesla was responsible for the accident. In a lawsuit filed against Tesla, Massoud claimed negligence, breach of warranty, and other allegations. According to documents obtained from Tesla, the Model S and X had suspension problems for years, but the company has never issued a recall. Tesla’s suspension issue has plagued Tesla for years. Maryland Increases Fine for Passing Stopped School Buses. Earlier this month, Maryland passed new legislation permanently increasing the fine for motorists passing a stopped school bus.

Drivers stopped by police for passing a stopped school bus with flashing red lights will receive a $500 fine. Baltimore Car Accident Lawyers. Numerous studies show that speeding is a contributing factor in many car accidents. Speeding also increases the likelihood of fatalities when an accident occurs. Sadly, a 14-year old pedestrian was recently struck and killed by a car when jogging across a crosswalk in Bowie, Maryland. Neighbors report that cars often speed on this road. Can My Car Color Influence Crash Risk? Baltimore Car Accident Lawyers. Whether you are a teenager getting your first driver’s license, or a well-established adult getting behind the wheel for the first time, attention to safety is essential to enjoying the experience. Driving is a privilege that offers independence and freedom, but it comes with a huge responsibility. Knowing the rules of the road and being aware of safe driving tips can ensure your protection as well as the safety of everyone on the road.