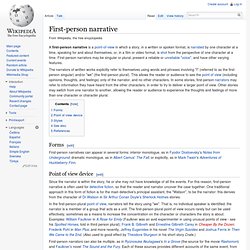 First-person narrators may be singular or plural, present a reliable or unreliable "voice", and have other varying features. The narrators of written works explicitly refer to themselves using words and phrases involving "I" (referred to as the first-person singular) and/or "we" (the first-person plural). This allows the reader or audience to see the point of view (including opinions, thoughts, and feelings) only of the narrator, and no other characters.

In some stories, first-person narrators may refer to information they have heard from the other characters, in order to try to deliver a larger point of view. Forms[edit] Point of view device[edit] In the first-person-plural point of view, narrators tell the story using "we". Notes. Bildungsroman. The Kite Runner by Khaled Hosseini CliffsNotes - Study Guide and Help.

The Kite Runner. Kiterunnertg0110a. Characters in The Kite Runner. Like most good narrator-protagonists, Amir is a fairly complex character because the reader not only has to pay attention to Amir's actions but also how Amir describes his actions. 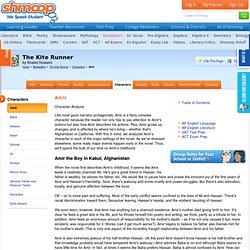 Plus, Amir grows up, changes, and is affected by where he's living – whether that's Afghanistan or California. With this in mind, we analyzed Amir's character in each of the major settings of the novel. As we've stressed elsewhere, some really major events happen early in the novel. Thus, we'll spend the bulk of our time on Amir's childhood. Amir the Boy in Kabul, Afghanistan When the novel first describes Amir's childhood, it seems like Amir leads a relatively charmed life. OK – on to more pain and suffering.

We soon learn, however, that Amir has anything but a charmed existence. Amir is also extremely jealous of his half-brother Hassan. All these tensions come to a breaking point during the kite-fighting tournament. The strange thing is that Amir's plan sort of works. The Kite Runner. 1. 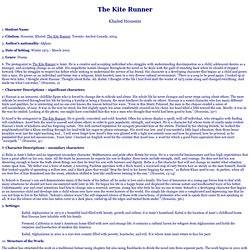 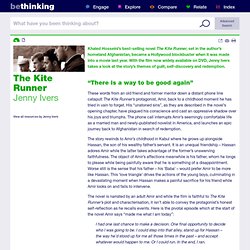 With the film now widely available on DVD, Jenny Ivers takes a look at the story’s themes of guilt, self-discovery and redemption. These words from an old friend and former mentor down a distant phone line catapult The Kite Runner’s protagonist, Amir, back to a childhood moment he has tried in vain to forget. His “unatoned sins”, as they are described in the novel’s opening chapter, have plagued his conscience and cast an oppressive shadow over his joys and triumphs. The phone call interrupts Amir’s seemingly comfortable life as a married man and newly-published novelist in America, and launches an epic journey back to Afghanistan in search of redemption.