How Dark Money Flows Through the Koch Network. No War on Iran. Corporation monsters. Illuminate. Untitled. Editor’s note The latest reports suggest 95% of voters have answered ‘yes’ to the autonomous republic of Crimea joining Russia with less than 5 percent of the vote in favor of remaining part of Ukraine. 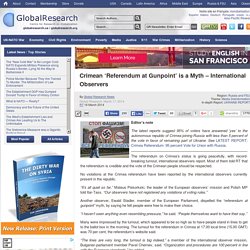 See LATEST REPORT: Crimea Referendum: 95 percent Vote for Union with Russia. The referendum on Crimea’s status is going peacefully, with record-breaking turnout, international observers report. Most of them told RT that the referendum is credible and the vote of the Crimean people should be respected. No violations at the Crimea referendum have been reported by the international observers currently present in the republic. ‘NATO’s broken promises bring world closer to global war’ Reba McEntire - Pray For Peace. 3 charged conspiring to smuggle chemical lab equipment to Syria. Published time: April 24, 2014 02:38 Edited time: April 24, 2014 05:23 William J. 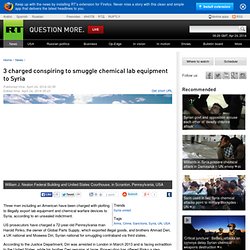 Nealon Federal Building and United States Courthouse, in Scranton, Pennsylvania, USA Three men including an American have been charged with plotting to illegally export lab equipment and chemical warfare devices to Syria, according to an unsealed indictment. US prosecutors have charged a 72-year-old Pennsylvania man Harold Rinko, the owner of Global Parts Supply, which exported illegal goods, and brothers Ahmad Deri, a UK national and Moawea Diri, Syrian national for smuggling contraband via third states. According to the Justice Department, Diri was arrested in London in March 2013 and is facing extradition to the United States, while his brother Deri remains at large. McCain meets with rebel leaders in Syria - The Hill's Global Affairs. Sen. 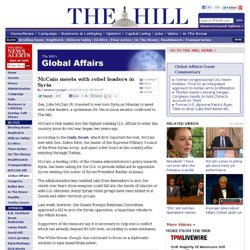 John McCain (R) traveled to war-torn Syria on Monday to meet with rebel leaders, a spokesman for the Arizona senator confirmed to The Hill. McCain's visit makes him the highest-ranking U.S. official to enter the country since its civil war began two years ago. According to the Daily Beast , which first reported the visit, McCain met with Gen. Syria crisis: Al-Nusra pledges allegiance to al-Qaeda. 10 April 2013Last updated at 18:29 ET Al-Nusra has been designated as a terrorist organisation by the US The leader of the al-Nusra Front, a jihadist group fighting in Syria, has pledged allegiance to the leader of al-Qaeda, Ayman al-Zawahiri. 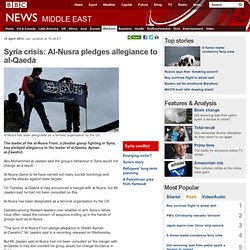 Abu Mohammed al-Jawlani said the group's behaviour in Syria would not change as a result. Al-Nusra claims to be have carried out many suicide bombings and guerrilla attacks against state targets. 10 False Flags that Changed the World. At it’s simplest, the term false flag means pretending to be the enemy. 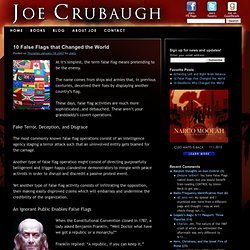 The name comes from ships and armies that, in previous centuries, deceived their foes by displaying another country’s flag. These days, false flag activities are much more sophisticated…and debauched. These aren’t your granddaddy’s covert operations. Fake Terror, Deception, and Disgrace The most commonly known false flag operations consist of an intelligence agency staging a terror attack such that an uninvolved entity gets blamed for the carnage. The Rape of Ukraine: Phase Two Begins. US drone warfare to last '15 years' US drone warfare to last '15 years' Thu Oct 25, 2012 7:1PM The U.S. drone war in Pakistan, Afghanistan, Yemen, Somalia, Libya, and other nations could last for "14-15 years," according to an American investigative journalist and Manager of Stop NATO. 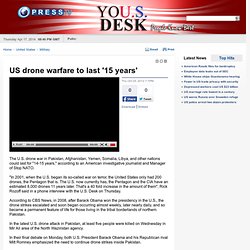 "In 2001, when the U.S. began its so-called war on terror, the United States only had 200 drones, the Pentagon that is. The U.S. now currently has, the Pentagon and the CIA have an estimated 8,000 drones 11 years later. That's a 40 fold increase in the amount of them", Rick Rozoff said in a phone interview with the U.S. According to CBS News, in 2008, after Barack Obama won the presidency in the U.S., the drone strikes escalated and soon began occurring almost weekly, later nearly daily, and so became a permanent feature of life for those living in the tribal borderlands of northern Pakistan. 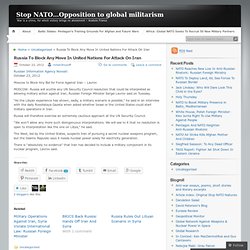 “As the Libyan experience has shown, sadly, a military scenario is possible,” he said in an interview with the daily Rossiiskaya Gazeta when asked whether Israel or the United States could start military operations in Iran. Syrian Crisis Part Of West’s Geopolitical Remapping Of Mideast: Russian Foreign Minister. Russian Information Agency Novosti October 22, 2012 Syrian Conflict Part of Mideast ‘Geopolitical Game’ – Lavrov Lavrov cited some unspecified opposition groups as telling Russia that Western countries urge them to continue the resistance, “to fight for their rights with arms until [President Bashar al-Assad’s] regime falls.” 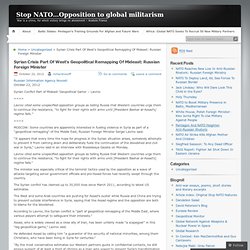 MOSCOW: Some countries are apparently interested in fueling violence in Syria as part of a “geopolitical remapping” of the Middle East, Russian Foreign Minister Sergei Lavrov said. “It appears that every time the hope for progress in the Syrian situation arises, somebody attempts to prevent it from calming down and deliberately fuels the continuation of the bloodshed and civil war in Syria,” Lavrov said in an interview with Rossiiskaya Gazeta on Monday. NATO’s Plans for Moldova May Trigger Another War. Pravda.Ru October 19, 2012 Moldova’s NATO dreams may trigger another war What is happening in the region is very disturbing. 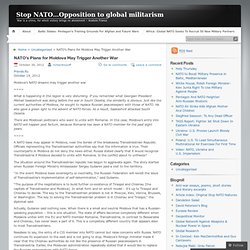 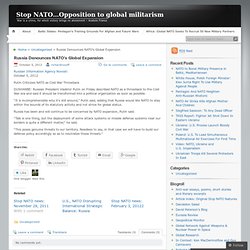 “It is incomprehensible why it’s still around,” Putin said, adding that Russia would like NATO to stay within the bounds of its statutory activity and not strive for global status. Russia has been and will continue to be concerned by NATO expansion, Putin said. “Talk is one thing, but the deployment of some attack systems or missile defense systems near our borders is quite a different matter,” he said. “This poses genuine threats to our territory. Time To Stop Drone Wars. Voice of Russia October 2, 2012 Isn’t it time to stop drone wars? Igor Siletsky The “effectiveness” of drones has been criticized by US participants of the military actions in Iraq and Afghanistan as well.

They say that in three years of wars in these countries, US drones killed only…14 terrorists. Meanwhile, the number of the civilians who were killed “in passing” was more than 700! [I]t still looks as if the US authorities care very little about a thousand or two killed innocent Iraqis, Libyans or Syrians. Drone Strikes “Barbarous, Unjust and Counter-Productive” 9/11: A Decade Later, A Whole New Ballgame. By Gordon Duff, Senior Editor First of all, to the idiots who monitor all our communications, internet, telephone, who knows how far they have gone or are going, do not think there aren’t lists of those who oppose this illegal effort and will see to it you are indicted.

If you believe the current form of government is going to be superseded by a corporate plutocracy as in the Canadian TV shown “Continuum,” (find it) you are mistaken. The old power bases are gone, too many have been burned. Russia Warns NATO, Gulf States Not To Invade Syria. Interfax October 2, 2012 Russia urges NATO, Middle East countries not to invade Syria Turkey: NATO’s Neo-Ottoman Spearhead in the Middle East Turkish Actions Designed To Trigger NATO Confrontation With Syria? Russia urges NATO and the countries of the Middle East not to look for pretexts to interfere in Syria militarily, Deputy Russian Foreign Minister Gennady Gatilov told reporters earlier today.

(109 unread) - leslymill - Yahoo! Mail. Afghanistan: spinning failure as success. The western media reports that this year alone there have been 37 attacks on the US, and its NATO and want-to-be-NATO allies, all part of George Bush’s coalition of the willing engaged in their endless world war on terror. Just like at the beginning of the invasion when the US and the Western media reacted with horror and indignation anytime the Afghans fought back, branding them enemy combatants then terrorists and hauling them off to their illegal torture prison, outside of the jurisdiction of international law, in Guantanamo Bay Cuba, the media in the West still don’t seem to get it.

They continue to react with shock and indignation whenever the Afghan “allies,” yes that is the term they use now for the countrymen of the country they invaded, attack the "coalition" forces. Let’s stop for a minute here and put things into the proper perspective. The media in the West complains that the spike in “insider” attacks is somehow who are fighting side by side.

Against whom? Leading Russian MP: West Risks Creating New Iraq, Libya In Syria. RT September 17, 2012 If Assad is ousted, radical Islamists will take over Syria – Russian MP. Georgia Gearing Up For New War: South Ossetian President. Republic News Agency September 18, 2012 Georgia is preparing seriously for a war – President of South Ossetia. Puppets, Lackeys And The Drums Of War. Reports: U.S., NATO Allies Preparing For Ground Assault In Syria. Diplomacy Behind Pakistan-Iran-Afghan Cooperation. Diplomacy Behind Pakistan-Iran-Afghan Cooperation By Sajjad Shaukat US bases in Afghanistan and the Gulf will enhance its ability to gather intelligence on Iran. In December, 2011, Iranian authorities recovered a CIA surveillance drone that had been launched from Afghanistan. Currently a war-like situation exists between Iran and America over the Persian Gulf and the nuclear programme of Tehran. An American aircraft carrier on February 15, 2011 joinined another US battle group already positioned in the region.

In response to this development, Iran’s Defense Minister Ahmad Vahidi already stated on February 14 that the US buildup and its military presence has “turned the Gulf into a weapons depot.” Cost of War to the United States. About | Embed | Localize | Military. Audio And Video: Veterans Return Medals During NATO Summit. Video: Nurses Lead Thousands In Chicago Anti-NATO March. Comment: When will NATO be abolished?