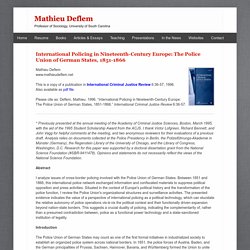 “International Policing in Nineteenth-Century Europe: The Police Union of German States, 1851-1866.” 6:36-57. Introduction. West Midlands Police Museum – Preserving police history in Birmingham. Crime and Justice - Policing in London. How Suspects were Apprehended The period from 1674 to 1913 witnessed the transformation of policing in London from a system that relied on private individuals and part-time officials, through the development of salaried officials and semi-official "thief-takers", to a modern professional police system. 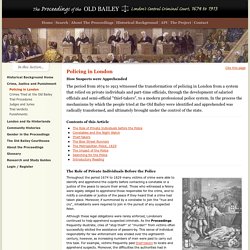 In the process the mechanisms by which the people tried at the Old Bailey were identified and apprehended was radically transformed, and ultimately brought under the control of the state. Contents of this Article The Role of Private Individuals Before the Police Throughout the period 1674 to 1829 many victims of crime were able to identify and apprehend the culprits before contacting a constable or a justice of the peace to secure their arrest. Although these legal obligations were rarely enforced, Londoners continued to help apprehend suspected criminals. How Sir Robert Peel Influenced Modern Policing.

Sir Robert Peel indisputably has wielded more influence on modern policing than anyone else. 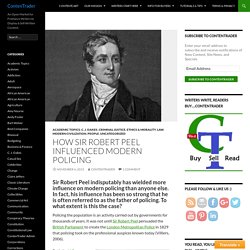 In fact, his influence has been so strong that he is often referred to as the father of policing. To what extent is this the case? Sir Robert Peel’s Nine Principles of Policing. Photo Police Commissioner lists the following guidelines on his blog. 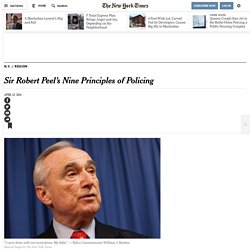 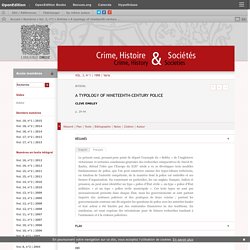 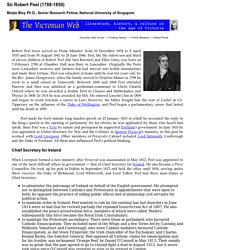 Peel, the the eldest son and third of eleven children of Robert Peel (the first Baronet) and Ellen Yates, was born on 5 February 1788 at Chamber Hall near Bury in Lancashire. Originally the Peels were Lancashire weavers and farmers but had moved into textile manufacture and made their fortune. Peel was educated at home until he was ten years old, by the Rev. James Hargreaves; when the family moved to Drayton Manor in 1798 he went to a small school in Tamworth. Between 1800 and 1804 Peel attended Harrow and then was admitted as a gentleman-commoner to Christ Church Oxford where he was awarded a double First in Classics and Mathematics and Physics in 1808. Peel made his forty-minute long maiden speech on 23 January 1810 in which he seconded the reply to the King's speech at the opening of parliament; for his efforts, he was applauded by those who heard him speak. The Metropolitan Police. Aprons are Defences; against injury to cleanliness, to safety, to modesty, sometimes to roguery. 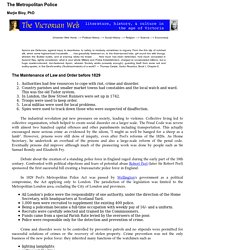 From the thin slip of notched silk, which some highest-bred housewife . . . has gracefully fastened on; to the thick-tanned hide, girt round him with thongs, wherein the Builder builds, and at evening sticks his trowel. . . . How much has been defended, how much concealed in Aprons! Nay, rightly considered, what is your whole Military and Police Establishment, charged at uncalculated millions, but a huge scarlet-coloured, iron-fastened Apron, wherein Society works (uneasily enough); guarding itself from some soil and smithy-sparks, in this Devil's-smithy (Teufelsschmiede) of a world?

— Thomas Carlyle, Sartor Resartus, Book I, Chapter 6. The Maintenance of Law and Order before 1829 Authorities had few resources to cope with riot, crime and disorder. The industrial revolution put new pressures on society, leading to violence. History - British History in depth: Crime and the Victorians. The Development of a Police Force - Victorian Crime and Punishment from E2BN.

Victorian prisons and punishments. Victorian citizens were worried about the rising crime rate. 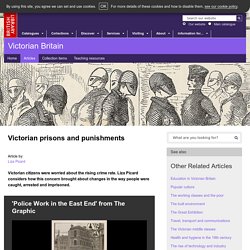 The Metropolitan Police. The Development of a Police Force - Victorian Crime and Punishment from E2BN.