Brave New World by Aldous Huxley : Barron's Notes. CONTENTS THE NOVEL The Plot The Characters Other Elements Setting Themes Style Point of View Form and Structure THE STORY THE NOVEL THE PLOT Brave New World is partly a statement of ideas (expressed by characters with no more depth than cartoon characters) and only partly a story with a plot. 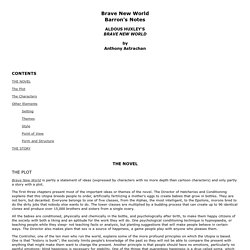 The first three chapters present most of the important ideas or themes of the novel. The Director of Hatcheries and Conditioning explains that this Utopia breeds people to order, artificially fertilizing a mother's eggs to create babies that grow in bottles. They are not born, but decanted. ....said "Damn, It is borne in on me that I am A creature that moves In predestinate grooves; I'm not even a bus, I'm a tram!

" To appreciate this joke, you have to remember how a tram or trolley car moves on its tracks. Orgy-porgy, Ford and fun, Kiss the girls and make them One. Aldous Huxley. Aldous Huxley An extensive collection of links: writing by Huxley, writing about Huxley, links related to Brave New World , and more. 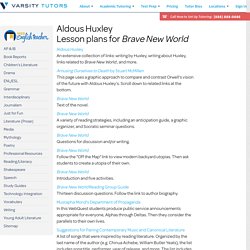 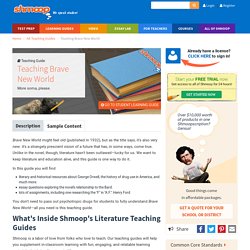 Sort of. Your students will watch and listen as a young Mike Wallace interviews Aldous Huxley in 1958. They'll answer critical questions about the interview, participate in classroom discussion, and then (dun-dun-dun) make a few of their own predictions for the future. As a final step, students will present one or more of their predictions to the class and see which predictions they believe are most likely to prove prophetic. Length of Lesson: 1-2 class periods. Materials Needed: Computer/internet access (to watch to Mike Wallace's interview with Aldous Huxley) Step 1: Let your students know you'll be watching a video today, but before you get into it, be sure to go over the study questions below. What forces and/or devices does Huxley identify as potential enemies of freedom in the U.S.? 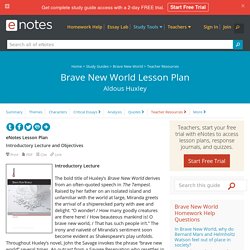 Raised by her father on an isolated island and unfamiliar with the world at large, Miranda greets the arrival of a shipwrecked party with awe and delight: “O wonder! / How many goodly creatures are there here! / How beauteous mankind is! O brave new world, / That has such people in’t.” One of the most influential and prolific literary minds of the mid-twentieth century, Aldous Huxley (1894-1963) strived to explore the meaning and possibilities of life from a variety of genres and perspectives. Huxley wrote Brave New World in part as a reaction against the proliferation of utopian novels by writers like H.G. Brave New World is set in London in AD 2540 following a war that decimated the world’s population. Like all dystopian fiction, Huxley’s novel deals with contemporary social issues. By the end of the unit the student will be able to: 1. 2. 3. 4. 5.