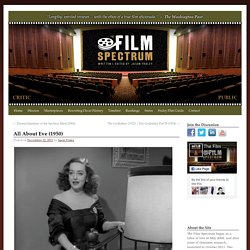 Screenplay. Critics' Picks: 'All About Eve' - NYTimes.com/video. Film Notes - All About Eve. All About Eve: An Analysis. To: Professor Koschmann From: Rebecca G. 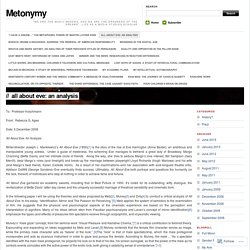 Agee Date: 6 December 2009 All About Eve: An Analysis Writer/director Joseph L. All About Eve garnered six academy awards, including that of Best Picture of 1950. In the following paper I will be using the theories and ideas proposed by Metz[2], Mulvey[3] and Doty[4] to conduct a critical analysis of All About Eve. All About Eve: Screenwriter. Legendary producer, screenwriter, and director—you'd never guess that Joseph L. 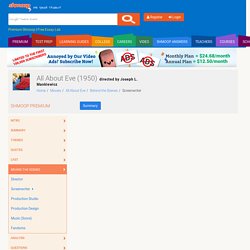 Mankiewicz's first film job was translating intertitles (those title cards used in silent movies to explain the action) from German into English. Hey, somebody had to do it. Mankiewicz was born in Wilkes-Barre, Pennsylvania on Feb. 11, 1909, where his father was a Professor of modern languages at a prep school there.

Considering the snide remark about Wilkes-Barre in All About Eve (Bill calls it "backward"), we doubt he liked it very much. But a love of languages must have run in the family. Mankiewicz started out writing dialogue at Paramount, then moved on to producing at MGM. Mankiewicz adapted All About Eve from a short story, "The Wisdom of Eve," written by Mary Orr and published in Cosmopolitan magazine in 1946 (Yes, that Cosmo. Studstudy: All About Eve (THEMES) The theme of identity is explored through the film. 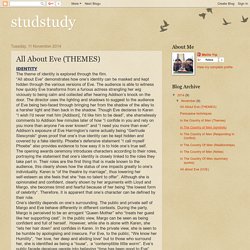 “All about Eve” demonstrates how one’s identity can be masked and kept hidden through the various versions of Eve. The audience is able to witness how quickly Eve transforms from a furious actress strangling her wig viciously to being calm and collected after hearing Addison’s knock on the door. The director uses the lighting and shadows to suggest to the audience of Eve being two-faced through bringing her from the shadow of the alley to a harsher light and then back in the shadow.

Though Eve declares to Karen “I wish I'd never met him [Addison], I'd like him to be dead”, she shamelessly comments to Addison few minutes later of how “I confide in you and rely on you more than anyone I've ever known!” And “I need you more than ever”. The opening awards ceremony introduces characters according to their roles, portraying the statement that one’s identity is closely linked to the roles they take part in. VCE All About Eve - Summary Notes. All About Eve ACMI booklet. All About Eve: views, values and critical scenes - English Works. Joseph Mankiewicz’s 1950’s melodrama All About Eve provides an insight into the qualities needed to succeed in the star-studded world of the theatre. 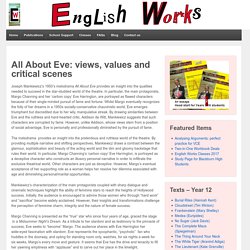 In particular, the main protagonists, Margo Channing and her ‘carbon copy’ Eve Harrington, are portrayed as flawed characters because of their single-minded pursuit of fame and fortune. Whilst Margo eventually recognizes the folly of her dreams in a 1950s socially-conservative chauvinistic world, Eve emerges triumphant but discredited due to her wily, manipulative streak. By drawing similarities between Eve and the ruthless and hard-hearted critic, Addison de Witt, Mankiewicz suggests that such characters are corrupted by fame. However, unlike Addison, whose views stem from a position of social advantage, Eve is personally and professionally diminished by the pursuit of fame. The melodrama provides an insight into the pretentious and ruthless world of the theatre. Eve cultivates her feminine charm and a façade of humility. Who is Margo? Key Quotes. Allabouteve1950 films. Film Study - All About Eve - English.